Polled Holsteins: Past, present and future

The use of polled genetics can be a “kill two birds with one stone” solution for dairy producers: It can relieve the onerous management task of dehorning calves and can also ease consumer concerns about a problematic animal welfare issue.

Holsteins make up by far the largest segment of the national dairy herd, so why aren’t polled animals more prevalent in the breed?

Generally, Holstein breeders have been reluctant to sacrifice genetic gain in order to select for a single trait, but with recent, rapid advancement in the genetic value of polled individuals, those producers are taking a second look at introducing this dominant trait into their herds.

While that exponential growth is impressive, polled animals account for only 1 percent of Holsteins registered with the association. As polled is a dominant gene, and as bulls can produce significantly more offspring than females, expansion in the polled population will undoubtedly come through greater use of polled sires.

According to the August 2016 genetic summary, there are 12 polled bulls that are active and available with milking daughters, and there are 136 polled genomic bulls available. Of these bulls, 23 are homozygous polled, meaning that all offspring of these sires will be polled.

The beginning of polled genetics at Burket Falls Farm

Burket Falls Farm in East Freedom, Pennsylvania, has been affiliated with breeding polled Holsteins as long as any breeder in the U.S. Dave Burket originally bought a group of registered Holsteins from Wisconsin in the early 1960s. One cow in that group had a calf that never grew horns, and that calf developed into the best cow in their herd.

Princess Fayne Houwtje made seven consecutive records over 1,000 pounds of fat, and her polled son, Burkett Falls ABC, was used heavily in the herd and was later leased to ABS – the first-known polled Holstein to enter A.I.

At this time, their 100-cow herd is 90 percent polled, but Dave’s son, John Burket, maintains that their constant goal has been to breed a good cow, not just a polled cow.

“My dad always traveled and looked for polled animals to add to the herd for outcross breeding, but often that individual was not good enough to enter the herd,” Burket states. “We always used the most popular A.I. bulls and enveloped them into the polled segment of our herd in order to keep abreast of current genetics.”

Over the years, the Burkets have seen the enthusiasm for polled cattle run hot and cold, especially with domestic A.I. organizations. “We’ve always battled the misconception that the polled gene is somehow related to beef cattle.

Dr. Larry Specht at Penn State University has researched the history of the polled Holstein and has traced the gene back 23 generations in the breed,” according to Burket.

The greatest enthusiasm for the Burket Farm genetics came from Europe. “They aggressively selected for the trait, and now they are years ahead of us as far as polled genetics. Animal welfare legislation in Europe based on consumer pressure will drive even further use of polled.”

From the European perspective, Hendrik Albada, co-owner of the Hul-Stein herd in the Netherlands, agrees. “Legislation in Europe increases the cost of dehorning. In some countries, dairymen have to use local anesthesia and painkillers when dehorning calves. Pressure from consumers and animal welfare organizations see dehorning as an unnecessary intervention in a calf’s life, which can result in legislation.”

Beyond the legal push on producers, Albada emphasizes that polled sires are popular in Europe based on genetic merit alone – almost 10 percent of the cows in Germany last year were bred to a polled bull.

“Due to tremendous efforts and selection of breeders on both sides of the pond, the genetic level of polled males and females is higher than ever. For example, last year in Germany, the highest Red bull with semen available was a polled bull (Apoll P-Red), and this year his high-testing polled offspring have topped many sales.

At this moment, one of the highest bulls in the German RZG system, Mission P, scores +162 RZG which ranks quite closely to the highest ranking bulls who come in around +165 RZG,” Albada says.

He feels the future is wide open for continued growth of the polled Holstein population in Europe. “For commercial dairymen, the added value of polled will become big when there are competitive homozygous polled bulls.

On this point, Dean Zimmer of Zimmerview Dairy Farm LLC, a 400-cow registered Holstein operation in Marietta, Ohio, is in full agreement. “I think the ‘index gap’ between polled cattle and the overall cattle population is closing quickly.

Polled cattle have reached a position now where you do not have to compromise many other good traits just to get a polled animal.” Dean and Brent Zimmer brought polled genetics into the herd about five years ago, and now their prefix is sprinkled throughout the top polled GTPI lists, especially those polled cattle that also are red or red carrier.

“We became more motivated to get involved with polled genetics as the market for it began to rise. We had two cows that really gave us a jumpstart into the polled market: S-S-I Mogul Lyla *PO (VG-88) and Zimmerview Symptc Remmy-Red *PO,” Zimmer notes.

The results of their breeding decisions with these two cows are prominent. Zimmerview Rubicon Lyssa P-ET is a top polled GTPI heifer at +2629, and Zimmerview Jax P Ready PP-ET *RC is the top homozygous polled red carrier heifer at +2493 GTPI.

Additionally, Lyla and Remmy-Red have sent sons to A.I., where Dean Zimmer sees a growing interest for polled genetics.

While the herd is not yet 100 percent polled, and they don’t foresee that in the near future, the Zimmers, like the Burkets, strive to breed a complete cow. “We would like to bring good, sound and functional type to the polled population so that they are not only polled but also respectable show animals,” Zimmer explains. 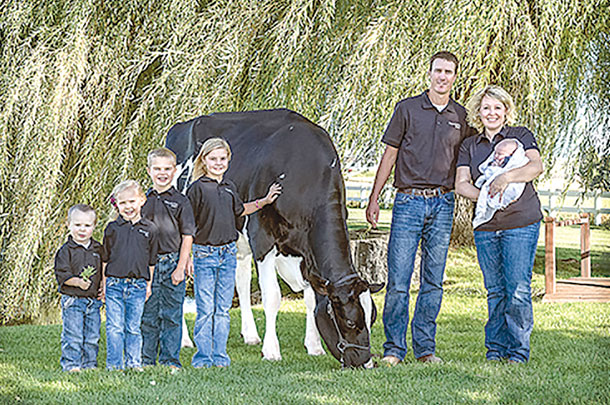 Greg Andersen of Seagull Bay Dairy in American Falls, Idaho, operates a well-known breeding program that has produced a number of popular high-GTPI A.I. bulls including Supersire, Silver, Charismatic and Headliner, to name a few. He and his family have been willing to invest in breed-leading genetics in the past and relatively recently turned their attention to polled genetics.

“We’ve been working with polled Holsteins for the last three years. We could see the potential increase in demand for polled genetics, so we purchased a few of the very best polled females in the breed and have tried to make improvement with those lines.

It’s not enough just to be polled – the animal needs to be special in her own right and then, if the polled trait is also present, it makes for something extra-special. Polled is still a niche, but the potential for it to become mainstream is very likely. Seagull Bay Dairy would like to be leaders in breeding polled males and females that are at a genetic level equal to the best horned animals,” Andersen states.

Early results of their polled breeding program have been impressive, with five of the top six homozygous polled GTPI heifers from the August 2016 genetic evaluation carrying the Seagull-Bay prefix. Seagull-Bay Roxy PP-ET at +2599 GTPI is No. 1 on that list. She is a daughter of View-Home Powerball-P-ET, a breakthrough polled sire that came into service in 2014.

Andersen has a long-term view of polled genetics gaining in popularity as genetic levels near those of the overall leaders in the Holstein population. Andersen asserts, “The future of polled Holsteins will be determined by the speed of genetic progress of the polled population. It’s not good enough to just be polled.

Dehorning is easy and inexpensive when done properly. Heterozygous polled also doesn’t have wide appeal to commercial dairymen because only 50 percent of the offspring will be hornless. For polled to become widely popular, we need to have a good selection of true polled sires that are within 10 percent total merit of the top horned sires.

The best heterozygous males and females are most valuable when used to create the next generation of heterozygous and homozygous polled calves. Polled genetics are still in its infancy but have great potential for mainstream use in the future. This will take at least 15 years in my opinion.”

But there’s no need to wait to begin breeding for hornlessness. Andersen says there are currently polled bulls available that deliver on the whole package of desirable traits. He adds, “Dairymen that wish to begin utilizing polled sires can find some sires with good total merit index.

Kathleen O’Keefe is a freelance writer from Hammond, Wisconsin

PHOTO 1: Burket Falls Farm is credited as one of the pioneers in polled Holstein genetics. Pictured here is Dave Burket (left) and his son John (right). Photo provided by Burket family.

PHOTO 2: Greg Andersen , pictured here with his wife Tena and family are co-owners and operators of Seagull Bay Dairy – the breeders of the number one GTPI homozygous polled heifer in the Holstein breed. Photo by Frank Robinson.