Lower dairy product prices resulted in lower revenue for most dairy cooperatives in 2016, according to an annual report from the National Cooperative Bank. With the revenue decline, fewer dairy co-ops were listed among the nation's 100 largest cooperatives.

The report, which ranks all agricultural co-ops based on business volume and total assets, is released annually as part of the October National Cooperative Month observance.

Sixteen dairy cooperatives made the “Top 100” list for 2016 business volume, down from 21 the year before (Table 1). Business volume includes sum of total sales, service receipts, patronage income and non-operating income. 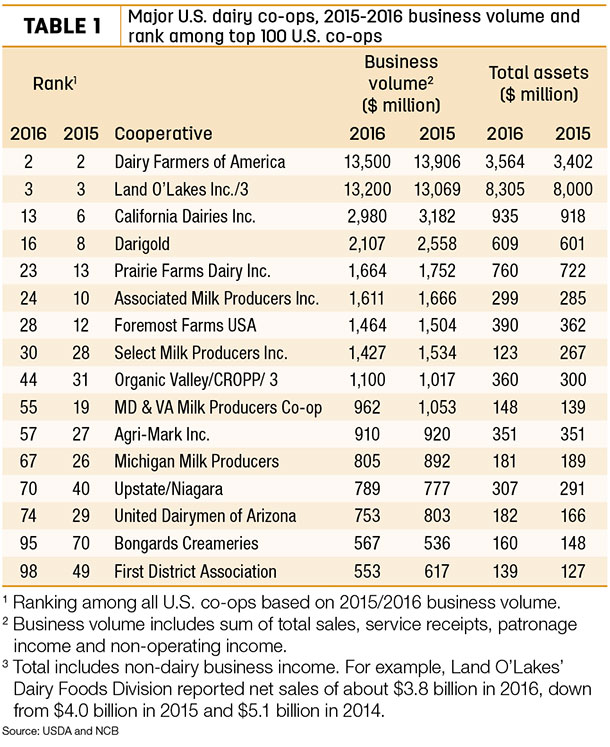 Among the largest dairy co-ops, Dairy Farmers of America and Land O’Lakes held their positions.

Cooperatives voluntarily submit revenue and asset information to NCB for the report, and two large dairy co-ops absent from the list, Southeast Milk Inc. (SMI) and Tillamook County Creamery, did not submit data for 2016, according to Barry Silver, who has been compiling the list for more than 30 years. Based on industry estimates, both would have made the Top 100.

Others not listed in 2016 were NFO Inc., Lone Star Milk Producers, St. Albans Creamery and Swiss Valley Farms, which merged with Prairie Farms in 2016.

Due to weaker dairy commodity prices last year, most co-ops saw reduced gross revenue in 2016. However, with agricultural commodity prices generally lower across the board, most ag co-ops on the 2016 list also saw declining revenues.

Among all dairy co-ops listed, year-to-year changes in total assets were relatively small.

The Top 100 list includes co-ops involved in a wide range of businesses. Fifty-two agricultural co-ops made the Top 100 list, followed by 20 energy and communications co-ops. Grocery and finance co-ops had 10 each.

CHS Inc., a fuel, grain and food cooperative based in Inver Grove Heights, Minnesota, remains the nation's largest U.S. cooperative, with $30.3 billion in total business volume in 2016. That was down from $34.7 billion in 2015.