Used track tractors are hot in the equipment auction marketplace. Could it be because there aren’t many out there? To humorously illustrate their demand, Peterson noted a husband and wife team at a retirement auction last November who were celebrating their 25th wedding anniversary. The husband said, “Maybe I ought to buy you a diamond ring,” and his wife lovingly responded, “To heck with that, I want a quad track.”

Quad tracks are popular for their ability to distribute weight, reducing the depth of ruts and compaction, and reducing fuel costs (reported average 11 to 15 percent savings). One manufacturing company reported their research showed a 70,000-pound load on tilled ground is 50 percent easier to pull than the same load pulled with wheels in the same conditions.

Older grinder and mixers, if they’re in good shape, can bring a lot of interest in auction prices, Peterson said. The biggest trend right now is good-condition equipment about 8 to 12 years old, even in a difficult economy.

“On the equipment side, we’re not seeing values dive, even in a poor economy,” Peterson said, “but that remains true to the past history.” Equipment still wears out whether commodity prices are up or down, and equipment has to be replaced. There’s a myth that when times are tight, farmers won’t spend dollars on equipment, but the truth is that when times are tough in ag, a greater emphasis shifts to finding and buying the best-quality used equipment. Therefore, good clean equipment with low hours never seems to have trouble selling.

Nice older trucks with reasonable miles on them are red hot in the market, Peterson noted. Without expounding on truck types or features, Peterson encouraged farmers to do as Marie Kondo’s video on Netflix, “Tidying Up,” recommends. “Her thing is de-cluttering: Take an assessment of your stuff and say ‘Does this thing bring me joy?’ and if not, get rid of it. We can’t hold up a tractor and ask if it brings us joy,” Peterson said, “but we can ask essentially the same question.” In light of red-hot truck sales, he encouraged farmers to de-clutter or “clean out the closets” (or bone yards).

How to spot the trends

Peterson said he uses a ratio that compares auction prices to dealer advertising prices. Over the last 20 years, the normal ratio is 71 to 76 percent. In 2014 to 2015, when the ag market was tanking, the ratio was in the 60th percentile because dealer pricing hadn’t adjusted yet.

For instance, “If you pressed me, I’d have to say 2018 was the year of the combine,” Peterson said. In November 2018, the ratio for the 2018 JD S770 combine was 88.6 percent, indicating incredible demand for 10-year-old combines in good condition. The 2018 fourth-quarter buyer demand was up 48.6 percent compared with the third quarter of 2018, and up 6 percent compared with the fourth quarter of 2017.

“But right now, we’re at 81.3 percent,” Peterson said of the overall used farm equipment market. “When you get over 80 percent, that’s a high-end used market. If it’s in good shape and about 8 to 12 years old, that’s where the demand is.”

For buyers and sellers, Peterson recommended farmers “do the math,” or calculate their own ratios by finding a similar piece of equipment, find the auction price and get an average dealer pricing, then calculate the ratio.

Overall trends in used equipment from the end of 2017 through the first quarter of 2019 show prices continuing to creep upward. “People still need upgrades,” was Peterson’s comment on the trend.

He also suggested searching auction traffic patterns to see where the trends are, such as those in Table 1. 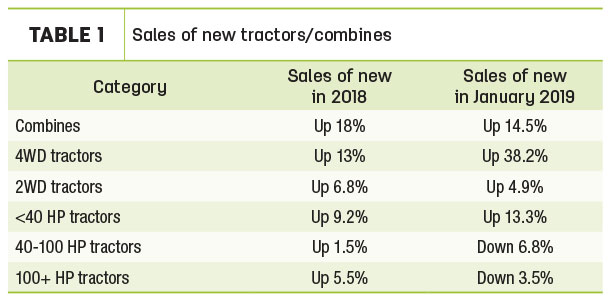 One pattern Peterson noted was average prices on four-wheel-drive model tractors that fell harder on 4- to 6-year-old models, a 12.4 percent drop. However, backing up one more model era to the 8- to 10-plus range didn’t show the same decline.

The market for tractors of 100 horsepower and under slipped a little in the last two quarters of 2018. However, Peterson said, “so did the stock market, and if you’re a hobby farmer and have a job in town but are looking for a tractor, your 401K took a hit in the fourth quarter, and there’s been some market uncertainty. That shows up here.”

Peterson said there are a number of factors that will influence the used ag equipment market in the next few years which are worth paying attention to:

It’s all about efficiency and the return on investment. “The demand for good-condition used equipment, I think, we’ll see that again in 2019,” Peterson said. Good, clean, low-hour used equipment always sells well.

Peterson recommended two key factors that always boost sale prices – a preview video and a warranty. He said time and again auction prices go higher when a warranty accompanies the equipment. He also noted that preview videos personalize the equipment and can be powerfully factored into the buying equation. With the commonality of cell phone video capabilities, he recommended putting the producer with his equipment on video, while talking about the equipment.

Peterson also noted that November and December are still the best selling periods for equipment auctions, and adds, “… but good-conditioned stuff will be all right whenever you sell.”