Citing U.S. Department of Transportation (DOT) statistics, Nigh explained that a border shutdown or even a limited port closure would have affected U.S. ag producers differently based on commodity, season and location. Knowing more about the flow of agricultural products through different ports is important when considering potential traffic and commercial delays along the Southern border as a result of a border closure, she said.

That data analyzes two-way agricultural trade across the border in 2018, noting 69 percent occurs by truck, 20 percent by rail, 9 percent by vessel and 2 percent by other means, including air. Grain transport relies most heavily on rail, while other commodities, including dairy, rely more heavily on trucks. Mexico is the largest export market for U.S. dairy.

Beyond the mode of transportation, DOT data tracks commodity trading patterns through specific “ports” in four U.S. states, including 13 in Texas, six each in California and Arizona, and three in New Mexico. 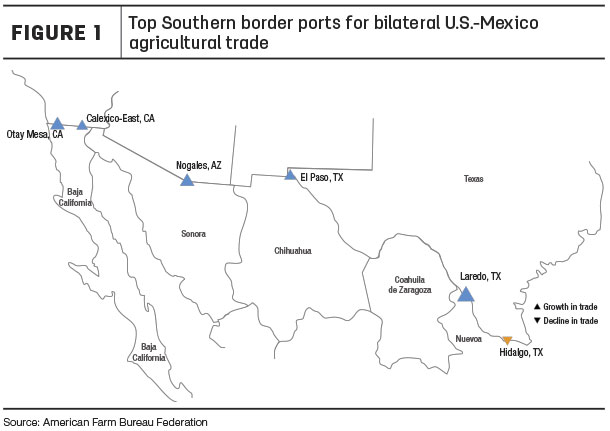 The ports along the Southern border are not close to one another (Figure 1). Further, port facilities are equipped differently. El Paso, which handles a large number of live animals, has different equipment and personnel than does Laredo, with its refrigeration capabilities. So if a port is closed, trucks will not necessarily divert to another port, but instead will sit and wait, adding to transit times and cost while subtracting from fresh days on market and supplier reliability. These impacts will be felt by exporters and customers on both sides of the border, Nigh concludes.

President Trump later said that he would delay action by one year on his threat to close the border, helping defuse some of the concern expressed by U.S. dairy suppliers.

The USDA announced the availability of $1.5 million in competitive grant funding through the Dairy Business Innovation (DBI) Initiatives program.

Authorized through the 2018 Farm Bill, DBI supports the USDA’s efforts to reduce risk and develop higher-value uses for dairy products, diversify farmer income through processing and marketing innovation, and encourage the use of regional milk production.

The DBI Initiatives are expected to provide direct technical assistance and make grants to dairy businesses. Initiatives must be positioned to draw on existing dairy industry resources, including dairy farm density and farmland suitability for dairying, as well as activities conducted by dairy promotion and research programs, research organizations, dairy businesses, or academic and industry stakeholders.

Initiatives may serve a certain product niche, such as specialty cheese, or serve dairy businesses with dairy products derived from the milk of a specific type of dairy animal, including products made from cow, sheep and goat milk.

The deadline for electronic applications is June 17. For more information about grant eligibility, email or visit DBI Initiatives.

Limits raised on farm loans available through the USDA

Higher limits are now available for borrowers interested in using USDA Farm Service Agency (FSA) direct or guaranteed farm loans to purchase farms or cover operating expenses. The 2018 Farm Bill also made changes to other loans, such as microloans and emergency loans.

Overall, 140 ballots were mailed to producers for the referendum, held March 1-30. State law requires at least two-thirds of the producers voting must vote in favor of continuing the organization. The 52 dairy producers returning ballots voted unanimously in favor of ACCM; 88 ballots were not returned.

Federal law requires U.S. dairy producers to pay 15 cents per hundredweight (cwt) into the national dairy checkoff program. Through ACCM and other “qualified” state and regional programs, 10 cents of the 15-cent checkoff remains at the local level.

More school students may be stopping at Grab-n-Go breakfast carts before heading to their first class, thanks to GENYOUth, a nonprofit organization founded through the dairy checkoff.

Grab-n-Go school breakfast carts were installed in 200 schools over the 2017-18 and 2018-19 school years. The carts provide access to milk and other nutritious foods for about 70,000 students on a daily basis and are estimated to serve about 5.8 million pounds of milk annually.

The carts feature a Fuel Up to Play 60 logo and offer a serving of milk, fruit, whole grain and a meat alternative option (which could be smoothies, yogurt parfaits or cheese) with each breakfast. Each cart features a cooler to keep the dairy foods cold. Foods served from the carts are provided as part of USDA’s School Breakfast Program and meet the federal nutrition guidelines.

All schools that receive the carts participate in Fuel Up to Play 60, a youth wellness program founded through National Dairy Council and the NFL, in collaboration with the USDA.

According to research conducted by the Food Research and Action Center (FRAC), innovative practices of serving food at school are critical for students who are prone to skipping breakfast. That includes many who come from food-insecure households, said Ann Marie Krautheim, RD, GENYOUth’s president and chief wellness officer.

Attorneys general from six states and the District of Columbia filed a lawsuit alleging that the USDA failed to provide the pubic an opportunity for comment before adjusting federal nutritional standards for school breakfast and lunches.

On Dec. 12, 2018, the USDA published a final rule that provided schools new options under the National School Lunch Program, School Breakfast Program and other federal child nutrition programs. The new rule allowed schools the ability to offer flavored, low-fat milk, required that half of the weekly grains in the school lunch and breakfast menu be whole grain rich and granted schools more time to reduce sodium levels in school meals.

The suit (New York v. USDA, Case 1:19-cv-02956) specifically calls out the changes made to the sodium provisions. According to the attorneys general from California, New York, Illinois, Minnesota, New Mexico and Vermont, the USDA failed to give the public notice and an opportunity to comment on those 2018 changes, as required by the Administrative Procedure Act.

Prices for most major product categories were higher:

Last year’s total number of dairy cull cows sent to slaughter was the highest in more than three decades, and total cow slaughter (beef and dairy) was the highest since 2013. This year’s cull cow (dairy and beef) slaughter is expected to be above 2018 levels, according to the USDA’s latest Livestock, Dairy and Poultry Outlook report, released April 15.

While dairy cow culling rates have been notably higher as dairy producers respond to sustained low returns on milk, beef cow slaughter has also been up. The heavier supplies are expected to keep cull cow prices under pressure as the year progresses, despite lower carcass weights for fed cattle.

Based on the expected increase in cow slaughter, the price forecast for live cutter cows was lowered to $52 to $54 per cwt. This is below the 2018 average of $57.43 per cwt and well below the five-year average price of $79.22 per cwt.

Supply management programs, which provide incentives or penalties to limit perceived overproduction, have been used previously in the U.S. with mixed results, according to John Newton, chief economist with the American Farm Bureau Federation (AFBF). Writing in the AFBF’s Market Intel blog, Newton reviewed previous attempts to manage the U.S. milk supply.

The milk diversion program, the milk termination program and the herd-buyout program all contributed to fewer milking cows, but without industry-wide participation suffered from free rider, adverse selection and moral hazard problems. Overbase programs are likely successful at balancing regional supply and demand constraints, but without regionwide or national participation, they are unlikely to have the desired effect of lifting average milk prices in the current end-product pricing scheme, he said.

A group of California dairy producers has submitted a petition to the California Department of Food and Agriculture (CDFA), requesting a referendum to terminate the state’s Quota Implementation Plan (QIP). According to the cover letter from Kristin Hagan, an attorney with Hagan Law Group, Bakersfield, California, the petition is signed by 285 California producers, exceeding the minimum 25 percent necessary to request a referendum. (See background information on the CDFA website, under the QIP tab.)

The petition drive was initiated by the “Stop QIP Dairy Tax” coalition, which contends the QIP financially hurts dairy farmers who hold little or no quota.

“We want to terminate the QIP and level the playing field for all dairymen once and for all,” said dairy farmer and petitioner Eugenio Azevedo. “The QIP has become nothing more than an entitlement program for some dairy producers.”

California’s quota system came about in the late 1960s as a means of compensating milk producers selling into the higher Class I market, to gain their support for establishing a state marketing order. Under that system, milk was pooled and payments were distributed more evenly to producers of milk across all utilizations. Quota certificate holders received $1.70 per cwt above the state blend price for the amount of milk covered by their certificate. Quota certificates can be transferred or sold.

With California’s move into the Federal Milk Marketing Order (FMMO) system, a stand-alone QIP, administered separately by CDFA, was approved in a statewide referendum in 2017. Currently, all Grade A milk pooled on the California FMMO is assessed 38 cents per cwt, but only producers holding quota receive payment from that fund.

The “Stop QIP Dairy Tax” coalition estimated the total payments equal about $12 million per month. Because the QIP payment lowers the amount of money left in the pool, it reduces the overbase price received by other producers.

CDFA also posted an official "Department Procedures for Handling Petitions Requesting Changes to or Termination of the Quota Implementation Plan," developed by the Producer Review Board. According to guidelines, CDFA has 90 days to verify and quantify petition signatures to determine if the minimum 25 percent of California milk producer threshold is met. If met, the Producer Review Board has 60 days to make a recommendation to CDFA regarding a referendum. The CDFA secretary has 30 days to review the recommendation and, if it is determined to proceed with a referendum, has another 45 days to initiate the referendum process.