“Dairy Forward” was the theme of the event, which was packed full of opportunities to dive into the issues and topics on dairy farmers’ minds. Offering more than 30 breakout sessions, 15 hands-on learning hubs and four main-stage speakers, the annual event delivered on its promise.

Economics, finances and the future

Renowned agriculture economist and former Virginia Tech professor David Kohl shared his observations and outlook on the current ag cycle with the audience.

Kohl said the dairy industry was in its fourth year of an economic “reset,” marked by low margins and high volatility. While previous downturns took out the low-to-average production managers, the latest cycle is taking out the low-to-average business manager, he said. Kohl urged PDPW members to pursue a high business IQ, manage “around the uncontrollables” and focus on interdependence rather than independence – using a network of people to help each other stay positive.

“Planning, strategizing, executing and monitoring are the four cornerstones of financial IQ,” Kohl said during his conference kickoff.

To maximize dairy business profitability, all investment areas on the farm must be running at economic capacity, Karszes said. He urged PDPW members to investigate individual areas of their businesses that might be holding them back.

“A parlor is not a stand-alone business,” he said. “For the parlor to run at capacity, it needs cows. That means barns, youngstock, machinery. How do they interact with each other? When we see all areas of a business running at economic capacity, that’s when we see maximum profit. And when we look at all the numbers, the total is actually greater than the sum of individual parts.” 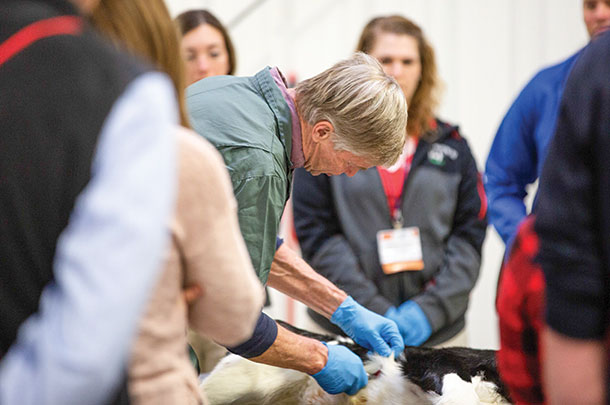 “It’s the little things that add up – and make the difference between capturing or losing profits,” Karszes said.

Frank Mitloehner, professor and air quality specialist in the department of animal science at the University of California – Davis, separated fact from fiction in the ongoing public debate over dairy and animal agriculture’s impact on global climate change and the carbon footprint.

Based on a recent International Consumer Attitudes Survey, he said 95 percent of current food-buying decisions are based on taste, food, cost, nutrition and brand; about 4 percent are based on lifestyle criteria (organic, local, gourmet); and 1 percent are “fringe” decisions made by people who favor food bans, restrictions on livestock management practices and meat taxes due to ideology. That 1 percent is effective in communicating fear and falsehoods with a goal of eliminating animal agriculture.

“We in agriculture spend an enormous amount of time refuting and rebutting the 1 percent of the total population,” Mitloehner said. He urged PDPW members to learn the facts and become acquainted with social media tools, including Twitter, to communicate within social circles and family. “If you are quiet, guess who isn’t? They are being as vocal as they can be,” he said.

Mitloehner countered “flawed” research that overstates the negative impact of animal agriculture on climate change. He said the portion of total greenhouse gas emissions from U.S. animal agriculture is actually about 3.9 percent compared to about 75 percent from fossil fuels used in transportation, power generation and industry. And due to its efficiency of meat and milk production, the U.S. is the “gold standard” for its carbon footprint per unit of milk and meat production.

In a separate presentation, Mitloehner also refuted claims related to animal agriculture’s methane contributions to total greenhouse gas emissions. He said methane’s production-to-destruction cycle, and its short life cycle of about 10 years, is dwarfed by emissions of carbon dioxide and nitrous oxide.

Messages from inspirational individuals motivated attendees to look beyond their limitations and aspire to be the best version of themselves. Best-selling author Scott Burrows told the audience how he “found his grit” after a car accident left him paralyzed from the chest down at age 19. Former NFL running back and ESPN analyst Merril Hoge shared his cancer comeback story, and Vietnam War veteran Richard Pimentel encouraged listeners to “find their why” as he detailed his experience developing programs to increase job placement and training opportunities for disabled employees.

Members recognized for service and leadership

Deb Reinhart, executive director of Professional Dairy Producers Foundation, was recognized for her years of service to the dairy industry and her influential role in establishing, volunteering for and managing the foundation since its creation in 2002. She has served as the foundation’s full-time director since 2005 and will now transition the role to Janet Keller. 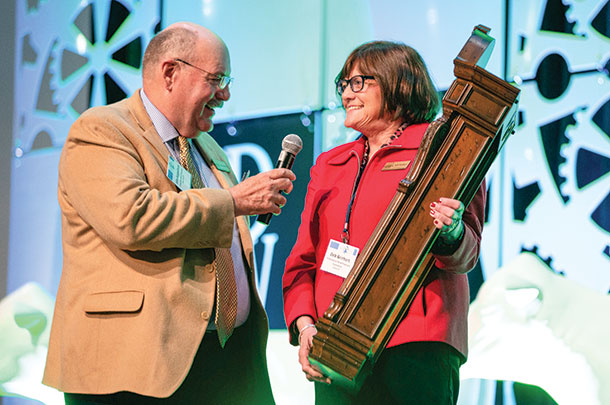 PDPW bestowed the Timeless Leader award to George Twohig in recognition of his steadfast support of the PDPW membership and its mission to share ideas, solutions, resources and experiences that help dairy producers succeed. An attorney and shareholder in the law firm of Twohig Rietbrock Schneider & Halbach, S.C, Twohig was instrumental in the legal organization of Professional Dairy Producers when it was established more than 25 years ago.

Members elected a trio of new representatives to serve three-year terms on the organization’s board of directors: 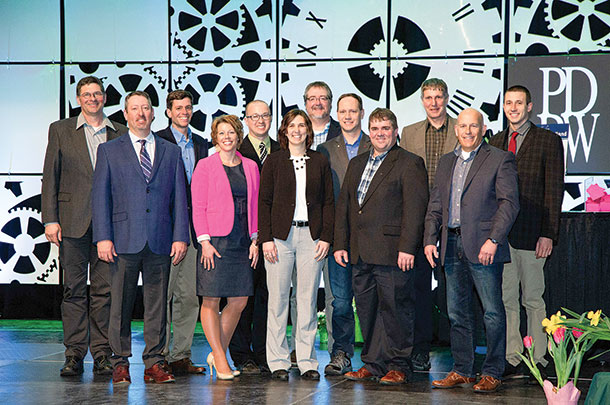 During the annual conference, two groups representing the future leaders of the dairy industry were recognized.

A dozen dairy farmers and industry professionals graduated from the Cornerstone Dairy Academy, signifying the completion of a three-pillar program focused on professional development and training.

Also honored were the 2019 mentor program participants. Nearly 50 students from colleges, technical schools and short courses were paired with one of 45 mentor host farms. The students job-shadowed the dairy producers earlier this year, and both student and host were reunited for a breakfast program at the business conference.

The event concluded with the announcement of the theme for next year’s annual business conference, Focus: 2020, which will take place March 18-19, 2020, at the Alliant Energy Center, Madison, Wisconsin.

PHOTO 1: Nearly 50 college, technical school and short course students participated in the 2019 Mentor Program. The students reunited with their host farms for breakfast during the conference.

PHOTO 3: Deb Reinhart was recognized for her service to the PDPW Foundation board. John Kappleman presented the award.