Karena Elliott
Art and Renee Schaap are living a nightmare. Last summer, their farm’s water wells were found to be contaminated with chemicals from the adjacent Canon Air Force Base. And things have quickly gone from bad to worse for the fourth-generation dairyman and his family.
Karena Elliott

Clean water is vital for all dairy operations. But in a county that receives less than 18 inches of rain annually, Schaap’s wells are crucial for his crops, his cows and his family’s drinking water.

The contamination has affected every aspect of Schaap’s life. He and his wife have both tested positive for elevated levels of the toxic compounds in their bodies. And the poison is also in their soil, their crops and their cows, in addition to their wells.

Schaap has been dumping milk from the 2,000-cow milking herd into his manure lagoon since Oct. 30, 2018. Over 1,000 heifers are still being fed with no hope of selling or bringing them into production. Nine hundred calf hutches stand empty. Thirty-five employees have lost their jobs.

Schaap’s father moved his family from the Netherlands to California before establishing Highland Dairy outside Clovis, New Mexico, almost 30 years ago. Art and Renee’s son Ryan and his wife, Sarah, dairy with them now.

A total of 30 groundwater wells are spread across Schaap’s 3,600 acres of dusty High Plains terrain. Three of those wells have historically been used for livestock, and the remaining 27 wells supply irrigation water for crops. They grow sorghum, corn and wheat for silage, in addition to alfalfa. All the wells draw from the Ogallala Aquifer.

“The Air Force came over last August and wanted to check my wells,” Schaap describes. “They had come to us before and wanted to check our water, so we weren’t worried.” The dairyman signed a paper granting them access at the time and went back to work. Officials checked the water at the dairy and in his brick house, located directly in front of the milk barn. “They were only looking at water being consumed by humans,” he recalls. “I didn’t think anything of it.”

Within a month, the Air Force was back with results from the water tests, and the Schaaps’ world would never be the same. “They said, ‘We need to start supplying you with bottled water for your people at the dairy and your house.’”

“The first thing I asked was, ‘What’s in the water?’” he recalls. Test results from the wells identified per- and poly-fluoroalkyl substances commonly referred to as PFAS. The EPA currently recommends PFAS levels in drinking water not exceed more than 70 parts per trillion, which has been described as about a grain of sand in an Olympic-sized swimming pool. The Schaaps’ water tested more than 170 times that amount.

Although the family of chemicals has been manufactured for more than 70 years and appears in products as common as non-stick cookware and Scotchgard fabric protectant, there is little definitive information on the long-term health risks from exposure for humans. Relatively nothing is known about the effects on cows.

PFAS chemicals are a component of fire-fighting foams used at Canon Air Force Base since the 1970s. Searchlight New Mexico reported in March 2018 that PFAS contamination was detected at 121 military sites across the U.S. At least 564 drinking water supplies in nearby communities exceed the EPA’s health advisory levels.

Schaap moved quickly to determine the effect of PFAS on his herd. He shut down the contaminated wells and had local veterinarians run blood tests on a random sample of his animals, which he sent to the Food Safety Inspection Service (FSIS). He also contacted the New Mexico Department of Agriculture. 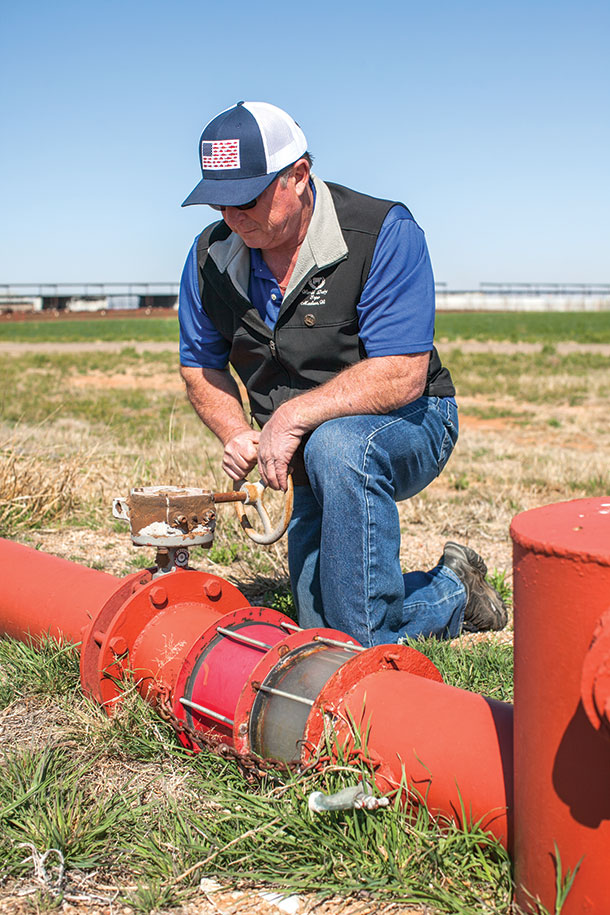 “I asked the New Mexico Food and Drug Administration to come and check my milk,” Schaap explains. They found it to be more than twice the level recommended by the federal regulatory agency.

“The day they tested the milk was the day I started dumping my milk,” Schaap says. “I did not want to have any liability for having this in my milk.” That was nearly six months ago, and Schaap has been dumping his milk ever since.

“I’ll never forget the day he told me he was going to have to start dumping the milk,” Renee recalls. “To see him work his entire life, and to think that we possibly could lose everything. That was the hardest part for me … to see him think it could all be down the drain.”

Art and Renee quickly realized they also needed to be tested. “We figured the cows needed to be tested, and that was a heartbreak when we found the cows had it in them,” she describes. “We just automatically assumed that since we were drinking the same water, we would have something in our blood also.”

Sadly, they were right.

“Art was worse than I was because while he was drinking well water from a filtered system, it didn’t filter out the PFAS,” Renee explains. The filtered water had bothered Renee’s stomach, so she had already switched to drinking bottled water years earlier. “That’s why his blood levels were so much higher than mine.” Still, Renee had cooked with well water for years.

While scientific studies are not definitive, research has identified probable complications from PFAS poisoning to be various cancers, ulcerative colitis, thyroid disease and reproductive concerns including altered hormone levels and the inability to conceive.

“I like to think of myself as an optimistic person,” Renee says. “The doctor told us we would eventually excrete it out of our bodies, but there are no studies to see how long it takes to get it out of the system.” The Schaaps will re-test themselves in a year.

None of their neighbors have tested positive for PFAS in their wells yet. But the contamination plume is moving toward the wells that provide drinking water for the city of Clovis. With advance notice, expensive filters can eliminate the chemical from water.

Day-to-day management while under quarantine

“As soon as we found out we had PFAS in our water, we didn’t want to infect any more animals, so we quit raising calves,” Schaap says. “That’s one way we were able to reduce employees.” Since then, the farm has sold all calves at a day old. 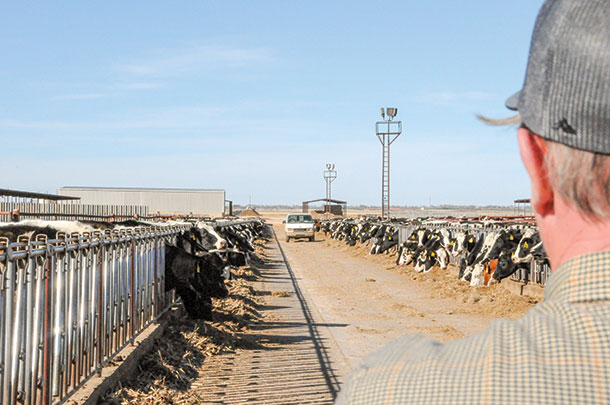 Once Schaap started dumping his milk, he began trying to cull from his remaining herd. “I called my cow broker and asked him to sell some cows,” Schaap explains. “He contacted the packing houses, and they declined to take my animals.”

That’s how the dairyman learned he could no longer sell animals for beef.

“The FSIS put an ABP (all points bulletin) out on my dairy and my animals,” Schaap says. “Packing houses were notified they would be buying adulterated beef.”

When local media began reporting the story in 2019, headlines read “4,000 Cows to be Euthanized.” Schaap believed it was his only option.

“The animals are living, eating and breathing,” he explains. “I can’t sell the milk. I can’t sell the beef. The only thing they are good for is what? I gotta euthanize them.”

Still, he holds out hope his herd can be saved.

“We’re trying to find fresh water so PFAS will slowly clean out of their bodies.” But Schaap’s remaining clean wells are not keeping up with production to water all the cows. And the Air Force is unwilling to help address this part of the crisis.

“We asked the air base to supply water to our cows, and they said they would supply water for domestic use only and did not have funds for animals’ water,” Schaap says. “Our grade A dairy permit for milk sales specifically says our water must be drinkable and contaminant-free.”

“The Air Force has previously said it has done what it can to mitigate the impacts on human consumption, but that it lacks the authority to take any action on behalf of livestock or agriculture,” confirmed Kevin Wilson, editor of The Eastern New Mexico News.

Schaap dries off his cows still in production as soon as possible and has stopped breeding animals. He’s also trying to identify alternative crops to plant for this year. “We also tested our feed and found traces of the PFAS poison in our homegrown feed supply. About 50 percent of our land has PFAS water. So we’re trying to figure out what crops we’re going to grow in the future that won’t be an edible product.”

On Feb. 28, FSIS finally contacted him directly. The plan is to send 30 head of cattle for independent testing to determine how long it takes for PFAS to leave their bodies. Meat samples will also be tested. FSIS will blood test 200 additional random animals on the farm from different age groups.

While waiting, Schaap has been receiving emergency loan dollars from the Dairy Indemnity Payment Program (DIPP), a USDA Farm Service Agency fund. DIPP is compensating for 75 percent of lost milk income, but the funds will have to be repaid when damages are settled. Schaap’s lawyers have filed suits against both the Air Force and the manufacturers of PFAS.

He is also exploring coverage for eventual animal loss through the Livestock Indemnity Program (LIP) administered by the same agency. LIP payments are equal to 75 percent of the average fair market value of the livestock. Disaster assistance outlined in the December 2018 version of LIP Payment Rates compensates $1,216.88 for adult dairy cows. Non-adults range from $304.22 to $982.86 depending on weight.

When asked if he’s been able to consider the total economic impact of the PFAS contamination, Art Schaap crosses his arms and sits silently for a long time. Finally, he responds.

“It’s in our water, and it’s in our land,” he answers quietly. “I worked my whole life for this dairy. I’ve been on this farm for 27 years. At this moment, it’s worth zero. For farmers, our investment is in our land and our cows. This is our 401K. This is me and my wife’s retirement fund,” implores the 54-year-old dairyman. “As far as I’m concerned, that PFAS water has cost me my retirement.”

Regardless, Schaap continues to work hard every day to care for his family, his cows, his land and his community.

PHOTO 3: Art Schaap’s Highland Dairy near Clovis, New Mexico, sits adjacent to Canon Air Force Base. Contamination from chemicals in fire-fighting foams used on the base have been found in Schaap’s groundwater wells, which supply drinking water for his family and dairy cows and irrigate his crops. Photo by Karena Elliott.

Karena Elliott is an international freelance writer who specializes in the agriculture industry. She makes her home in Amarillo, Texas.

MILC Group is a California-based company that brings innovation to the dairy industry through cloud technology.