Weekly Digest II: Stop dairying in early 2018? You may be eligible for partial MPP-Dairy payments

Stop dairying in early 2018? You may be eligible for partial MPP-Dairy payments

The USDA’s Farm Service Agency (FSA) will hold a limited sign-up period for dairy farmers who ceased operations in early 2018, prior to implementation of Margin Protection Program for Dairy (MPP-Dairy) revisions. The sign-up period will runs through May 10, 2019.

The Bipartisan Budget Act of 2018, signed into law on Feb. 9, 2018, made substantial revisions to MPP-Dairy. An enrollment period was conducted from April 9-June 22, 2018. However, at the time, dairy operations that were commercially marketing milk in 2018 – but stopped marketing milk before or during the re-enrollment period – were determined to be ineligible for coverage.

Prior to the close of the 2018 re-enrollment period, MPP-Dairy indemnity payments were issued from February-June 2018 (Table 1). 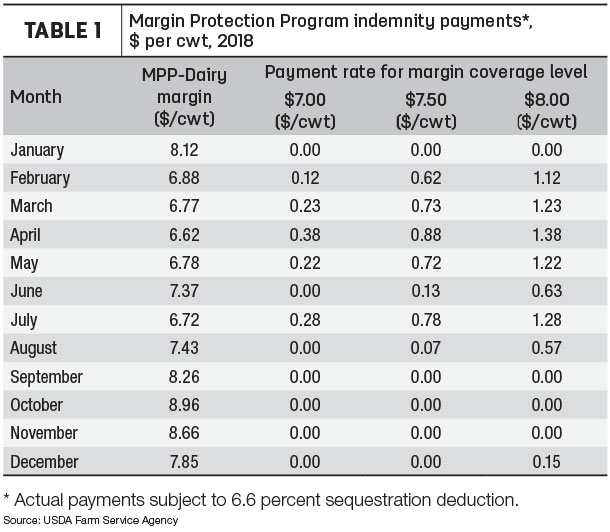 If an MPP-Dairy contract succession took place before or during the 2018 MPP-Dairy sign-up period, and the contract predecessor could not sign up because the enrollment period had not opened, the predecessor dairy operation can now sign up for the months they commercially produced milk in 2018.

It will be up to county and state FSA officials to track down former dairy producers who may be eligible for the payments. For example, according to the Wisconsin Department of Agriculture, Trade and Consumer Protection, 338 dairy farms ceased operations between January-June 2018. The USDA’s annual statistics estimated the number of licensed dairies declined by 2,731 in 2018, but doesn’t designate when those dairies stopped marketing milk.

Eligible producers must visit their USDA county office to sign up for coverage. Dairy operations can only sign up for the months they were marketing milk in 2018. Therefore, premiums for buy-up coverage will be adjusted accordingly.

Eligible dairy operations must provide all of the following:

In an update related to another retroactive MPP-Dairy program payment, Progressive Dairyman heard from a dairy farmer – originally prohibited from MPP-dairy due to his participation in the Livestock Gross Margin for Dairy (LGM-Dairy) – who received his 2018 indemnity payment within a week of signing up at the county USDA FSA office.

A reminder: Dairy farmers who participated in the 2018 LGM-Dairy program can retroactively sign up for the 2018 MPP-Dairy payment, through May 10. Those producers were originally blocked from participating in MPP-Dairy under USDA rules prohibiting participation in both programs.

Eligible producers should have received a postcard with details from FSA. They must visit their county FSA office to sign up and make a coverage election for retroactive 2018 MPP-Dairy payments. In some cases, producers may need to establish a milk production history to calculate indemnity payments.

There is a $100 administrative fee, and premiums must be paid at the time of enrollment, or an assignment can be created to collect the premiums once the indemnity is paid. All payments are subject to a 6.6 percent sequestration deduction.

Fairlife LLC will build a $200 million production and distribution facility in a suburb of Phoenix, Arizona. Plant operation is scheduled for the second half of 2020, and fairlife is working with United Dairymen of Arizona (UDA) to source milk from area dairy farmers.

The site is located in the west valley of Phoenix, at Goodyear. The new plant will enable increased production of all fairlife products, including the different varieties of fairlife ultrafiltered milk, Core Power, fairlife YUP!, fairlife smart snacks and fairlife nutrition plan.

Fairlife currently produces multiple varieties of dairy-based beverages at a production plant in Coopersville, Michigan, with distribution throughout the U.S. and Canada. Last June, Coca-Cola Canada and fairlife LLC announced plans to build a production facility in Peterborough, Ontario, with plans to start operations in the first quarter of 2020.

California’s beef and dairy producers have approved operation of the California Cattle Council, funded by a mandatory $1-per-head checkoff on sales of beef and dairy cattle.

The California Cattle Council will provide more resources to defend and promote live cattle production in the state, according to Lucas Deniz, president of the Western United Dairymen (WUD), which led the effort to create the council. The council will perform research aimed at the development of best management practices to improve sustainability and efficiency of California’s beef industry, assist with regulatory compliance and develop consumer education programs.

CDFA is accepting board of director nominations through May 22. The CDFA secretary will appoint 11 members to the council’s board, including three dairy producers, three cattle ranchers, three cattle feeders, one processor and one public member. Day-to-day operations will be administered by a hired or contracted staff.

Producers may submit claims for assessment refunds. CDFA will conduct a public hearing every five years to take comment on whether the California Cattle Council should continue.

The Pennsylvania Milk Marketing Board (PMMB) will hold a public hearing, May 1, to take comments on a petition requiring cooperatives to add a line item on dairy farmer milk checks that identifies the amount the Pennsylvania over-order premium adds to the payment. In a letter to PMMB, state Rep. John Lawrence said there were currently no obligations for milk buyers to provide that information.

Earlier this year, the PMMB increased the state’s over-order premium to $1 per hundredweight (cwt), effective April 1-Sept. 30, 2019. The over-order premium applies to all Class I milk produced, processed and sold in Pennsylvania.

Background information and hearing details can be found on the PMMB website. (Click on “May 1, 2019: Amendment to 7 Pa Code ch. 143; over-order premium line item on cooperative pay statements.”)

In March, Dairy Farmers of America requested pool handlers be allowed to temporarily dispose of surplus milk during the period, citing year-over-year milk production increases in New York and Vermont, as well as seasonal increases related to the spring flush that are already stretching processing and marketing capacity. Land O’Lakes Inc. and St. Albans Cooperative Creamery submitted remarks in support of the request. Agri-Mark, Maryland and Virginia Milk Producers Cooperative Association, and Upstate Niagara Cooperative did not oppose the request or indicated a neutral position.

There have been multiple requests to authorize temporary pooling of dumped milk over the past several years in the Northeast FMMO. For calendar year 2018, milk volumes reported in the Northeast marketing area’s monthly statistical reports under “Class IV Minimum Price Class” (often referred to as dumped milk) totaled nearly 184 million pounds, up from 170 million pounds in 2017. The total represents milk delivered to a plant, processed to some extent and then discarded for any reason.

A joint venture biodigester project in Washington’s Yakima County will convert manure from up to 7,000 cows into renewable natural gas (RNG), according to a press release from Brightmark Energy, a San Francisco-based waste and energy development company.

The project is the collaboration of Brightmark, Augean Renewable Natural Gas, Promus Energy and DeRuyter Dairies. It will convert 150,000 gallons of dairy waste per day into renewable natural gas (RNG) and other products.

The Augean project will collect biogas from DeRuyter’s anaerobic digester: cleaning, upgrading and compressing it into pipeline quality RNG. It will then be transported through a new pipeline system and injected into the nearby Williams NW regional gas transmission line for sale as vehicle fuel.

Augean and Yakima County will construct the new natural gas pipeline infrastructure, which will be accessible to other dairies in the area.

Other renewable products generated by the process include biofertilizer, digested dairy fiber for use as cow bedding or as a peat moss substitute, and reclaimed irrigation water.

The biogas project is also supported by a $1.4 million grant from Yakima County and a $500,000 USDA Rural Energy for American Program (REAP) grant.

Since 2010, more than $500 million has been invested into over 1 million square feet of dairy production facilities at the Genesee Valley Agri-Business Park and Buffalo East Tech Park. Genesee County’s dairy, food and beverage industries increased employment by 29 percent from 2014 to 2018.

USDA Census of Agriculture set for release on April 11

The USDA’s National Agricultural Statistics Service (NASS) will release the 2017 Census of Agriculture results on April 11.

The full census report will include millions of data points, including number of farms, land in farms, total value of production, demographics and more at the national, state, and county levels.

The report, along with a number of related publications, video presentations and searchable data query interfaces, will be available on the NASS website.