The annual product price forecast for cheese was raised from last month based on higher current prices and expected stronger demand. However, projected prices for butter, nonfat dry milk and whey were reduced.

Looking at the WASDE report’s beef and feed situation and forecast:

• Beef cattle: The 2019 beef production forecast was reduced on lower carcass weights offsetting increased slaughter. The 2019 cattle price forecast was narrowed in a range of $117 to $122 per cwt, with strongest prices in the first half of the year.

• Corn: This month’s 2018-19 U.S. corn outlook is for lower feed and residual use, reductions in corn used for ethanol and exports, and larger stocks. The projected 2018-19 season-average corn price received by producers was narrowed, with the midpoint unchanged to $3.55 per bushel. That would be up from $3.36 per bushel in 2017-18.

The latest RaboResearch Dairy Quarterly report also sees limited growth in U.S. milk production in 2019. However, when combined with pressures on domestic demand (higher prices, lackluster retails sales in some categories) and geopolitical conditions (trade wars and tariffs), U.S. producers may miss out on the full upside in 2019 global dairy prices.

There are reasons for optimism:

There are, however, clouds on the horizon.

CoBank: Dairy outlook better for second half of 2019

Stabilizing dairy supplies could lead to improving markets in the second half of 2019, according to the latest quarterly economic outlook from CoBank. Nonetheless, U.S. agriculture will face challenges in 2019 as slowing domestic and global economic growth rates, trade talks continue and weather casts uncertainty in the short- and long-term markets.

If tariffs and trade disruptions are resolved and exports improve, there is optimism that the second half of the year could show some improvement. The net result should be prices about $1 to $1.50 per cwt higher in 2019 than they were in 2018. 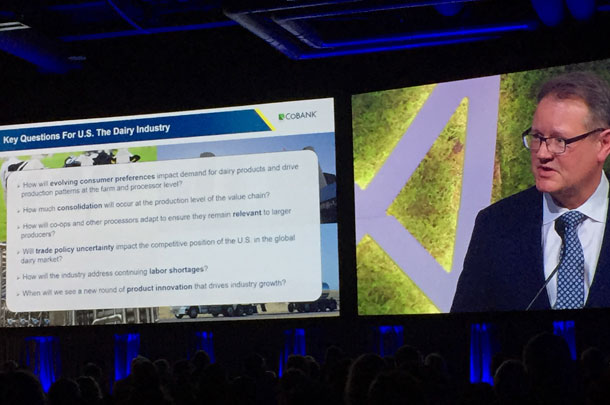 1. How will evolving consumer preferences impact demand for dairy products and drive production patterns at the farm and processor level?

2. How much consolidation will occur at the production levels of the value chain?

3. As farm size increases, how will co-ops and other processors adapt to ensure they remain relevant to their members, their customers and their partners?

4. Will trade policy uncertainty impact the competitive position of the U.S. in the global market?

5. How will the industry address the persistent problems of labor shortage and, if automation is a solution, what impact will that have on farm operations and the economics of dairy farming?

6. When will we see a new round of product innovation that drives future industry growth?