Weekly Digest: Social Security ‘no-match’ letters: What should you do?

Social Security ‘no-match’ letters: What should you do?

In guidance provided to dairy producers in a “client alert” by Kelly Fortier, an immigration attorney with Michael Best, employers should not ignore the requests, but don’t immediately take an adverse action against the employee either.

“Failure to take action on the requests could serve as evidence of constructive knowledge of unauthorized employment under immigration rules,” she warned.

SSA first began issuing no-match letters in 1993 but discontinued the practice in 2012. Late last year, the agency announced it would resume sending notices in spring of 2019. Progressive Dairyman has heard from dairy organization leaders in multiple states who say their producer members are receiving the letters.

According to Fortier, the 2019 version of the no-match letter instructs employers to access a list of their affected employees by logging into SSA’s Business Services Online system. She urges all employers to access the information immediately upon receiving the Employer Correction Request.

After accessing the list of affected employees, employers should check their records for typos or other discrepancies in the company’s records. If none are found, notify the employee of the request and instruct the employee to contact the SSA to correct the issue.

Employers should consult with an attorney regarding the format of the communication, timeline and other protocol for ensuring proper response to the SSA without violation of discrimination laws.

Employers should not take adverse action against an employee based on the no-match letter alone. The Employer Correction Request Notice clearly warns against such action, stating:

“You should not use this letter to take any adverse action against an employee, such as laying off, suspending, firing or discriminating against that individual just because his or her SSN or name does not match our records. Any of those actions could, in fact, violate state or federal law and subject you to legal consequences.”

There are many reasons why reported names and Social Security numbers may not match SSA records, including reporting errors by an employer or employee, errors in hyphenated or multiple last names, or unreported name changes, Fortier said.

The estimate of U.S. dairy cows located in “drought areas” continued to shrink, according to the USDA’s World Agricultural Outlook Board. Just 1 percent of the nation’s milk cows were located in areas experiencing drought at the start of April (see Figure 1). Thanks to March precipitation, areas of drought disappeared in California, and declined in Colorado, Oregon, the Texas Panhandle and Utah. 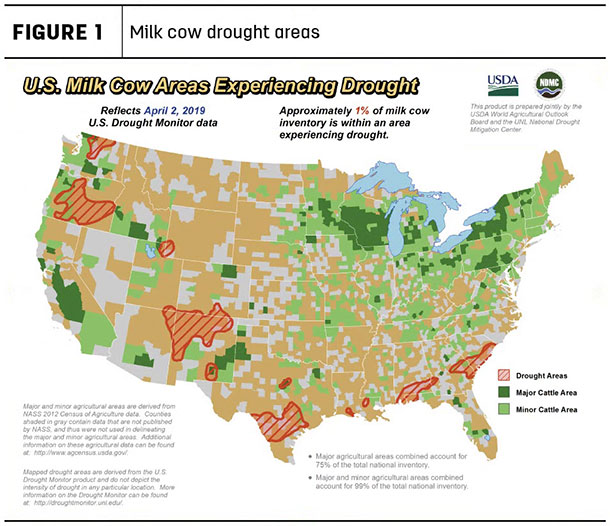 A USDA summary verifies what you knew all along: 2018 “mailbox” milk prices were four-year lows in almost all reporting areas in all FMMO areas.

The mailbox price approximates the net price received by dairy farmers for milk after adding any premiums and deducting costs associated with hauling and marketing.

With the changeover from a state milk marketing order to a FMMO, California mailbox prices were not available from November-December 2018.

Midwest Dairy is asking the public to vote for one of three new ice cream concoctions to add to its 2019 Minnesota State Fair Dairy Goodness Bar menu. The three candidates in the "Flavor of the Fair" contest are:

Ice cream lovers can visit the Midwest Dairy website to take the Flavor of the Fair poll and choose a favorite. Voting is open through April 12. This year’s state fair runs from Aug. 22 through Sept. 2, 2019.

The Hawaii Department of Health (DOH) entered into an administrative consent order with Big Island Dairy LLC, March 28, requiring the dairy’s owners to terminate their dairy operations, remove all cows from confinement on the site, and clean and remove the existing wastewater system by June 2019. The dairy must also pay $79,000, either as an administrative penalty or to fund an environmentally beneficial project in the area.

"Entry into the [administrative consent order] ensures that the closing of the dairy is being conducted in an expeditious and responsible manner," said Keith Kawaoka, DOH deputy director of environmental health.

Earlier this year, Big Island Dairy settled a lawsuit filed in 2017 by nonprofit organizations Kupale Ookala and the Center for Food Safety, alleging the dairy was guilty of violating the federal Clean Water Act.

In addition to site cleanup, the settlement required the incremental removal of about 2,700 mature cows and 2,975 youngstock, according to court documents.

The USDA launched a new feature to help farmers manage their farm loans via a mobile-friendly, authenticated-portal website.

To access their information, producers will need a “USDA eAuth” account. Google Chrome, Mozilla Firefox or Microsoft Edge are the recommended browsers to access the feature.

Central Valley Regional Water Quality Control Board are contacting about 70 dairies to investigate whether their manure retention ponds are in direct contact with groundwater. Some dairies have already reported receiving the letters, which order them to submit technical reports to help determine whether their ponds intersect the water table, according to Kevin Abernathy, general manager of California’s Milk Producers Council (MPC).

According to the latest MPC newsletter, officials said the effort is focused in an area of the northern San Joaquin Valley known for historically shallow water tables, near communities of Hilmar, Turlock and Merced. The targeted area appears to include parts of Stanislaus, Merced and San Joaquin counties.

Initial reports indicate the dairies are being given until July 31 to respond to their request for information determining whether the dairy’s pond intersects. The letters require affected dairies to have a licensed civil engineer or land surveyor prepare a “Groundwater Separation Study,” which would include the elevation of the land surface near the lagoon, the lowest part of the top embankment, depth of groundwater below ground surface, “highest anticipated groundwater,” and a comparison of the elevation of the bottom of the lagoon to highest anticipated groundwater.

If the ponds intersect groundwater or highest anticipated groundwater, the dairies are being ask to respond by Oct. 31 with a “remedial workplan,” including a time schedule for “elimination of the threats to groundwater associated with this condition.”

“Between the low milk prices, nonexistent margins and the unusually wet weather, the challenges dairy farmers have faced in 2018 really took a toll on our region,” said Maryland & Virginia co-op President Matt Hoff, a dairy farmer from New Windsor, Maryland.

Hoff forecast better financial conditions in the year ahead.

“The tide is turning for our member and the cooperative,” he said. “Markets are starting to firm up, and the milk price outlook is more optimistic than it was a year ago. Maryland & Virginia has continued the positive momentum of being our own largest customer for the second year in a row, and we’re running more of our member milk through our own plants.”

CEO Jay Bryant said the co-op made key investments into its facilities in 2018, and that the co-op’s fluid milk volumes had increased – due to the acquisition of new customers and growth among existing key customers – even though fluid milk sales were down nationally.

Jon Cowell was introduced as the co-op’s new chief financial officer, and Lindsay Reames will serve as director of sustainability and external relations.

Two farm families were recognized as “Producers of the Year” during member recognition luncheons held in Hickory, North Carolina, and York, Pennsylvania.

Producer of the Year for FMMOs 1 and 33 was Red Sunset Farm, Dave and Marie Graybill of Mifflintown, Pennsylvania. John and Paula Steel, Steam Valley Farms of Dover, Ohio, was recognized as a finalist for the award.

Producer of the Year for FMMOs 5 and 7 was Winding River Farms, Wes Kent of Weyers Cave, Virginia. The Phillips family, North Point Farm, Waynesboro, Virginia, was recognized as a finalist for the award.