Cost comparison of robots to parlors

Kelli Boylen
Robotics have been around for a while, but are they a good investment? Iowa State University Extension Dairy Specialist Larry Tranel has a two-word answer for that question: It depends.
Kelli Boylen

Tranel has been studying the economics of automated milking systems (AMS) since before they first came to Iowa almost a decade ago. He started running numbers when the first farmer in the state was exploring robotics.

“Since robotics first came to Iowa, we have learned a lot about how to get the most milk out of each robotic unit and cow psychology of how cows respond to robotic milking; what metrics need to be looked at to improve cow performance per robot, even more so than per cow. Who would have thought we could get more milk per robot at times with fewer cows?” he says.

When calculating if an AMS would make an operation more profitable, Tranel says it all depends on what you are comparing it to. Robots pan out better compared to low-efficiency, high-cost parlors, but not as well as high-efficiency, low-cost parlors.

“There are two very important things to note when comparing AMS versus conventional parlor milking,” Tranel says. “First, many factors are ‘highly variable,’ meaning that slight changes in milk price or projected change in milk production, for instance, can significantly change the financial impact. Second, there is a wide variation in results from producers implementing AMS in terms of milk production and other responses.”

Over his nearly 10 years of looking at robotics, Tranel says labor efficiency is still pretty key, whether in parlor systems or robotic milking systems. Milk per AMS seems to be very highly correlated to AMS profitability. “Cash flow of a robot tends to be very negative in the first seven years, then pretty positive for rest of the life of the AMS, but that is dependent on many variables, especially repair costs across the whole life of the robot.”

“Often, much of the increase reported on AMS is due to the new cow housing facility, not just the AMS, as new facilities often increase production 6 to 8 percent over old, worn-out facilities. This is an important point often overlooked,” he says.

Somatic cell count (SCC) tends to increase in the first few months after startup with robotics, but numbers tend to drop to initial levels or even 20 percent lower after the adoption period. Fat and protein tend to increase a bit, and all of these factors can have a huge impact on whether an AMS is the right choice for your farm.

Tranel recommends looking at what he calls the “DIRTI five” when making any investment decisions on your operation.

DIRTI stands for depreciation, interest, repairs, taxes and insurance, and it can be used to calculate how much you pay to milk your cows. 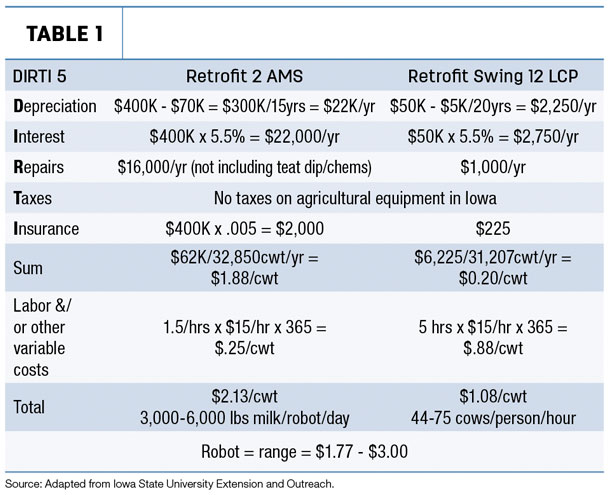 “The higher the milk price, the better the investment in AMS is,” he says. “But AMS is definitely as good as a high-priced milking parlor. Bottom line is it mostly depends on the system it is being compared to.” For example, he adds, a low-efficiency current milking system (less than 35 cows milked per person per hour) tends to look much worse than a high-efficiency AMS (5,000 pounds of milk sold per day per AMS). In contrast, a low-efficiency AMS (less than 3,500 pounds of milk per day per AMS) will look much worse than a high-efficiency parlor (more than 70 cows per person per hour).

All financials aside, Tranel says labor is still the number one reason dairy producers are choosing to go with robotics.

“Profit wise, a good low-cost, high-efficiency milking parlor can still milk cows for less than 1 dollar per hundredweight, while robots tend to be at least double that. But, as labor costs and availability become bigger issues, AMS can be a good fit on many dairy farms,” he says.

All of those with robots who have continued to dairy (several who installed robotics sold their herds and they were not surveyed) agreed that robotics have been a good financial investment with improved cow health, increased production and labor efficiency. These producers say robots have been a good personal investment and good management investment.

Tranel notes the longevity of an operation is an important consideration when looking at robotics. “If you will be farming for at least another 13 to 17 years, that increases the propensity to put in robotics, but if you are only planning on farming about seven years, then it might not make sense.” He adds, if you plan on dairy farming for another 20 years, you need to consider needing to make a second investment of money in 15 years when the equipment wears out.

The AMS, when balanced with quality of life concerns and other positive financial assumptions due to the herd management software, can be a good investment. However, depending on labor, cost of capital and debt structure, AMS may result in negative cash flow.

“Our 2017 survey showed producers were spending approximately $250,000 per robot to install, including the housing around the robot but not including any cattle housing,” Tranel says. “The tighter cash flows due to current lower milk prices inhibit lenders from lending money or producers for having the cash flow to borrow the money.”

To calculate the potential economics of robotics for your farm, go to the Iowa State University Extension and outreach website and click on “Economics of Robotic Milking Systems (Working EXCEL Spreadsheet) by Kristen Schulte and Larry Tranel,” or download the spreadsheet here.

Kelli Boylen is a freelance writer based in northeast Iowa.