In my previous article featured in the February issue, I mentioned there are two types of mold growth that can affect our silages – field molds and storage molds.

A second mode of entry can be due to physical damage to the outside layer of the kernel. This can be caused by birds or insects. Last, molds may gain entrance into the forage portion of plants from physical damage to plant tissue from hail and insects.

Let’s focus on field molds that affect the ear of the corn. The most common ear molds are gibberella ear rot, fusarium ear rot and smut.

Gibberella ear rot is the most common field mold diagnosed in Ontario and is caused by the mold Gibberella zeae. It can overwinter in infected crop residue and spread from the residue to corn ears by wind and rain splash.

The infection of corn ears occurs through young silks. When the silk channels are open for pollination, it allows entry of the infection.

You can have a high infection rate at silking, but if there is not an optimum environment, limited mold growth will occur – and vice versa. In our climate, we tend to see a significant gibberella growth during the fall, especially during cool nights, foggy mornings and warm days. Excessive condensation on the plant during morning hours is an ideal environment for gibberella ear rot.

It is most readily identified by the red and pink colour of the mold starting at ear tip and progressing down the ear as shown in Figure 1. 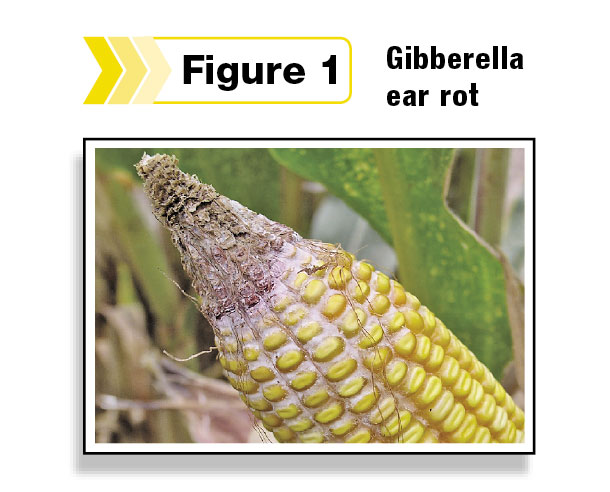 It consumes grain dry matter, which reduces overall grain and corn silage yields; remember, 60 percent of the energy in silage comes from the grain. If harvesting the corn for dry corn, the test weight can be lower.

Gibberella ear rot sometimes produces mycotoxins, but it must undergo stress to produce them. The three mycotoxins produced are deoxynivalenol (DON), zearalenone and T2.

They are populated in this order; generally, the highest toxin load will be DON and the lowest T2. You cannot have T2 present unless you have DON or zearalenone present in the sample.

DON, commonly referred to as vomitoxin, is the most often detected mycotoxin. A University of Vermont study found the levels of DON were significantly higher in the cob (19 to 21 ppm) compared to corn grain (2 to 3 ppm) levels. There is an association with reduced feed intake and lower milk production with this toxin if levels are between 1.5 and 2.5 ppm.

DON may simply be a marker for the presence of other mycotoxins in problem feeds, as some research indicates DON by itself is degraded by rumen bacteria to an end product that’s not harmful to cattle.

However, rumen health events may exist that would impede rumen microbe activity, thus permitting passage of DON out of the rumen and into the intestines, where it’s absorbed into the bloodstream.

Zearalenone is a toxin that mimics estrogen. Dairy cows are able to ruminally degrade zearalenone into two end products. One is less toxic to dairy cattle, while the other is more toxic than zearalenone consumed by the cow. Zearalenone levels greater than 5 ppm may cause cattle infertility and reproductive disorders.

T2 is usually found in the lowest concentration of all gibberella-produced toxins. If levels exceed 0.5 ppm feed refusals, lower milk production, intestinal hemorrhages and diarrhea, along with immunosuppression in dairy animals, may occur.

A grower cannot completely prevent gibberella ear rot from affecting his crop, but there are several things to do that will help reduce the risk. Research in Ontario has shown the use of a triazole fungicide at tasseling can reduce gibberella-produced mycotoxins by 50 percent.

The same research has shown an average increase in corn yield of 8 bushels per acre. Many factors need to go into making the decision to apply a fungicide, including grain price, fungicide and application prices, weather conditions, field conditions and history, and the hybrid grown.

Some corn breeders have progressively improved hybrids by selecting for genetic tolerance in environments where this disease occurs at high levels. They have selected against husk tightness and ears that remain upright after maturity, and selected for hybrids with fast ear drydown.

If gibberella is of concern, selecting a variety with a high gibberella tolerance is a must. Since residue is a host for the mold spores, tillage can help reduce the level of spores present. It is also highly recommended to avoid corn-on-corn situations where gibberella is an issue.

As a general rule, harvest infected fields early. Mycotoxin levels have the potential to build up the longer you leave the corn in the field. It is not until the corn grain moisture is below 15 percent when the mold becomes dormant and ceases to produce mycotoxins. Following these suggestions will reduce the potential for mold and mycotoxin growth.

Fusarium ear rot is the most common mold in corn grain; it is caused by Fusarium verticillioides. It survives on residue of corn and other plants, especially grasses. It enters the ear primarily through wounds from hail or insect feeding.

The severity of the ear rot is usually related to severity of feeding damage. If mold growth is seen with no visual physical damage to the husk or cob, it is possible that airborne spores germinated and grew down the silk channel to begin growth propagation inside the husk.

Fusarium ear rot is most severe when weather is warm and dry. Typically, the mold growth is white, pink or salmon-coloured, and the infected kernels may turn tan or brown.

A “starburst” pattern is often associated with the disease, with light-coloured streaks radiating from the top of kernels where silks were attached, as seen in Figure 2. 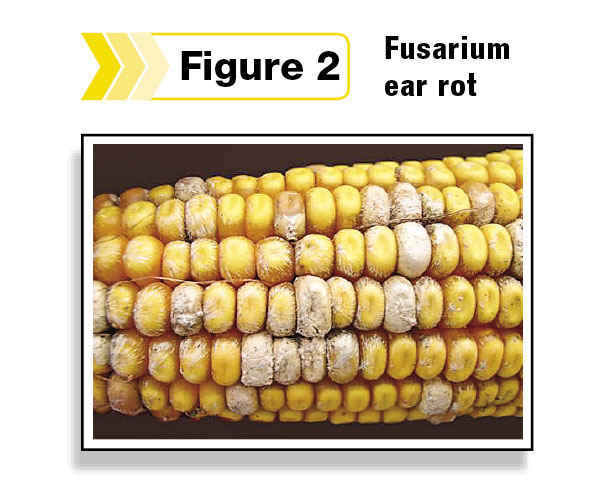 Yield and grain quality are reduced and, in severe infections, ears may be completely consumed by the fungus, leaving lightweight husks cemented to the kernels.

Fusarium ear rot can produce the mycotoxin called fumonisin; however, this toxin is more commonly found in the southern U.S. Usually, levels in feeds exist at the 1 to 10 ppm range. If levels exceed 50 ppm in cattle diets, it may result in feed refusals, respiratory symptoms and liver damage.

To decrease the likelihood of fusarium ear rot, select hybrids that have resistance to this mold. If it has caused significant damage in the past, growers should consider planting only hybrids with a fusarium ear rot rating of 5 or higher. Hybrids with built-in insect protection may have lower levels of occurrence.

Iowa State University research shows Bacillus thuringiensis biotechnology that minimizes damage from European corn borer has been found to produce a lower incidence of mycotoxins. Crop rotation and tillage to break down crop residue is helpful.

Common smut and head smut is caused by the fungus Ustilago maydis, which attacks the leaves, stalk or ear. Ear infections are the most common. Luckily, there are no known toxins associated with various types of smut. 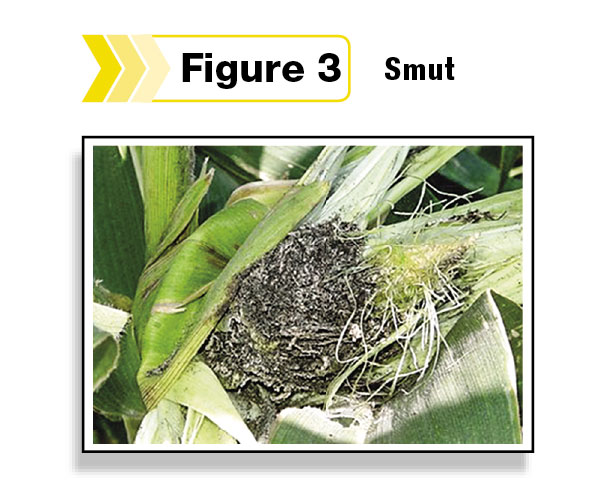 It is also generally known as one of the dry-season diseases. Optimum growing temperatures are 26ºC to 34ºC. It is very common to see the disease develop when grown in soils with high nitrogen levels, particularly following manure applications.

Maintaining well-balanced soil fertility is a major control measure. Smut can also be controlled by genetics, although all corn is generally considered susceptible. Fungicide seed treatment options are available.

One cannot solely rely on visual appearance of mold in the field to predict mycotoxin levels. Visibly high mold may have low mycotoxin levels – and vice versa. Again, molds must undergo stress to produce mycotoxin.

Separate mycotoxin analyses must be performed to determine if they are present or not. The most common testing method for testing mycotoxins in grain is called the ELISA test.

If you are testing corn silage, the ELISA test is not preferred, as it is for dry grain only and not meant for forage; false positives are common. For forages, chromatography is the preferred testing method; it is more expensive but results are more accurate. Visit with forage laboratory managers to determine if they use chromatography methods for mycotoxin testing in forages.

All field molds (ear rots in particular) affect quality and yield of the corn plant, and in some cases can produce harmful mycotoxins.

Although the environment plays the largest role in occurrence and severity of the mold’s activity, there are certain things a grower can do to limit the impact: Plant and harvest early, hybrid selection, tillage, good rotation, optimize soil fertility and maintain plant health (fungicide is an option).

All of these methods can help to lower field mold activity in the crop and therefore lower the chances of mycotoxin production.  PD