In the beef industry, use of heterosis to improve production has shown similar advantages. Numerous research studies have reported up to a 25 percent improvement in pounds of calf weaned per cow exposed when crossbred dams produce crossbred calves. There are three main types of heterosis:

Maternal heterosis – the combined improvement in traits from the dam that cause increases in the performance of her and of her progeny. Examples of maternal (female) heterosis in a beef cow include: younger age at puberty, increased calving rate, increased survival of her calf to weaning, longevity, and pounds of calf produced in her lifetime.

Paternal heterosis – the improvement in productive and reproductive characteristics of the bull. Examples of paternal (male) heterosis include: reduced age at puberty, improvements in scrotal circumference, improved sperm concentration, increased pregnancy rate and weaning rate when mated to cows. 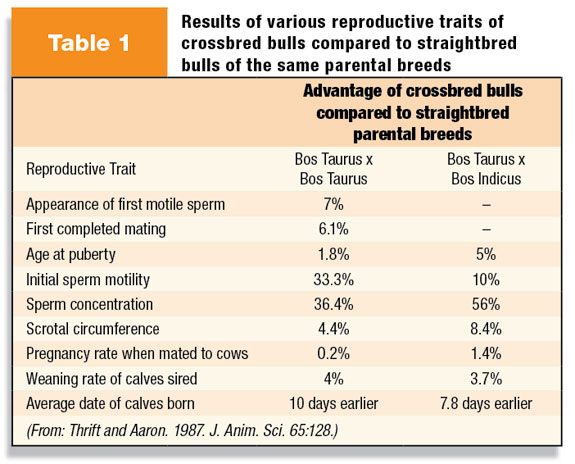 Paternal heterosis of bull reprodutive traits
In 1987 researchers in Kentucky published a summary of research using crossbred sires in the Journal of Animal Science. This article lists some of the advantages from paternal heterosis. The authors reviewed and synthesized nine published reports that dealt with the productivity of crossbred bulls for commercial beef production. This review focused primarily on reproductive traits of yearling crossbred and straightbred bulls and included results from both Bos Taurus x Bos Taurus matings and Bos Taurus x Bos Indicus crosses. The conclusions of this review are summarized in Table 1.

These data illustrate a significant improvement in semen characteristics of crossbred bulls, whether Bos Taurus or Bos Indicus crosses. However, pregnancy rates produced by crossbred sires were only slightly improved. This may be due to the fact that according to most reproductive physiologists, fertilization occurs upwards of 99 percent of the time when a viable ovum and sperm cell meet in the oviduct. There is, however, a high loss of fertilized embryos between fertilization and maternal recognition of pregnancy. This loss appears to be primarily controlled by maternal rather than paternal factors.

The reduction in average date of calves born when sired by crossbred bulls is interesting and may be the most important response shown in this research. Calves born earlier have more growing days to a set weaning date, which translates into heavier calves at weaning. When cows have upwards of eight to 10 days longer to return to estrus following calving before the next breeding season, this will also be an advantage in cow herd management.

The greater concentration of sperm cells and the improved initial motility should enhance collection, extension and freezing of semen from crossbred sires for artificial insemination. These traits would also improve the ability of young crossbred sires to successfully pass a breeding soundness examination prior to being offered for use as yearling bulls. It is my observation that both of these results are being seen in the beef industry as more hybrid and composite bulls are being used in AI.

A positive advantage of maternal heterosis in crossbred cows is the increase in longevity. For example, 22.7 percent of crossbred cows survived in the herd to 12 years of age in a crossbreeding study in Nebraska, while only 14.2 percent of straightbred cows survived to that age. This was likely due to higher fertility and a more robust composition of crossbred cows. Longevity in bulls in our modern beef production systems does not typically play a major role. This is because bulls characteristically are not retained into advanced years in order to avoid sire-daughter matings and to introduce improved genetics into the herd from younger bulls.

Beef production systems continue to evolve in North America. Perhaps as a result of early research showing the advantages of crossbreeding in the 1950s and ‘60s, there was a major period of importation of different breeds into North America in the late 1960s and early 1970s. Many, but not all of these breeds originated in the European continent and the term “Continental Cattle” was coined to distinguish these breeds from “British Breeds” originating from the British Isles and prevalent in North America at that time.

Beginning in the late 1960s, the U.S. Meat Animal Research Center (USMARC) developed a project known as the “Germ Plasm Evaluation” or GPE project, designed to characterize the numerous breeds of cattle imported into the United States. This project was followed by the “Germ Plasm Utilization” or GPU project.

Keith Gregory, the principal researcher in the USMARC Germ Plasm Utilization (GPU) project, characterized heterosis as the release of genes from dominance that accumulates in animals over many generations by narrowing the genetic diversity in geographically isolated populations. Therefore, when the accumulated inbreeding suppression is released by mating to animals with varied genetics, the release of dominance allows improvements in animal performance. In this case, the improvement in male reproductive traits of crossbred compared to straightbred bulls is shown in Table 1.

Following a trial-and-error phase of breed combining, probably driven by research coming from the GPE and GPU projects at USMARC, there began to be multi-breed bulls developed within the industry referred to as “composites.” In general, the term composite is used to describe cattle made up of more than two breeds assembled in a systematic manner outlined using principles described by the GPU project. Two important principles are: 1) sampling a wide population of sires (25 sires per breed) in the parental breeds used to assemble the composite; and 2) avoidance of inbreeding after the population is assembled.

The industry also seemed to recognize that combinations of Continental and British breeds frequently matched production systems and market signals. Several value-based programs developed that encouraged this. Within the last decade, three of the major “continental” breed associations in the U.S. have developed hybrid programs within their breed registry.