The app is designed to make pasture management easier and improve stocking rates and carrying capacity for producers. Once the app is downloaded, a producer can use images from Google Earth to create and save maps of their paddocks.

CEO and co-founder Christian Su says, “People like to see things visually, which is why we used Google Earth to visualize the data on their farms, so they can look at their herds and see the inventory the way they are used to thinking about it: on a map.” 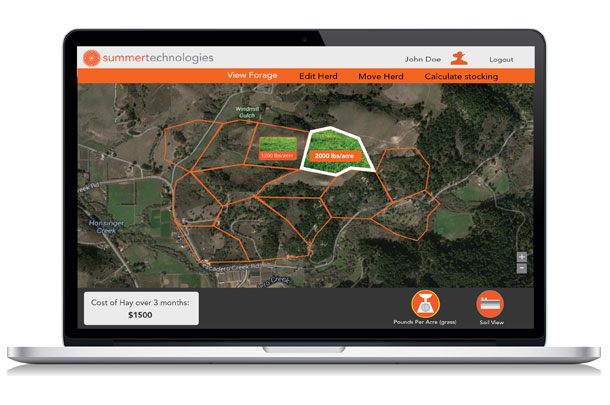 The Google Earth images are accurate enough to be used to auto calculate acreage and fence perimeter.

Paddock-specific information can be entered as well. The app allows users to take area specific or geo-tagged photos of pasture so that producers can easily check for grass height and condition of each paddock. Users can also enter notes, including pasture start height, projected end height, grazing time and grass ratings.

Over time, the app also pulls in data on rainfall and soil condition to predict future growth in the given area.

From there users can use the app to track the location of herds in each paddock as well as feed inventory. The company estimates the app can help producers save $20,000-plus on hay costs annually and six hours of labor a week due to efficient grazing planning.

Su says, “Ranchers have an enormous amount of data to juggle. They have spreadsheets tracking budgeting, planning costs for the year, weather, irrigation, the NRCS soil web and more. 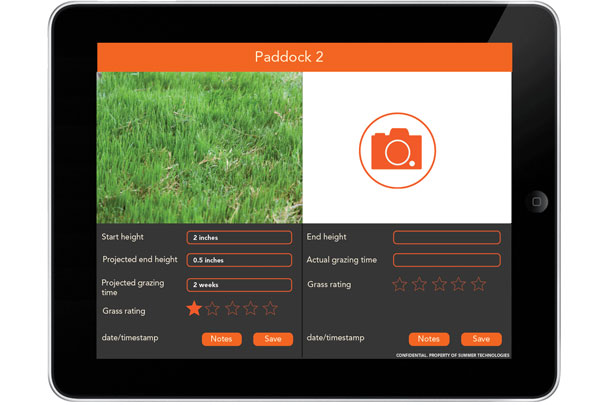 That is what Pasture Map is designed to do. It crunches numbers from the Natural Resources Conservation Service (NRCS) soil website, from Google Maps, from imaging and from the farmers’ notes, and pulls all that together into information about the feed inventory of each field in real time.

Since ranchers will be pulling in photos so they can see what’s happening on their land and pulling in rainfall and growth forecasts, the app will help them see what their grass might look like in a few weeks as well. The current and predictive data is designed to help in day-to-day management as well as to simplify more long-term planning, such as whether they will need to buy additional hay or reduce the herd before the end of the growing season.

There are currently 30 ranchers in a private data pilot across the U.S. The company will be launching Pasture Map for the iPad in late March, with a desktop version being made available later in the year. The company also plans on launching an Android version in the future.