For crop and cattle producer Jesse Monson, adding conservation practices to his family farm near Alexander, North Dakota, in the northwest corner of the state has followed a similar process. Over a decade ago, Monson worked with the Natural Resources Conservation Service (NRCS) Watford City Field Office to implement water and fencing developments for a rotational grazing system via technical assistance and cost share funding provided through an Environmental Quality Incentives Program (EQIP) contract. He then transitioned to no-till on his cropland, and over the years with additional EQIP and Conservation Stewardship Plan (CSP) contracts, Monson has incorporated tree plantings, cover crops, hayland plantings, and more fencing and water development.

“One thing led to the next,” says Monson of his array of conservation practices. The effort has helped him better manage grazing lands, boost crop productivity and utilize cover crops for fall grazing by the cow herd.

Lloyd Alveshere, a NRCS soil conservationist in the Watford City Field Office, has worked with Monson over the past nine years. He credits Monson for being holistic about his management, and says, “He’s trying to manage all of his land uses as one unit, integrating livestock in the pastures and the cropland … and making everything work together as a whole has improved the natural resources.” 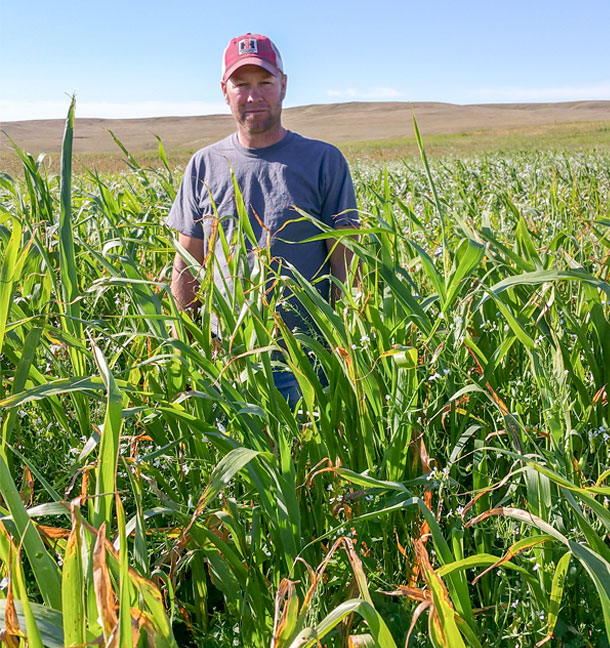 Monson returned to the family farm immediately after graduating from college – his dad passed away from cancer while he was in college. Monson farmed part-time and worked part-time in the oil industry that boomed in his county. After purchasing neighboring land about six years ago to grow the family farm, Monson has focused on full-time farming ever since. Today, the family operation includes his mom, Linda, brother, Eric, wife, Becka, and 8-year-old son, Lander, who would rather help on the farm than go to school. They run 400 to 500 commercial cows, calving in April. Crops grown include winter and spring wheat, durum, peas and lentils.

Monson recalls growing up on the farm and working the ground black. He adds, “The dirt would just blow.” He credits a no-till meeting he attended 15 years or more ago for prompting him to bring no-till into their family operation. Today, they are minimum tillage, and he says, “You don’t see erosion like you used to.”

Monson calls the addition of cover crops to their farmland “one of my favorite things we’ve done.” They plant peas, lentils, sudangrass, radishes, hairy vetch and turnips after their spring wheat and durum crops. Radishes and sweetclover are seeded with forage winter wheat, allowed to overwinter and then cut for hay.

“We do 200 to 250 acres of cover crops every year, and I’d like to do a lot more,” Monson says. He’s found it works well with fall grazing and allows longer grazing into the winter months instead of feeding hay.

Another project Monson has enjoyed is the cross fencing of pastures and water development, along with planting trees to create wind protection for cows during the winter months. Monson has gone from two pastures to 13 and nearly a half dozen tanks. Of their grazing system, he says they have more options to rotate through pastures; he can alternate where he feeds cows on pasture in the winter; and they are better able to withstand drought.

All total, Monson and his family have put the conservation pieces together for a picturesque – and profit-minded – family farm.

For producers interested in adding conservation improvements to their own operations, especially changes related to grazing management, several states now offer access to “mentor” networks. Through these programs, experienced grazing managers share their knowledge and experience with others to help encourage adaptation of management practices that are beneficial to natural resources and livestock. Find more information about available mentor networks here and here.

Kindra Gordon is a freelance writer based in South Dakota.