Or when you’re running slightly late for work in the morning but miss every red light on your way? How about that moment of euphoria when a running back from your favorite football team gets tackled right on the goal line and, after a long, mumbled discussion between referees, you see the man in the striped shirt hold his hands up to indicate a touchdown?

As we bask in these moments, there is a sense of giddiness that can’t really be explained. We let out a small grin, shrug our shoulders and say to ourselves, “It was luck.”

Thanks to Jesse and Charity Crump, owners of Crump Red Angus in Arvada, Wyoming, young aspiring cattle raisers, including 11-year-old Kade Benton from Buffalo, Wyoming, know this feeling all too well.

In February 2014, Kade attended the Crump Red Angus sale at the Buffalo Livestock Auction. Kade’s mother, Jackie Benton, worked at the sale barn and brought him along with her so he could participate in a tradition unique to Crump Red Angus – the Youth Heifer Program.

The Youth Heifer Program is a raffle conducted at the end of the Crump Red Angus sale each year. Explaining the rules of the raffle, Charity says, “It’s very simple. Prior to the start of the sale, all kids between 5 and 18 are welcome to get a raffle ticket.

Tickets are put in a bucket, and at the end of the sale one of our children pulls a ticket out of the bucket. The kids with the corresponding tickets win a heifer.”

Kade received a ticket, just like all the other children, and patiently waited until the end of the sale for the drawing. As the numbers were called, Kade slowly became anxious; his numbers were matching. But as luck would have it, the last number was read, and Kade’s ticket was no longer a match.

“I was real disappointed,” Kade says, “but then I came back the next year.”

A little over a year’s time passed, and it was once again time for the annual Crump Red Angus sale. Kade attended once again, praying he would possess a winning ticket.

“There had to have been more kids than adults there,” Jackie says, “so it’s crazy he was even so close the first time he went.”

As the sale came to an end, the Crumps announced it was time for the drawing. The crowded room fell silent as the ticket was drawn. As the numbers were read, Kade realized, once again, his numbers were corresponding with the winning ticket.

“His eyes got bigger and bigger the longer he looked at that ticket,” Jackie says.

As the last number was called, Kade looked at his ticket one more time. He looked up at Jackie and said, “I think I won.”

Kade rushed down and asked the Crumps to check his ticket again, just to be sure. To his surprise, it did, and Kade Benton was announced as the 2015 winner of the Crump Red Angus Youth Heifer Program. 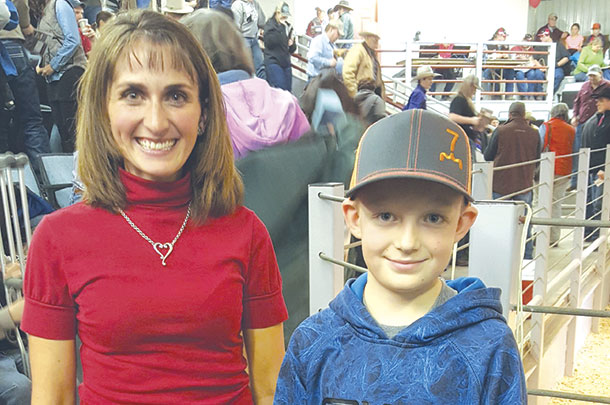 Since 2015, Kade has raised his Red Angus heifer, “Ruby.” Kade went on to show Ruby at his county fair. Ruby is now a mature cow and has helped Kade start up a small herd of Red Angus cattle in his family’s larger herd of Black Angus. 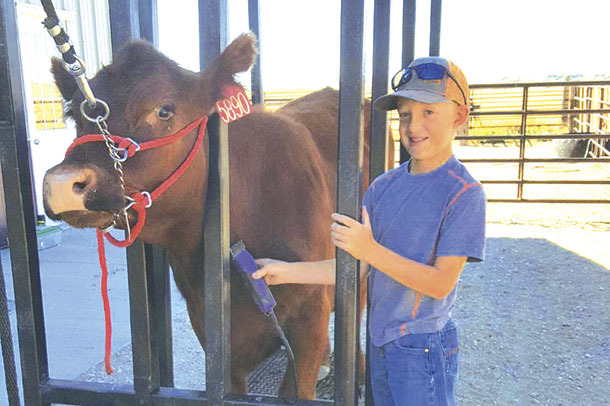 Ruby’s first pregnancy didn’t go so well; she slipped on ice and lost her unborn calf. But because the Crumps are invested in the future of agriculture, they generously offered up one of their own calves to be grafted onto Ruby.

“The goal is to give away a potload of heifers through the Youth Heifer program,” Jesse Crump says. “Our main goal is just to hopefully give a kid a foot in the door to the agriculture industry.” 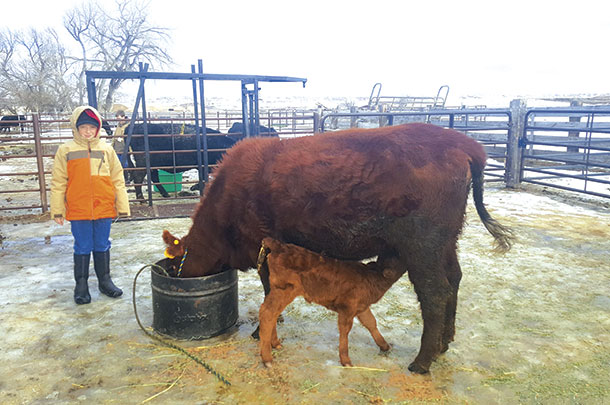 Crump Red Angus started the Youth Heifer Program in 2014 by giving away one commercial heifer from their herd, then on to one and two registered Red Angus heifers. At their 2019 sale, they will be giving away three heifers – two as part of their Youth Heifer Program and another that has been generously sponsored by Raymond Don Saunders of Saunders Land and Livestock in Gillette, Wyoming.

Charitable programs, such as the Youth Heifer Program, are what will make the future of the agricultural industry thrive.

The Crumps say they look at the program as a way of encouraging youth in agriculture and building a relationship with the next generation of cattle producers their children will one day conduct business with. Charity Crump points out any child in attendance is able to participate in the drawing with no strings attached. If the winner wants to drop the heifer off at the sale barn, they can, she says.

“We very much look forward to the heifer giveaway at the end of the sale,” Charity says. “It is great fun to see the kids engaged and intent as the numbers are being read off. It is really a blessing to us. It’s very rewarding.”

Since the birth of the Youth Heifer Program, five kids have known the feeling of holding the winning ticket in the palm of their hand. Five kids know how it feels to load up a Red Angus heifer in the back of their trailer and start their own herd.

Five kids have learned how to raise an animal of their own, a lesson that doesn’t just apply to the livestock industry but life itself. Five kids are now working toward a better future for agriculture, all because of the generous members of the agricultural industry and a little bit of luck.

“The kids will never forget it,” Jesse says. “It will leave a lifelong impression.”

PHOTO 1: Ruby, a speck of red hide, stands out among the Bentons’ herd during a cattle drive.

PHOTO 2: Kade Benton, 2015 winner of the Crump Red Angus Youth Heifer Program, stands with Charity Crump of Crump Red Angus after his ticket was selected to win the drawing.

PHOTO 3: Kade spending some quality time with his heifer, Ruby, and clipping her in preparation for show day.

Mayzie Purviance is a freelancer living in College Station, Texas.