To do this effectively, it helps to have the proper genetics for moderate frame size and excellent feed efficiency.

Cynthia and Ira Houseweart market grass-fed beef from their ranch near Hotchkiss, Colorado, selling direct to customers all over the state. When they select bulls, they don’t want any that are larger than a 4.5 frame. They are trying to get frame size of their cows smaller for grass-fed beef, and more efficient cattle.

“When we started our grass-fed beef program, we just grazed the edges of the hayfields – all the places where we couldn’t cut hay, including wooded areas and gulches. Now, we graze the hayfields as well,” Cynthia says.

“The fields are much healthier with cattle impact. We’ve done soil samples, and organic matter in places I’ve pastured is so much better than the pivots where we grow hay. Now we are figuring out how to graze the pivots as well. I’ve looked at Jim Gerrish’s methods for fencing pivots for rotational grazing,” she says.

Properly grazed, there is more forage production on hay ground than when it’s put up for hay, and grazing is better for the land. The trampling and litter adds natural fertilizer and organic matter to the soil. “We’ve seen that improving the soil improves the forage and the animals,” says Cynthia.

“We follow all the organic standards (we don’t use dewormers, antibiotics, synthetic fertilizers, etc.), but we don’t have that designation on our meat label.” With proper rotation grazing, there is no need for dewormers or fertilizer. The land is fertilized by animal impact, and the cattle are moved often enough to leave the worms behind. 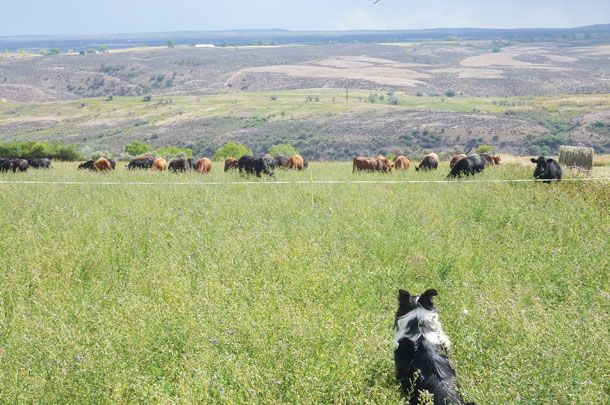 Their calves are butchered at about 18 months of age. “Our climate doesn’t allow us to graze all through winter. We feel fortunate when we can graze into early winter,” she says.

“We work cattle calmly, and they are easy to handle, because we select for good temperament and handle them quietly,” says Cynthia. This makes it much easier on the cattle, as well as the people, with no stress. The meat is also better when cattle are not stressed.

“They don’t get sick, and at butchering time, there are no dark cutters because the cattle are calm, with no adrenaline pumping through the body,” she explains.

Lee McCormick raises grass-finished beef at Piney River Cattle Company, near Nashville, Tennessee. “I use Murray Grey bulls and Lasater forage-based Beefmaster bulls on cows that are part Beefmaster. Murray Grey cattle have the most efficient meat quality for grass-fed beef that I’ve ever seen. The Angus people have done a really good job of selling black-hided cattle, but Angus are not consistent and don’t finish very well on grass compared to the Murray Grey,” says McCormick.

“The cross I want is a half Murray, half Beefmaster or three-quarter Murray and one-quarter Beefmaster. I just keep crossing back and forth. I have 450 cows that are basically a closed herd, and I’m raising my own bulls and heifers,” he says.

“I am a fan of forage-based Lasater cattle – how thick they are and how much meat they carry on the carcass and how well adapted they are to the Southeast. Murray Grey cattle don’t do as well in this climate because our summers are so hot and humid. But by crossing, and continuing to select for the ones that do well, you end up with cattle that are well-adapted,” he says.

He prefers a cow that is 1,000 to 1,100 pounds. She’ll raise a bigger calf – higher percentage of her own bodyweight – than a larger cow and is more feed efficient. A herd of moderate-framed cows with grass-based genetics will produce more pounds of beef per acre than a herd of larger-framed cows; you can run more small cows per acre, and they wean off a higher percent of their own weight.

Tim Hoven raises grass-finished beef in Alberta on a farm that has been in his family since 1910 – when his great-great-grandfather came to Alberta from South Dakota. “Our herd is primarily Angus-cross cows with Hereford and Black Welsh. I’m trying Galloway bulls to get some hardier genetics into the mix. We want a smaller-framed animal, and I prefer black because they stay warm easier in cold weather than lighter-colored cattle.” Black hair/hide absorbs more of the sun’s warmth.

Cattle are moved daily on the Hoven farm. “We run two herds – cows and calves in one herd and the fattening herd that’s finishing on grass for direct marketing,” he says. All the calves are grown out for beef.

“We usually finish them at about 24 to 28 months. The challenge here is cold winters. It’s hard to put much gain on them during winter on grass and harvested forages. We’ve tried using good second-cutting alfalfa, but if we get a stretch of very cold weather for a week or two, it’s like the animals’ metabolism changes, and they can’t put on more weight,” says Hoven. They need something besides alfalfa to generate body heat and gain weight during cold.

His cattle are finished later on spring grass. “During winter, they might not be putting on any fat, but their frame is growing. Once they hit green grass, they just boom and bloom,” he explains.

Rachel and Tyler Herbert have a ranch in southern Alberta, near Calgary. “This is great for us, because we have a huge market for our grass-fed beef nearby,” says Rachel.

“We customized our genetics to finish on grass. Our herd base is red and black Angus with a little Hereford, and we use black and red Angus bulls. We cull selectively to keep genetics efficient for grass-fed and for quiet temperament, which also makes for better beef,” she says.

Quiet animals spend more time eating and expend less energy being nervous, so they put more weight on. Their meat is also better, because they are never stressed and upset. “Animals that are stressed/nervous have higher cortisol levels; if they feel stressed when handled/moved to the slaughter facility, the meat will be darker and tougher. If the cattle are quiet and relaxed, the meat is better and much more tender.”

PHOTO 2: Pastures on the Houseweart ranch in Colorado are where cattle are finished on grass and direct marketed. Photo provided by Cynthia and Ira Houseweart.