How do you know what the nutrient concentration of the supplement should be?

Phosphorus will be deficient in rangeland pastures several months out of the year. Sodium, one ingredient of salt, is almost always deficient. Other macrominerals of concern include potassium and magnesium. Though the concentrations of these minerals vary, extremely high levels of potassium in the spring of the year, in combination with low levels of magnesium, can predispose cattle to grass tetany.

Trace mineral status in beef cattle is commonly assessed in two ways: first, by comparing plant concentrations to animal requirements (Table 1 and Table 2), or second, by determining blood or liver trace mineral contents from sampling of the herd (at least 10 cows). 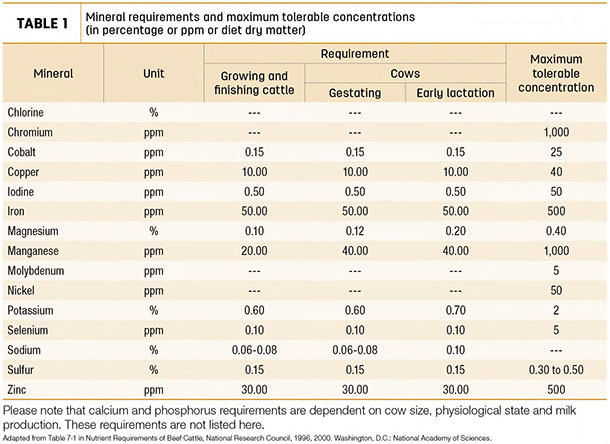 Liver biopsy samples are generally preferred to blood samples, especially for copper and zinc. Unless cattle are deficient in copper (less than .6 ppm), blood copper is not considered a reliable indicator of trace mineral status. 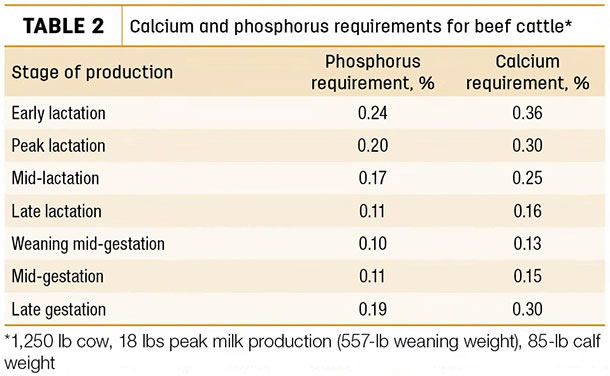 The difficulty of obtaining liver biopsies is they usually need to be obtained by an experienced veterinarian. Whole blood selenium is thought to be a fairly good indicator of cow selenium status.

Typically, mineral status is not assessed by blood and liver samples unless there is a concern about animal well-being and to discover how bad a nutritional inadequacy is in a herd. Most producers will determine the mineral status of their ranch by obtaining forage samples to be analyzed in the lab.

Sample forage twice a year, corresponding to peak standing crop and forage dormancy. We also recommend obtaining duplicate forage samples at each sampling location. By doing so, you can check for lab analysis repeatability of the forage samples.

Forage sampling should be stratified by the dominant soil type for the pastures of interest. Soil maps from the Natural Resources Conservation Service or your government land agency partner can assist in helping locate sampling areas.

It is suggested that a standardized plot frame be used for clipping forage (e.g., 40 by 40 centimeters). The palatable, herbaceous grasses and forbs should be clipped to ground level and placed in a paper bag for drying. A good heaping handful of forage is needed for an adequate sample.

If there are palatable half shrubs you are interested in, you can clip this year’s leaders into a separate bag. Larger shrubs such as antelope bitterbrush tend to hold nutritional value pretty well and can usually be skipped in your sampling unless you feel that they constitute a major part of the cows’ diet.

You will want to shop around for analyses rates from reputable labs. A majority of the minerals can be evaluated in one analysis by the lab using ICP (inductively coupled plasma-optical emission spectrometer) procedures and a group price will be applied for this analysis.

Cobalt and selenium will need to be analyzed separately. Unfortunately, forage selenium analyses are difficult to perform and must often be run in triplicate in order to minimize variation in the sample results. This mineral has been linked to weak calf syndrome, white muscle disease and in a few locations – selenium toxicity. If you do a full analysis of commonly analyzed forge minerals (Se, Ca, P, Mg, K, Na, Fe, Zn, Cu, Mn, Mo, S and Co), you can expect to pay at least $50 per sample.

At a minimum, you should evaluate forage for the macrominerals P, Mg, K and S, and for the trace minerals of Cu, Se, Zn, Mo, Fe and possibly Co. Sulfur (S) is usually evaluated for its antagonistic effects, as well as Mo and Fe for the same reason.

In 2016, the University of Idaho extension sampled forage at 35 locations on both irrigated and rangeland pastures across nine counties in Idaho. Following the sampling methodology described above, we discovered that laboratory replicates for all 14 minerals analyzed were good except for selenium.

After multiple reruns, we had forage samples for selenium shipped to a lab in South Dakota in order to generate reliable values, but at a much greater cost. Some of the forage selenium concentrations were so low as to be nondetectable (less than 0.02 ppm).

Figure 1 shows the overall results of the forage sampling for Idaho. Minerals circled in purple were considered deficient for at least part of the year. As expected, sodium was deficient in both irrigated and rangeland pasture at both sampling times. We also found antagonistic minerals to be present in some locations (Mo greater than 2 ppm; Fe greater than 400 ppm), which limit copper absorption.

In most locations across the West, Fe does not ever need to be added to the mineral mix beyond what would arise from inclusion of other feed ingredients.

Armed with your forage sampling results, you can get a reputable feed company to mix a mineral mix that will supply “what’s missing” from your forage. You should plan on an average of about 3 ounces per day of consumption. Individual intake will vary by the day and season of year.

Most cows will not partake of the mineral mix every day. In an Arizona study, individual cow mineral intake in 2010 varied from 0 to 35.6 ounces per day when the feeder was visited, and in 2011, from 0 to 76.7 ounces per day.

In the August 2017 issue of Progressive Cattleman, Reinaldo Cooke, a beef cattle specialist at Texas A&M University, shared results from an Oregon study that showed an increase in weaning weight for mineral-supplemented pregnant beef cattle. In a series of Arizona studies, when rainfall was more normal, weaning weights for calves from supplemented cows were greater than for control cows, and the yearly calving interval was shorter the year following.

In periods of extreme drought or greatly increased rainfall, the differences between supplemented and control cows with respect to weaning weights can be marginal or not significantly different.

Unless you are experiencing a drought year or extremely wet year, a one-time investment in forage sampling followed by laboratory analyses can generate the information you need to engineer a mineral supplement that will meet your needs for years to come.