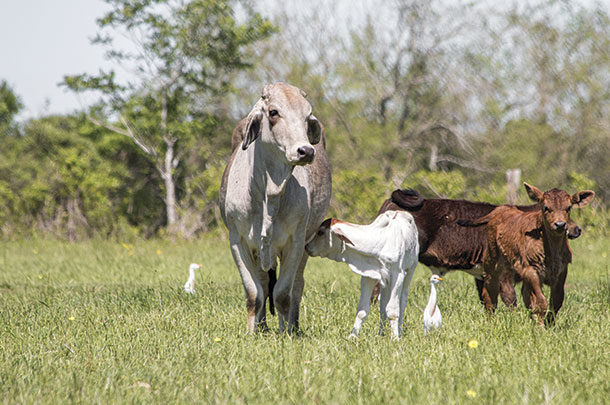 According to the 2007-08 USDA’s National Animal Health Monitoring System beef cow-calf study, 93.6% of calves were born alive and survived to weaning.

Many factors influence calf rearing from conception through weaning. Unfortunately, some key influences are beyond our control, including environmental conditions and weather extremes. Climatic conditions heavily influence crop quality and availability, which in turn affect animal health and nutrition, including one factor overlooked in many beef operations – the potential for mycotoxin contamination in feeds.

Mycotoxins are toxic compounds produced by fungi that contaminate a variety of feedstuffs. Such toxins negatively affect animal health, reproduction and performance through a variety of mechanisms. Although cattle producers face many uncontrollable challenges, they can help drive successful outcomes through strategic decisions and management practices. Increased awareness and understanding of mycotoxin-related effects, as well as implementation of a comprehensive mycotoxin risk-management program, can limit losses associated with such anti-nutritional factors.

Surveys have identified mycotoxins frequently occur in foods and feeds such as grains that are important to human and monogastric nutrition. Additional research has focused on the mechanisms of action and effects of mycotoxins. Typically, ruminants are considered more resistant to mycotoxins than monogastrics due to natural detoxification by rumen microbes. Some natural microbial detoxification occurs, but does not provide complete protection to ruminants.

Historically, grazing animals were presumed to have less exposure to mycotoxins because forages were thought to have low risk. However, increased research shows that mycotoxins occur in forages including pasture grasses. Complex ruminant diets, consisting of concentrate feeds, byproducts and forages, expose cattle to a broad spectrum of mycotoxins.

Hundreds of mycotoxins with diverse chemical structures exist and when absorbed systemically, act on multiple organs and tissues, resulting in a variety of effects and clinical signs. Increased understanding of mycotoxin toxicities helps identify potential threats to cattle health and productivity. Observable clinical signs of mycotoxicosis (disease caused by mycotoxins) occur when animals consume high concentrations of toxins, but the signs are frequently non-specific and attributed to other disorders or diseases in herds. Differential diagnosis can identify mycotoxin issues including immune dysfunction, which predispose animals to secondary infections.

Reproductive success is required to sustain cow-calf operations because without conception, gestation, birth and survival of a calf, there is no production in this system. Several mycotoxins are associated with reproductive effects including zearalenone (ZEN) and ergot alkaloids. Fusarium fungi produce ZEN, which is structured similarly to estradiol.

Tall fescue toxicity is the best-known forage-related mycotoxin challenge in the U.S. and is associated with issues including poor reproductive performance. A fungus that lives within wild-type tall fescue plant tissue called an “endophyte” (“endo” = within, “phyte” = plant) contributes to tall fescue being a hardy grass, but also produces ergot alkaloids toxic to livestock.

Ergots restrict blood flow, leading to gangrene of extremities (ears, tails, hooves) and poor blood supply to vital organs including the reproductive tract. Loss of pregnancy may occur. Agalactia (lactation failure) can also occur, especially when cows graze endophyte-infected tall fescue during the final trimester of gestation, leading to a lack of colostrum and milk for the calf.

Calving date is crucial to cow-calf efficiency and profitability for a variety of reasons. Breeding season determines calving. Time of calving influences when calves go to market. Grazing and feeding strategies are variable across regions and influenced heavily by environmental conditions and cow nutritional requirements. Aligning calving dates so that the times of highest nutrient demand (around calving and peak lactation) coincide with optimal forage quality and availability can maximize grazing potential and limit supplemental feeding.

According to a 2004 report by Dargatz et al., 63.9% of calves were born February through April, heading into spring green-up of pastures. Considerations for potential mycotoxin exposure in relation to breeding season and calving date can benefit cow-calf reproductive success, health and performance. Ergovaline levels peak during summer and are concentrated in seed heads but are also present in plant tissue.

Management practices such as close grazing or clipping can help limit ergovaline exposure. An ongoing survey of fresh pasture as well as dry hay and ensiled grasses in the U.S. has identified ZEN and other mycotoxins in various grass types including bermudagrass. Mycotoxin screening of pastures and feeds offered to animals, especially breeding or pregnant cattle, which are underperforming expectations and experiencing challenges including poor conception or aborted fetuses should be considered.

Various mycotoxins negatively affect gastrointestinal health and immune function including trichothecenes (such as deoxynivalenol, also known as “vomitoxin;” nivalenol and T-2 toxin). Similar to ZEN, trichothecenes are produced by multiple species of Fusarium fungi. These toxins occur in a variety of feedstuffs, including grains and forages, and are disruptive to animal health and performance. Intestinal cells have two main functions: (1) to absorb nutrients and (2) to be a barrier, preventing harmful substances from entering the bloodstream.

Numerous mycotoxins can disrupt these functions, leading to poor growth and reduced production capacity. Reduced gut wall integrity can expose other organs to pathogens or toxins that enter the bloodstream, increasing the risk of disease. Damage to the gastrointestinal tract and disruption of nutrient absorption can also lead to diarrhea and bloody feces.

Furthermore, a substantial portion of the immune system is located in the gastrointestinal tract. Damage to the gut weakens immune function in both the cow and the calf. Trichothecenes can directly impair immune cell production and function. Natural immune response to vaccinations may be reduced, leaving cattle susceptible to diseases despite vaccination. Immunoglobulin (Ig) production, boosted through a robust vaccination program, can be adversely affected and reduce colostrum quality.

Calves rely on protection from passive transfer of Ig via colostrum until their own immune systems develop. Calves that do not receive ample amounts of high-quality colostrum are more susceptible to disease and death. Therefore, proper immune response in the cow is needed to support calf health and survival. Additionally, research suggests trichothecenes can negatively affect reproduction through a variety of mechanisms.

Many variables influence cow-calf health and performance as well as mycotoxin occurrence in feeds. Despite uncontrollable challenges such as weather conditions, we can implement measures to give the best chance of success. An area for consideration is limiting mycotoxin risk. Monitoring contamination and implementation of interventions such as ration adjustments as well as use of in-feed mitigation strategies can help reduce mycotoxin challenges in herds. Commercial products are available that provide broad-spectrum control via combined tactics of binding, degradation and protective plant and algal extracts to support liver health, immune function and gut health.

PHOTO: Certain strains of mycotoxin can have a significant impact on reproductive health and passive immunity of heifers and cows. Photo by Cassidy Woolsey.