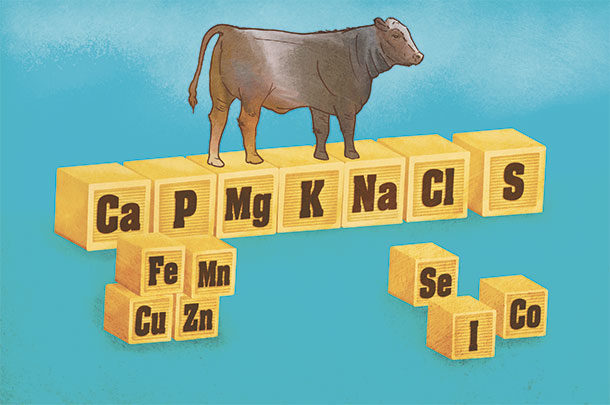 My first rumination deals with small numbers. Someday when you get the chance, look at a table listing the nutrient requirements for your animals. You can find these tables in many nutritional reference books – the National Research Council bulletins, the “Cow-Calf Management Guide,” etc. Pay particular attention to the mineral requirements.

One thing you’ll immediately notice is that some mineral requirements are expressed as a percentage of the diet – calcium, phosphorus, magnesium, potassium, sodium, chlorine and sulfur. These elements are often called the macro minerals because they are needed in large (macro) amounts.

Requirements for the other minerals are expressed in parts per million (ppm). Since these elements are only needed in small amounts, they are called the “micro” minerals. Look at these levels closely. Iron, manganese and zinc are required in the range of 20-50 ppm. Copper is required at slightly lower levels, in the range of 7-13 ppm. But three minerals – cobalt, selenium and iodine – are required in very, very tiny amounts – at only 0.1-0.3 ppm. This is intriguing.

Why? Because the three minerals animals need in the smallest amounts are the same minerals plants don’t need at all.

I don’t think that this is an accident. In the broadest sense, evolution may be random, but on the molecular level, evolution is rigorous and unforgiving. It has forced our livestock to use rare resources in the most efficient way.

From a biochemical perspective, plant and animal cells must accomplish many of the same metabolic tasks and therefore contain similar metabolic systems. With only a few exceptions, plants require the same array of nutrients as animals. Most of this overlap occurs in the macrominerals and with some microminerals. It’s true plants also have their own special needs for elements our livestock cannot use – like boron, which is involved in plant fiber metabolism and molybdenum, which is used in plant nitrogen metabolism and nitrogen fixation. But what about the three minerals plants don’t need – iodine, cobalt and selenium?

Well, animals use iodine almost exclusively in thyroid hormones. Since these hormones are critical for controlling metabolic rate and heat production, plants don’t have much need for them or iodine. Unless, of course, plants evolve into warm-blooded organisms – a concept I’d rather not contemplate.

The second mineral, cobalt, only occurs in animals as a component of vitamin B12 (properly called cyanocobalamin). All animals use vitamin B12 in amino acid metabolism and red blood cell formation, and ruminants especially use it in the liver for converting rumen fermentation products into glucose. But again, plants do not have red blood cells or rumens or even livers, and thus they have no need for either vitamin B12 or cobalt.

And selenium – a favorite topic of workshops and the internet – is used by animals primarily in cellular anti-oxidant systems and also a few specialized enzymes (including some that work with iodine).

Most plants contain no metabolic systems that require selenium. But remember the periodic table? Elements in the same column of this table have similar chemical characteristics. Look at selenium. Directly above selenium, in the same column, is sulfur. Sulfur, of course, is an integral atom in two essential amino acids – methionine and cysteine – and thus, plants require relatively large amounts of it. Since selenium chemically resembles sulfur, plant roots don’t differentiate them very well and will absorb selenium from the soil along with sulfur.

Plant cells happily incorporate this selenium into amino acids to form selenomethionine and selenocysteine. The plants insert these seleno-amino acids into various proteins in place of the regular sulfur-containing amino acids. Although those proteins may not function as well, the aberrant amino acids do no real harm because their levels are so low.

So let’s engage in some wild speculation. Iodine, cobalt and selenium show up in most forages because the absorptive roots allow them to come along for the ride. Although plants don’t need these elements, these atoms generally do no harm, and they are absorbed in small amounts if they occur in the soil. Animals, on the other hand, require all three minerals for critical metabolic systems. And it all comes back to evolution. Evolution ruthlessly selected animals that could survive on low levels of these minerals. Animals that genetically required higher levels of these minerals tended to leave the gene pool early.

My second rumination is about cyanide. This topic is indeed nutritional, although cyanide is not usually considered a nutrient.

You probably have heard about plants with the potential for cyanide toxicity – apple seeds, wild cherry and young sorghum-sudangrass. You may have also heard that very low levels of cyanide are usually not dangerous because animals can detoxify these molecules.

But have you ever considered why animals – livestock, birds and humans – have the metabolic ability to detoxify cyanide? Let’s think about this.

When cyanide is absorbed across the gut wall, the blood carries it to the liver and other cells, where a specialized enzyme system converts cyanide into the nontoxic molecule thiocyanate, which the kidneys then dump into the urine for excretion. But enzyme systems are expensive. It costs energy and nutrients to manufacture all these enzymes, and evolution is notoriously frugal about overspending. So why do animals spend nutritional capital just to build extra metabolic equipment they rarely use?

Because cyanide is not rare. It’s actually a rather common molecule in the plant world. Plants use cyanide compounds as weapons in their ongoing biochemical warfare to stay alive. Cyanide discourages certain animals like slugs, weevils and grasshoppers. Plant species that contain toxic levels of cyanide are well-known, but a surprising number of other plants can contain low levels of cyanide, including forages like white clover, common vetch and even some human foods like cassava and lima beans.

But cyanide is extremely toxic to animals. In animal cells, cyanide irreversibly binds to the critical enzyme cytochrome oxidase, which controls the last step in the extraction of energy from carbohydrates using oxygen. Cyanide is so devastating because it completely blocks the main energy-producing sequence in a cell. That’s why animals that die of cyanide toxicity have blood that’s bright, cherry red – because their cells cannot use the oxygen in the blood, and thus the hemoglobin cannot get rid of it and stays bright red.

Again, let’s think about nutritional evolution. Animals like to eat. If plants contained low levels of cyanide, and animals who ate those plants didn’t have mechanisms for detoxifying cyanide, those animals wouldn’t survive very long. This includes grazers, browsers and species like us omnivorous humans who eat plants as well as animals. Eons of evolution, therefore, exerted relentless pressure.

Genetic lines that developed the metabolic equipment for coping with low levels of cyanide did a better job of reproducing than genetic lines that lacked this equipment. Maybe not enough equipment to allow us to consume a meal of cyanide truffles but enough to keep us alive when we encounter the occasional cyanide molecule.

Enough. It’s time to stop ruminating about nutrition and spend some time fishing.

Woody Lane, Ph.D., is a livestock nutritionist and forage specialist in Roseburg, Oregon. He operates an independent consulting business and teaches workshops across the U.S. and Canada. His book, From The Feed Trough: Essays and Insights on Livestock Nutrition in a Complex World, is available through Woody Lane.