Mitigating nitrate toxicity in cattle requires an understanding of how cattle are affected physiologically and how nitrates accumulate in forages. I will explain the process and how to manage for nitrates below.

Nitrite accumulation in the rumen

Under normal circumstances, nitrate is converted to ammonia in the rumen, which is used by rumen bacteria. As the rumen bacteria complete their life cycle, they are excreted from the rumen and can be digested and used by cattle for protein. When higher amounts of nitrates are consumed, an accumulation of nitrite may happen more quickly than it can be converted to ammonia and protein.

Excess nitrite is then absorbed into the bloodstream where it converts hemoglobin to methemoglobin, which is unable to transport oxygen. Therefore, nitrate poisoning causes lack of oxygen going to essential organs and tissues and can cause death in ruminant animals as shown in Figure 1. 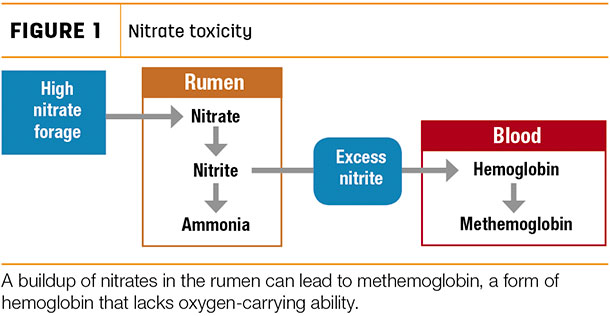 Plant tissue accumulates nitrate during the night when photosynthesis is inactive, peaking in the morning. Nitrate is then quickly converted to protein when adequate sunlight energy is available. In some cases, the roots accumulate nitrate faster than the plant can convert nitrate to protein, causing dangerously high levels of nitrates. Plant stress can also cause higher nitrate accumulation in forages. Events such as hail, frost, long cool spells, drought, pests, disease and herbicide application can all increase the nitrate concentration of forages.

Certain plants are also more likely to accumulate nitrates, such as annual cereal grains which are commonly used in cover crop mixes.

In 2018, monocultures of annual ryegrass, oats, winter wheat, barley and triticale were planted in Salmon, Idaho. These varieties were chosen because they are commonly used in cover crop mixes in the area. The plots were planted in one quarter of a pivot-irrigated field, and each variety was planted in four separate plots spread out along the pivot track. The cereal forages were planted in late April and were intended to be grazed beginning in June. 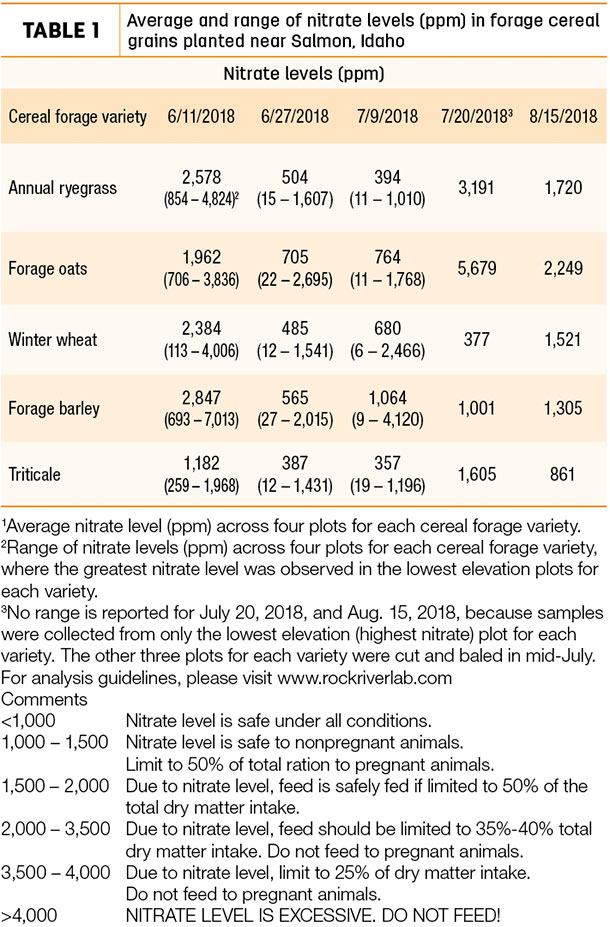 The plots (one of each variety) which were planted in the southwestern corner of the pivot, which were also lower in elevation, contained the greatest nitrate levels, which we speculate was due to above and below ground water runoff which settled in the low part of the field. These plots were left uncut in order to monitor nitrate levels throughout the growing season.

Brassicas, such as turnips and radishes, are also often included in cover crop mixes. Unfortunately, some of these varieties can also contain harmful concentrations of nitrates. In some cases, fields containing turnips were reported to have nitrate concentrations in excess of 20,000 parts per million (ppm) nitrate.

Because many plants are naturally higher in nitrates, and nitrate levels in plants can fluctuate so easily when exposed to stressors, it is important to test cover crop forages for nitrate concentration prior to putting cows out to graze. Additionally, it is important to test hays and silages prior to feeding them to cattle. Cover crops are typically used in situations where farmers wish to improve soil conditions and soil fertility which are commonly influenced by mineral imbalances.

To reduce the risk of poisoning, it is prudent to collect samples and submit them for nitrate analysis prior to turning cattle onto a cover crop field which is at risk for nitrate poisoning.

Fields at the greatest risk of high nitrate levels are:

Most laboratories will provide guidance, based on the results, of how to proceed with utilizing the forage tested. Once you are certain your field nitrate levels are safe for grazing, there are a few extra precautions you should take to mitigate the risk of nitrate poisoning. Nitrate poisoning is impacted by two things: the concentration and quantity of nitrates consumed.

Some strategies to mitigate the risk of poisoning are to: