Dave Natzke
Monthly U.S. milk production was higher than the same month a year ago for the first time in June 2022, as cow numbers begin to pick up.
Dave Natzke

Reviewing the USDA preliminary estimates for June 2022 compared to June 2021:

Compared to a year earlier (Table 1), June 2022 cow numbers were reported higher in eight states and lower in 15 states, with Arizona unchanged. 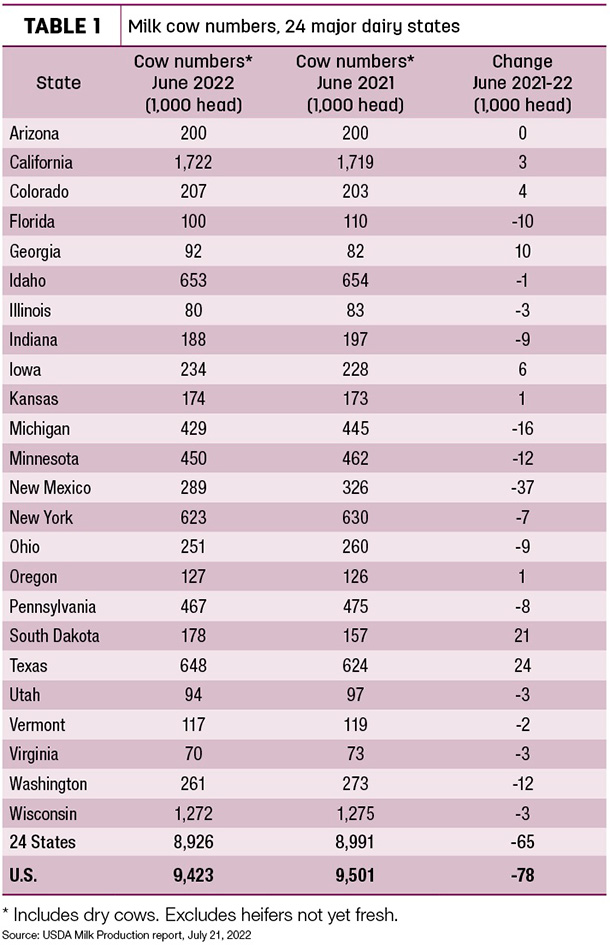 Texas led all states in year-over-year growth, up 24,000 head from June 2021, followed by South Dakota, up 21,000 head, and Georgia, up 10,000 head. Compared to a year earlier, cow number declines were again heaviest in New Mexico, down 37,000 head. Combined with New Mexico, Michigan, Washington, Minnesota and Florida dropped 87,000 cows from the year before.

Compared to a month earlier, Texas cow numbers increased by 5,000 head in June, with New Mexico down 3,000 head.

Dairy cull cow slaughter continues at a slower pace than a year ago. Through June, monthly slaughter in federally inspected plants totaled 1.52 million head, about 42,500 head fewer than the same period a year earlier.

Milk per cow up a little

Growth in milk production per cow continues to be slow, with the U.S. and major dairy states monthly milk output up 20 pounds from year-ago June levels (Table 2). 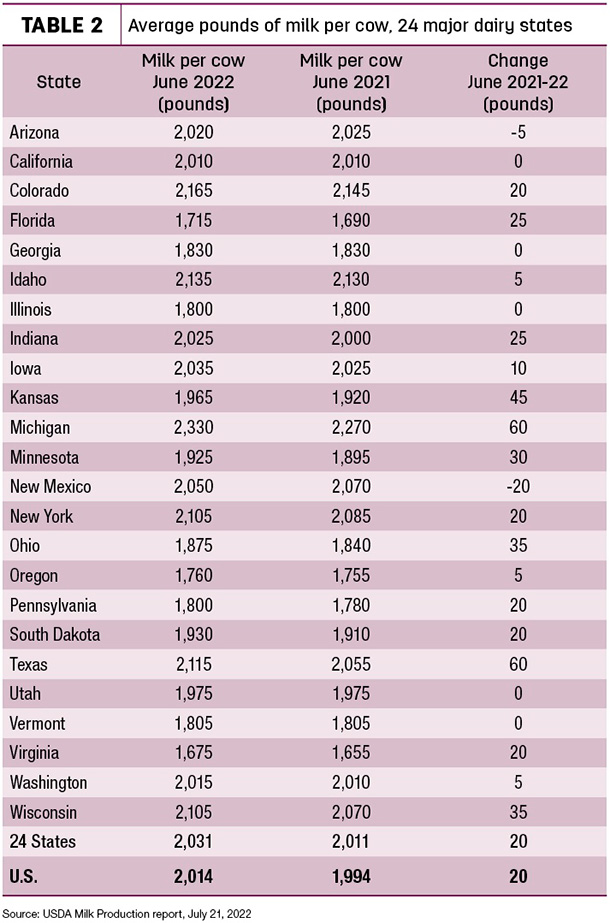 Year-over-year milk per cow increased in 17 states, led by Michigan and Texas, each up about 2 pounds per day. Lower output per cow occurred in New Mexico and Arizona.

Despite lower cow numbers and slow growth in milk output per cow, overall milk production was up slightly in the U.S. and among major dairy states compared to a year earlier.

June 2022 year-over-year milk production was down in 14 states, led by a combined decline of 143 million pounds in New Mexico, Washington, Florida, Indiana and Michigan. That was more than offset by a combined 172 million-pound increase in Texas, South Dakota and Wisconsin.

In shuffling among the 24 major dairy states, Georgia again surpassed Florida in total milk production for a third consecutive month, while Idaho stayed above Texas for the second month since last September.

On a percentage basis, New Mexico and Florida milk production was down 12.3% and 7.5%, respectively, compared to June 2021.