Dave Natzke
Stronger milk prices and tighter supplies of cows and heifers pressured U.S. average prices for dairy replacements higher in April according to latest estimates from the USDA. Meanwhile, cull cow prices to end the first quarter of 2022 were the highest in more than six years.
Dave Natzke

The USDA estimates are based on quarterly surveys (January, April, July and October) of dairy farmers in 24 major dairy states, as well as an annual survey (February) in all states. The prices reflect those paid or received for cows that have had at least one calf and are sold for replacement purposes, not as cull cows. The report does not summarize auction market prices.

Compared to the previous quarter, average replacement cow prices were up all 24 major dairy states tracked by the USDA (Table 1). The largest quarterly increases were in Pennsylvania, up $300 per head, and Indiana, Michigan and New York, all up $270 per head. 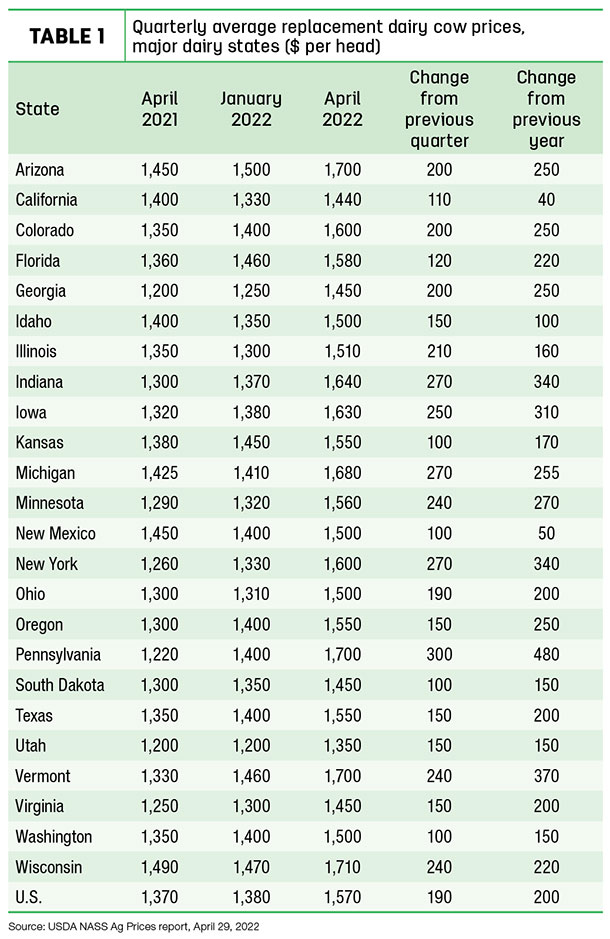 In contrast, South Dakota, Texas – the two states with strongest quarterly growth in cow numbers – had some of the smallest increases in replacement cow prices.

In most of those markets, prices for average Holstein springers have been climbing in recent weeks, with top springers bringing $1,600-$2,400 per head. Price trends are similar for short-bred heifers.

While higher milk prices are providing incentives to add cows to the herd, cull cow prices are also on the rise.