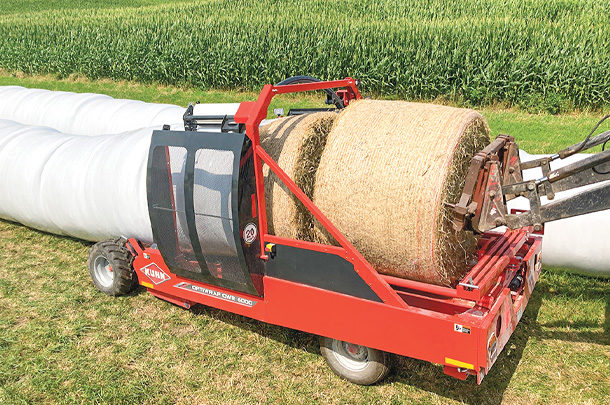 The rationale for wrapping dry bales is that a few layers of plastic applied by an in-line wrapper could help bales shed rain and snow more effectively, as well as prevent moisture from wicking up from the ground, resulting in less dry matter loss to spoilage. A few layers of film are perceived to be a more economical option compared to building a permanent storage structure or other options to help maintain bale quality during storage.

There are many variables to consider when wrapping dry bales, and a little experimentation may be required to see what works in different areas and conditions. Let’s discuss some key points to keep in mind when considering wrapping dry hay bales.

When wrapping silage bales, the goal is to lock out air with layers of plastic film, specifically limiting the availability of oxygen inside the bale. Bales spoil when microorganisms in the hay have enough air and water to be active and consume nutrients in the crop. As they eat and breathe, they create heat and water vapor in the bale. In addition to using up nutrients, they can also cause damage to the crop from high temperatures. Limiting the available oxygen causes the microorganisms to go dormant, so they are not consuming nutrients, preserving nutritional value for livestock.

Generally, to limit the available oxygen, it takes a minimum of 6 mil of total plastic wrap (six layers of 1-mil film or four layers of 1.5-mil film) to prevent air movement. Depending on crop type, moisture, length of storage and other factors, more layers may be required. It is important to wrap silage bales as soon as possible after baling to prevent the initial heating that can lead to mold, spoilage or combustion.

But what are the considerations for dry bales? There is no intention to create an environment suitable for fermentation. The plastic film is simply meant to prevent moisture from moving into the bale. A few layers of film should help the bales shed water and prevent wicking moisture up from the ground, right?

The first thing to look at is the necessary number of film layers. If you look at the table in the operator’s manual for almost any wrapper, it will indicate a higher layer count for dryer bales. Part of the rationale is drier hay has sharper stems, which are more likely to poke through the first few layers of film until the stems are laid over. This is a big issue when trying to prevent air movement into the bale, but it also creates openings for moisture to get in as well. Depending on crop type, a few layers of film may not provide much benefit in preventing moisture from getting into the bale unless a layer count comparable to wrapping silage bales, or higher, is applied.

There is often still an outer layer of spoilage when dry bales are wrapped. The film creates a barrier where moisture inside the bale will accumulate, microbes will be active here and decompose the outer layer where they have moisture and oxygen. Some people suggest using a darker film to try raising the film temperature and theoretically evaporate a portion of this moisture on the outside layer of the bale. However, little research has been done to determine the effectiveness of this practice. Even with a wrapped bale under 20% moisture, there will likely be an outer layer of spoiled hay.

Another aspect to consider, specifically for round bales, is how they are bound. Sisal twine, plastic twine or net wrap can play a role in the decision to wrap dry bales. Bales stored outside bound with sisal twine will not shed water as well as bales wrapped with plastic twine. Net-wrapped bales will shed water better than plastic twine. When considering wrapping bales, greater benefit may be realized if the bales are tied with twine, since the film provides more protection. However, if the bales were net wrapped, wrapping with film may not have as much impact.

Additionally, the type of crop being baled also plays a role in how well a round bale sheds water. Grassy crops with large leaves will tend to provide a better surface for water to run off, resulting in less spoilage. Crops like alfalfa, that don’t have long, wide leaves, can allow water deeper inside the bale, causing more spoilage.

Due to the nature of how square bales are made, they don’t have the same water-shedding surface as round bales. Regardless of crop
type, twine used or bale orientation during storage, water tends to penetrate farther into square bales. However, some of the same film wrapping considerations for round bales still apply. One side of a square bale will be cut by the plunger knives, meaning there will be sharp crop stubble that may puncture the film unless sufficient wrap layers
are applied.

Putting film around square bales will likely make a difference in how much water is shed and help preserve the bales if enough wraps are applied. However, one item to consider is that in-line wrappers are limited by how long of a bale will fit through the hoop. Due to weight and handling, silage bales are traditionally no more than 6 feet long, where dry bales are often closer to 8 feet long. If you plan to wrap dry bales, keep in mind that shorter bales mean more bales to handle, more twine used, and an increase in time and expense of trucking bales.

Determining if wrapping dry bales will be profitable for your operation will depend on several factors. It is best to determine how much dry matter can be prevented from spoiling compared to your current storage system. Putting a few layers of film on round alfalfa bales bound with sisal twine could make a noticeable difference. However, putting film wrap on sudangrass bales bound with net wrap may not make a significant difference.

Due to the nature of square bales, a few layers of film should make a difference in how much water gets into the bale, but it is important to consider the extra expense of handling additional bales when they are made short enough to fit through the wrapper.

PHOTO: This dry hay has been wrapped with net wrap and will be further protected from moisture and decay using an inline wrapper. Photo courtesy of Kuhn North America.