Ken Bailey
Milk pricing is complex, but the producer price differential (PPD) is also frustrating. First, most producers don’t understand how it is calculated. Second, a negative PPD, which happens a lot, looks like a milk check deduction (it isn’t actually).
Ken Bailey

Ken Bailey is a consultant and author of the textbook Dairy Economics: Pricing, Policy, and Risk ...
Email Ken Bailey

Third, it’s unpredictable and therefore a problem when using the Class III milk price to hedge your milk checks. For me, it’s the number one thing that has to go under Federal Milk Marketing Order (FMMO) reform.

So why do we have PPDs, and why are they different for each federal order? Before FMMO reform in 2000, most orders paid farmers on a volume basis. For each additional hundred pounds of milk, farmers were paid a calculated price plus an adjustment for butterfat. Everyone in the order got the same price. The USDA would announce both the Class III price and the pool value, all on a hundredweight (cwt) basis, subject to butterfat adjustments.

Under FMMO reform two decades ago, component pricing was introduced in most orders. While everyone in a pool started with the same price, it was adjusted for butterfat, true protein and other solids. With the change, there was volume pricing plus component-based pricing, two very different methods.

USDA creation of the PPD was based on the idea that there were two basic classes of milk: One was manufacturing (both Class III and Class IV), and the other was fresh (Class I and II). The fresh market was, in theory, priced above the manufacturing market by the addition of Class I and II differentials. Farmers would be paid the manufacturing value based on components, and “topped off” by the amount of the PPD to arrive at the entire pool value.

The USDA choose Class III component prices of fat, true protein and other solids as the method of paying the manufacturing value. The PPD was then calculated as the difference between the pool value (computed on the basis of components) and the Class III producer value. Dairy farmers would receive the entire pool value in every milk check.

So why do we have negative PPDs? That was not supposed to happen. Unless we are talking about hedging, technically it doesn’t make a difference since farmers each month receive the entire blended value of Classes I through IV on their milk checks. That said, here are some reasons.

First, while Class III (and IV) milk pricing is based on a full month survey of commodity pricing, Class I prices and Class II skim is based on “advanced pricing.” That means there is a month-to-month timing difference between the fresh and manufacturing markets. Second, the value of the Class I market has been eroding over time as fluid milk consumption has declined across all federal orders. Third, as cheese pricing has become more volatile, Class III processors have “depooled” their milk when they predict that the classified value of their plant would exceed the pool average to avoid a payment into the FMMO pool. This further lowers the value of the pool price relative to the announced Class III price. So dairy producers who remain in the pool are more likely to face a negative PPD.

The PPD is a terrible predictor of the dollars that eventually end up in the milk check. This can be seen in Figure 1, where the farm price of milk at standard (the statistical uniform price) is graphed relative to the PPD for the Upper Midwest FMMO 30. 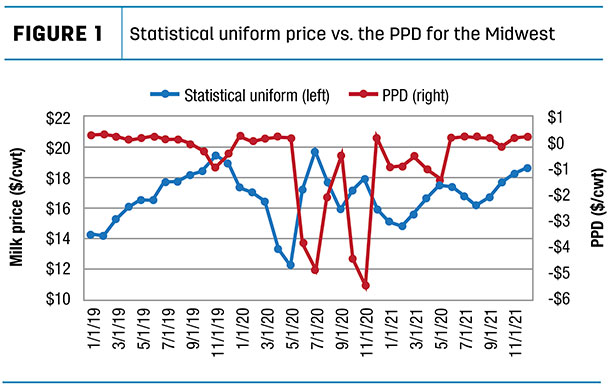 Ignoring for the moment the chaos of COVID lockdowns that occurred in 2020, one can plainly see that the PPD is inversely related to the farm price of milk. In most months, as the PPD went down, the total value of the milk check went up. So a negative PPD really doesn’t imply that the milk check will be lower than the previous month. And for sure it doesn’t mean anything was taken from the milk check, since most orders have different class uses of milk, whereas components are based only on Class III.

The PPD is calculated in Table 1 for September 2021. 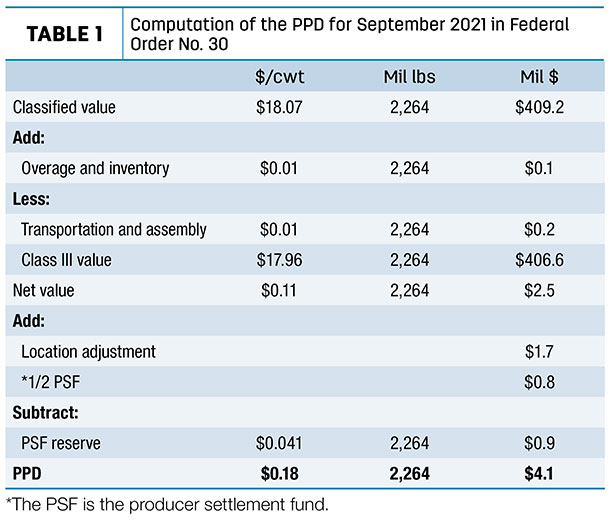 First, the classified value of all milk use is calculated. Each plant in the pool reports how all their components were used. Then the USDA uses announced prices to compute the classified value. In this example, the USDA computed a classified value of $409 million. Next, there are minor adjustments based on calculated overages, inventory of dairy products at these plants and other issues related to transportation. Then the USDA deducts the farm value of Class III milk components as reported on all producer milk checks (value of fat, true protein and other solids). The USDA adds back all plant-level location adjustments that are different than the base pricing county/city for the PPD. So a plant located in a negative-30-cent pricing zone would in effect be adjusted back to the central zero pricing zone. Finally, there are additions and subtractions related to the producer settlement fund, which is a reserve the USDA holds for future audits and payments.

Under the next FMMO reform, the USDA could simply get rid of the PPD calculation and instead pool component values in each order. They do keep track of the protein and other solids used in Classes I, II and IV, so that data is already available. The USDA would stop announcing the statistical uniform price and the Class III and IV prices at standard test and instead just announce the fat, true protein and other solids prices for each pool.

Location adjustments for plants and producers would add a further wrinkle to the calculation, as would hedging, since component pricing would be pool specific. But this change would end negative PPDs, simplify the milk check and stop the implication that the USDA is taking money out of the milk check.

Ken Bailey is a consultant and author of the textbook, Dairy Economics: Pricing, Policy, and Risk Management. He addresses U.S. and global dairy, trade, risk management and other issues in his blog (Ken Bailey Dairy Consulting).