December prices for all individual classes of milk were up from November:

December Class III-IV milk prices moved higher due to increases in values of butterfat and milk solids used in monthly milk price calculations. However, the value of protein declined.

Preliminary data indicated the butterfat content of December milk marketings was the highest of the year in most FMMOs, while average protein tests were down slightly from November peaks. Other solids’ tests were mostly unchanged.

With higher individual milk class prices, December blend or uniform prices at standardized test rose in all FMMOs (Table 1) and were the highest since November 2014. When multiplied by milk class utilization in each FMMO, December uniform prices increased in a range of $0.40-$1.06 per cwt across all 11 FMMOs compared to November. The high uniform price for December was $23.97 per cwt in Florida FMMO #6; only one FMMO, the Upper Midwest #30, had a uniform price under $19 per cwt. 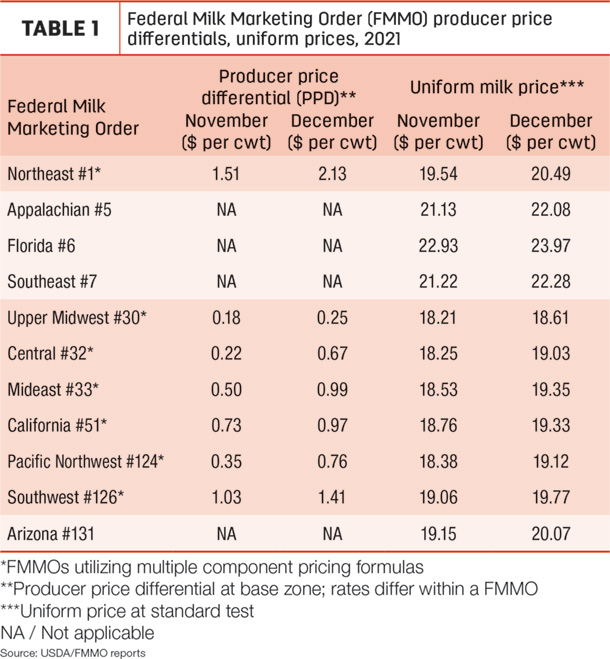 December baseline PPDs were positive, up 7-62 cents per cwt compared to November (Table 1) and in many cases the largest positive PPDs in two years or more.

As we remind you each month, PPDs have zone differentials within each FMMO. Also, whether positive or negative, individual milk handlers may apply PPDs to milk checks differently, and deductions may not always be fully transparent.

December’s class milk prices created a wide, $1.52-per-cwt gap between Class III-Class IV prices, providing incentives for Class IV depooling from FMMO pools. You can get a general picture of depooling in a couple of ways: on a volume basis, comparing monthly pooling totals to previous months; and on a percentage basis, comparing the percent utilization a specific class of milk relative to all milk pooled that month.

Looking at December, Class IV milk pooled across all FMMOs fell to about 1.23 billion pounds (Table 2), the lowest volume since January-February 2019. December Class IV milk utilization represented less than 10% of total FMMO milk marketings, about one-third of the level seen in the first half of 2021 and the lowest percentage since January-February 2019, when Class IV prices were running $1.50-$2 higher than Class III milk. 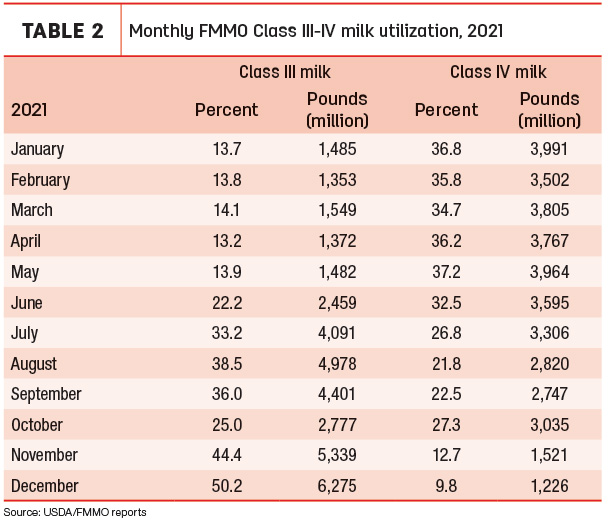 December’s Class III-IV milk relationship again had an opposite impact on Class III pooling. With the Class III milk price weaker than Class IV price, Class III handlers brought more milk back to the pool. On a volume basis, Class III milk pooled in December was estimated at about 6.28 billion pounds, more than four times the average monthly volume pooled during the first five months of 2021 and the most since mid-2019. As a percentage of utilization, Class III milk represented about 50% of the total FMMO pool, also the highest since June 2019.

While fluctuating, that spread may maintain Class IV depooling incentives. Individual FMMO pooling, depooling and repooling rules play a role in how much. And milk markets change, so the ride continues.

Even though the December Class IV price was substantially higher than the month’s Class III price, the difference between the advanced Class III skim milk pricing factor ($10.73 per cwt) and the advanced Class IV skim milk pricing factor ($12.21 per cwt) is $1.48 per cwt. Based on Progressive Dairy calculations, the Class I mover calculated under either the “average-of plus 74 cents” formula or the “higher-of” would be exactly the same.

The February Class I base price, along with advanced Class III-IV skim milk prices used in the Class I mover, are released on Jan. 20.

The next USDA cold storage estimates, covering cheese and butter inventories at the end of December 2021, are released on Jan. 22. The USDA releases December 2021 milk production estimates on Jan. 24. The December Dairy Margin Coverage (DMC) program margin and potential indemnity payments are announced on Jan. 31.