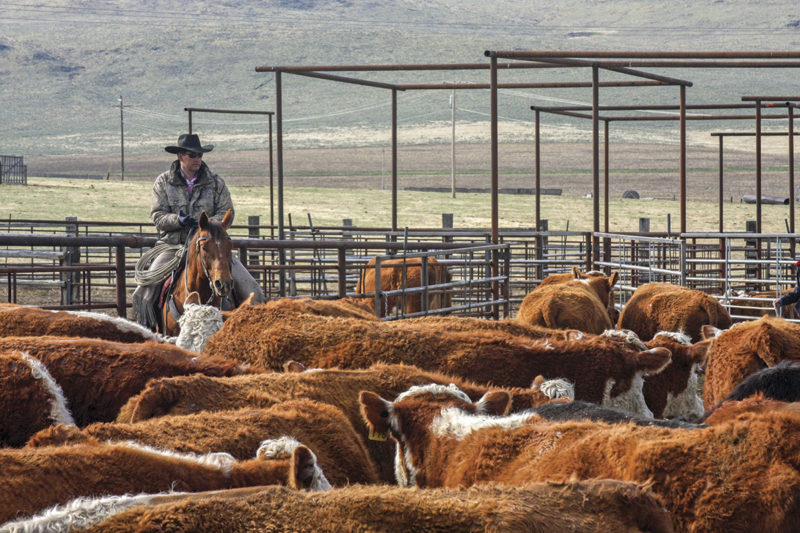 The decision of which cows to cull can depend on how a rancher plans to market them.

A lot of producers may not give much thought to the value of cull cows, but they can represent a sizable chunk of a cow-calf operation’s revenue. Careful consideration should be made as to how they are marketed.

Part of every cattle operation’s annual income is from cull cows; older cows or poor-producing cows are sold to make room in the herd for younger or better replacements. When expenses increase or feed supplies are short, cattle producers often sell more cows or heifers in order to generate enough income to pay the bills and have fewer cattle to feed. How and when cull animals are marketed can make a difference.

Derrell Peel, an extension livestock marketing specialist at Oklahoma State University, says many ranchers in Western states have been culling heavily the past 15 months because of drought. “Whether facing unplanned/unanticipated culling or normal culling, the more you can think ahead, the more chance you could potentially get a better price for those cows,” he says.

Many producers don’t give much thought to the value of cull cows. “It varies from year to year,” Peel says, “but typically culled breeding stock represents 15 to 20 percent of the revenue from a cow-calf operation.”

David Anderson, an extension economist with Texas A&M University, says there is a definite seasonality to cull cow prices. “We see lowest prices in the fall since most ranchers calve in the spring and wean in the fall, flooding the market with cull cows,” he says. “One strategy – especially in Southern regions – is holding those cows over winter to take advantage of the price increase from October-November to March-April of next year.”

If you typically sell cows in the fall, some years it may be worth putting feed into those cows to put more weight on them until the price strengthens again.

“If they’ve done their job and come in thin after you wean calves, it may pay to feed them a while,” says Peel. “Even as little as 45 days, but generally 60 days after the calf is weaned, most cows will gain weight and the price will go up. If they started out thin and get back to average flesh, they will look better as a slaughter cow and bring a higher price because they will be higher-dressing.”

That may not work, however, if weather is cold and feed is short and/or expensive.

And if cows are in good body condition already – maybe a cow that isn’t milking as much and keeping all the groceries herself, or one that lost a calf – it may not be worth hanging on to her. She already has the extra weight and will bring a better price than a thin cow. If you are short on feed, you won’t want to keep her because a mature cow eats a lot compared to a yearling.

Another strategy is culling earlier, before the price drops. A person can wean calves earlier and sell in August or September.

“This may be easier said than done, depending on when we calve, wean or preg check,” says Anderson. It may also depend on when ranchers round up cattle from range allotments shared with other ranchers.

“One thing we are lucky with this year is that cull cow prices have stayed high, in spite of extensive culling,” Anderson says. “There’s still big demand for hamburger beef. With inflation and costs going up, and most folks on a budget, in the wholesale beef market steak prices are down but ground beef has stayed high,” though it’s still less expensive per pound.

“This helps our cull cow market and producers who’ve had to make drought-forced culling decisions,” Anderson continues. There are various ways to market those cows, depending on whether you are close to an auction yard or can sell them on the rail. If you are close enough to sell direct to a kill plant, net price is usually better. Sometimes, with high fuel costs, it pays well if you can deliver the cattle yourself and have enough cows to make a load rather than just a handful of cows.

The cow market is a year-by-year thing, and a person needs to be flexible and innovative. If you decide to hold on to them, maybe there’s likely an alternative feed that would pencil out to feed those cows, if your own feed resources are short.

“Maybe you are in an area where there are byproducts from food processing, like potatoes or gin trash in cotton country,” says Anderson. There might be something you could economically feed cows until prices rebound, if you can get the feed to your cows.

“You have to consider the risk of keeping some of those cows, especially an older cow that might not make it through winter or might become lamer from arthritis in cold weather. It depends on the reasons you are culling those cows to begin with,” Anderson says. There may be good reason to not winter them again.

“Sometimes we can’t avoid that low price,” Anderson says. “But in most instances, we can, if we can find an alternative that pencils out.”

One rancher sold healthy, middle-aged open cows into an embryo program to be used as recipients and got a better price. You might sell late calvers to someone who calves later in the year. Every year is different, however, and culling decisions hinge on various factors.