Many significant things have occurred in the dairy industry during my lifetime. High on top of my list is the phenomenal increase in U.S. cheese consumption. In 1950, per-capita cheese consumption was 7.7 pounds. In 2012, the most recent data available, per-capita consumption of cheese was about 33.5 pounds. A person today, compared to 62 years ago, is eating 25 pounds more cheese per year. 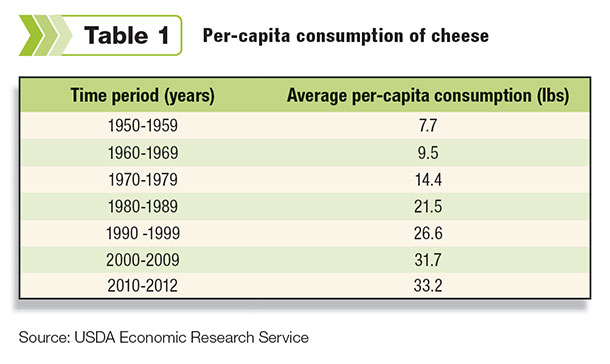 Cheese varieties
The varieties of cheese consumed have changed over time. See Figure 1 . In 1970, over 60 percent of the cheese consumed was American styles – cheddar, colby, Monterey Jack and stirred curd (used to make American cheese). Italian cheese was about 18 percent of total cheese production. Swiss was about 8 percent, and the other varieties (brick, Muenster, cream, blue and Hispanic) about 14 percent.

Why people are eating more cheese
Let me share four primary reasons for increased cheese consumption. First on my list is the increase in meals eaten away from home compared to 30 or 40 years ago, plus the prepared meals purchased or brought home to eat.

Think of all the cheese used by fast food and casual dining restaurants. Consider all the pizza picked up or delivered to eat at home. Increased pizza consumption is the driving force behind per-capita consumption of Italian cheese going up over 600 percent from 1970 to 2012.

As I tell people, home delivery of fluid milk is a thing of the past for most consumers, but it was replaced by home delivery of milk in another form: pizza. Consumers today prefer “eating” their milk versus drinking it.

A convenient, tasteful, nutrient-dense form of nutrition is the second reason for higher consumption. Cheese is easy to eat; no cooking is required. Just cut off a piece or peel off a slice, and eat it. Today’s consumer wants food that is convenient with good nutrition and taste.

Cheese has it all. Hats off to today’s cheese industry for continuing to improve technology and procedures to manufacture a consistently high-quality cheese. Plus, the large number of varieties of cheese offer a wide range of tastes from sharp to mild to nutty to hot and spicy. Consumers like choice and variety.

The third reason is versatility. There is almost an unlimited number of ways cheese can be used. It can be eaten alone, used in cooking a variety of foods, shredded on salad or soup, used to transform a hamburger into a cheeseburger, part of many sandwiches or its own sandwich, or melted on nachos.

It is estimated about one-half of the cheese manufactured is used as an ingredient in other products versus eaten alone. Research and development into new uses for cheese continues. Thirty years ago, who would have thought a leading breakfast meal would be a slice of cheese with an egg and bacon piled on an English muffin?

My fourth reason is the consumer focus of the cheese industry. When I was growing up in the mountains of North Carolina, there were only three ways to buy cheese: Cut a chunk off a waxed hoop at the country store, wrapped up in a package of American slices or processed in the form of Velveeta, which came in a box.

Today the varieties and styles available for consumers are in the hundreds, and the number keeps growing. Besides all the varieties, the cheese industry has and continues to work to make cheese appealing and consumer-friendly as possible.

Go into most any retail grocery store and you can purchase cheese in a chunk, 8-ounce package, sliced, shredded, or the deli or cheese center will weigh out the amount you need. Cheese now comes in more easily opened and re-sealable packages. It is displayed in stores on peg boards so consumers can easily choose the variety they desire.

Add to those factors improving economies and household incomes, both in the U.S. and other countries, means higher cheese consumption as well. During the past 10 years, the annual increase in per-capita cheese consumption is about 1 percent. Let’s assume this continues for the next 16 years.

Then in 2030, per-capita cheese consumption would be close to 40 pounds. Forty pounds of cheese may seem high to some, but many European countries are well over that today, with the French consuming more than 50 pounds and the Greeks about 68 pounds.

This projected increase does not take into account the growing exports of U.S. cheese. As the standard of living improves in developing counties, cheese demand will increase in those countries as well. U.S. cheese manufacturers will help meet this demand.