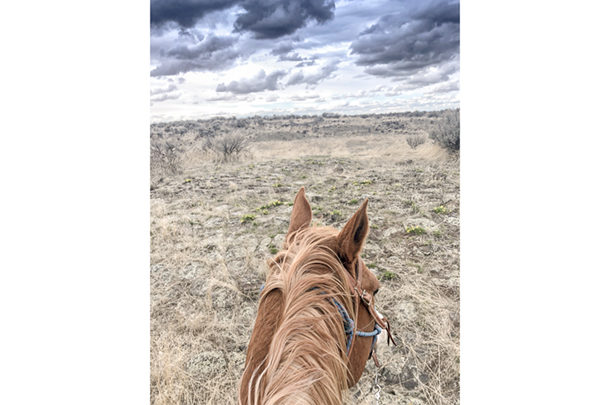 Pretty OK on a horse

I let my tentative grip of the reins go and grabbed the saddle horn with both hands. “Whoa, girl.” I righted myself and grabbed hold of the reins again. I pulled back hard, and she slowed down to a walk and then stopped. Looking around to make sure no one saw, I adjusted the saddle by standing up in my stirrups and putting my weight on one side and then the other. I straightened my hat and put my phone in a secure pocket. After I accomplished this dance, I took a deep breath and clicked her into a walk to find the cattle I was supposed to be bringing in.

Every time I ride a horse with any amount of go, we play this game. I still can’t seem to gallop without losing my seat with the initial change up. I view this with a level of shame, because people know I grew up with horses. My dad kept his horses, and we always had a kid horse, though he was seldom used. The horses were used for backcountry hunting trips (that I didn’t participate in) and for occasional pasture rides. Our horses predated our cattle, and they were never used in conjunction with each other. We were ranchers who had horses who preferred to work cattle on four-wheelers.

Anyway, our kid horse was named Curly. He was a small buckskin well into his teenage years with a mane that fit his name. In one of my few riding lessons, my dad encouraged me to get Curly moving into a trot. I nudged him with my heels and clicked at him. No change. I tried it again. He sped up momentarily before resuming his meandering pace. This display repeated itself every time I got on Curly. I assumed that’s how horses were.

It wasn’t until I was a teenager on a friend’s ranch that I experienced what I thought was a gallop and what she called a lope. They had me on an older grey gelding with a pair of roping reins. I nudged the grey gelding with what I thought was an appropriate amount of force, and he took off across the desert. Back then, I didn’t have the wherewithal to do anything but grab the saddle horn and try to stay atop. My friend was laughing, and her brothers were chuckling behind their gloves.

“Erica, I thought you said you could ride.” I thought I could ride a horse, too. I had convinced myself I was pretty OK on a horse. That day proved otherwise. As embarrassed as I was, I learned more on a horse in one day on that gelding than I had learned in all the lessons on the back of the kid horse, Curly.

Years went by, and my riding abilities didn’t improve. When people asked if I could ride, I responded that I had grown up around horses. I didn’t elaborate unless they asked. Then as a grown adult woman, my rarely-rode-a-horse husband purchased our 5-year-old daughter a Welsh pony. Before I knew it, he’d also bought two quarter horses and another pony. We were a horse family, and my rarely-rode-a-horse husband was mounted on his horse like he was born there. He now presumes to give me tips. Although I act offended, I do need them.

Our cattle predate our horses, and we find every opportunity to use them in conjunction with each other, although our ranching partner still professes to prefer his Honda. He secretly displays his preference by arriving an hour late when moving cattle when he knows there will be no need to unload. As for my riding skills, I am getting a bit better every time I saddle up, and if I can get out of my head, I think, one day, I’ll make a fine horsewoman.

During these unprecedented times, I’d encourage you to spend some time on the back of a horse or out with your cattle – preferably both, if you can, even if you are only a mediocre horseperson, like me. The market reports are stressful, the news is discouraging and social media is, well, social media. I believe there is something healing in animals, even if they only distract our mind for a time. Meetings, school and church are canceled, but horse rides, calving season and springtime are still very much in session.

PHOTO: This pretty-OK horsewoman finds a bit of sanity between her horse's ears. Photo by Erica Louder.