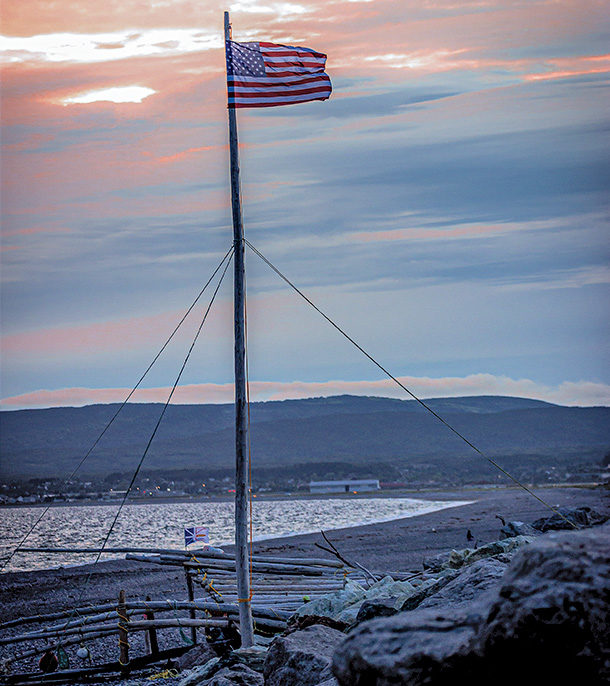 Just dropping by... Standing for the flag

I am always dismayed when I see professional team players kneel for the flag. I wonder if they really understand how much they are dishonoring themselves and the fallen heroes of our county.

Many years ago, I taught social studies to a group of energetic seventh graders. Every morning that academic year, we had a patriotic moment. We saluted the flag, sang a song and had a patriotic thought given by one of the students. At the beginning of the year, I gave the students the option of not participating if their religious beliefs prohibited demonstration of patriotism. No one declined, so I assumed all the students came from families who believed that America was the greatest country in the world.

Despite my happy expectations of glorious displays of respect and patriotism, one day, one of the restless ringleaders of the class decided that she did not want to participate in the Pledge of Allegiance. Let’s call her Sally. She decided that pledging the flag was not her “thing.” With a haughty flip of her hair and an air of you-can’t-make-me attitude, she left the room. When the patriotic moment was over, she returned to class and plopped down in her chair with a smug, just-try-to-change-my-mind look of defiance.

I knew Sally was making a statement just to get a rise from her classmates and me. I knew from experience with junior high students, if I challenged her in front of the class, there would be a chorus of students come to her aid. The argument would not be logical, or follow a coherent pattern, but there would be lots of passionate emotion and martyrs falling to the cause of civil rights. Before the day was over, there would be a delegation of seventh graders forming in the office to let the principal know that Mrs. Tenney was infringing on the rights of her students to be Americans. The battle would overflow the office and end up in the homes of the parents, who with a distorted vision of the entire issue would tie up the phone lines and invade the quiet peace of the school for the next two weeks. With those consequences looming heavily about me, I took a deep breath and said, “Take out your book and turn to page 103.”

There was a look of deflated wonder in her eyes as she reached under her desk and fumbled for her book. The incident was over for Sally in a few minutes, but for me it was just beginning. How was I going to reach her? How would I help her to have the vision of America that I had? How would I help her and the other students realize what a fragile, delicate blessing freedom is? Freedom has a price tag, and indifference is never payment enough to buy it. Once freedom belongs to a country, there is a grave responsibility to keep and cherish it for others to enjoy. If liberty is taken lightly, it will be stolen, and only the horrors of war will bring it back. I watched Sally stare at her book as I gave the assignment, and I wondered what she was thinking. My anger subsided as I remembered how young and inexperienced she was. How could she know? She was just a rebel teenager trying to find her way in a very confusing world.

I prayed silently that Sally and I would have a time and the spirit of camaraderie to talk about this sacred issue before she drew other students into the trap.

I pondered the subject all day. I thought I would talk to her about the Revolutionary War, George Washington crossing the Delaware and the terrible winter at Valley Forge. I knew what it is like to be cold in the middle of the night in winter, but I had never been wet and cold at the same time, and I didn’t have an enemy wanting to kill me. I doubted that she had ever been freezing cold or missed eating for any length of time. She couldn’t relate.

I could tell her of all the white crosses standing as silent sentinels over thousands of unknown graves in remembrance of the Civil War. I could tell her that under each of those crosses lay a soldier who once had a mother, father, brothers and sisters. Some of them had wives and children. Each of them was once warm and loved life. Each had dreams and hopes that would never be fulfilled. I wasn’t sure Sally would relate to that either.

I thought of Pearl Harbor and the hundreds sleeping in watery graves because someone wanted to take away liberty. I thought of Hitler and the Jews and thousands who died in Hiroshima. Some of the causalities were women and children who had never heard of Pearl Harbor. War is a terrible price to pay for freedom.

I thought of my own father who spent two years in England serving his country. My older sister was nearly two when he came home. He missed so much. I thought of others who weren’t so lucky as to return home. Every one of them would have used their own wounded dying bodies as a shield to keep the Star-Spangled Banner from falling to the earth in disgrace. How could I tell Sally these things without grabbing her, shaking her and screaming in fury, “Sally, you have no right to trample on the flag they died to save!”

I took a deep breath. I couldn’t talk to her just yet. I had to get my passion under control. I thought of Francis Scott Key sitting in the bottom of a ship penning the words to “The Star-Spangled Banner.” The vivid images he painted with his words make me shiver.

Oh, say can you see by the dawn’s early light
What so proudly we hail at the twilight’s last gleaming?

Is that flag still flying? I thought of the riots in the 60s and the burning of the flag by those who opposed the draft during the Vietnam War. I thought of the soldiers who died in the rice patties and those who suffer today from that terrible ordeal. I thought of Desert Storm. Is our flag still flying over “the land of the free and the home of the brave?” I thought of dishonorable political leaders who shame the cause of freedom. Through it all, our flag is the same flag that flew over battlefields. It is the same flag that drapes the coffins of veterans and heroes. It deserves to be honored and shown allegiance. I had to talk to Sally.

The Lord paved the way in answer to my prayer. That afternoon, Sally was alone on the playground. I walked up to her and smiled. “Sally, I want to talk to you,” I said softly. She stiffened a little, but I smiled again. “Sally, I don’t think you really understand what you were doing this morning when you didn’t salute the flag. Many people died in wars...”

She cut me off. “My grandfather died in World War II.”

I said, “Did you know he died to save that flag?”

She shook her head slowly as she stared at the ground.

“What do you think your grandfather would say if he saw that you didn’t salute the flag? Do you think he would be proud?”

Tears welled up in her eyes. “I didn’t think about that, Mrs. Tenney. I’m sorry.”

The next day, Sally stood to salute the flag. She stood a little taller and said the words more clearly. I could see in her eyes that her soul was filled with the thought: “My grandpa died to save that flag. I will make him proud of me.”

I stood a little taller too, and made some commitments. I would teach so that none of my students could ever say: “I didn’t think about that.” I want the young people of America to know that the price has been paid, but the battle is not over. Every person in America must stand up and be counted a patriot or we will find ourselves groveling to another form of government. The Star-Spangled Banner must always wave proudly over “the land of the free and the home of the brave.”

Yevet Crandell Tenney is a Christian columnist who loves American values and traditions. She writes about faith, family and freedom.