The genetic code for all of life is written using just four letters: A,G, C and T. Armed with a powerful gene-editing tool known as CRISPR, humans can now erase and rewrite small segments of this code to generate big impacts in scientific fields from medicine to agriculture.

CRISPRs, or clustered regularly interspaced short palindromic repeats, are a key component of bacterial immune systems. The string of DNA sequences and spacers work like genetic fingerprints for bacterial viruses.

When attacked, bacteria create double-stranded breaks in their own genome and insert DNA from a previously unseen virus, making it easier for the bacteria to identify and perpetrate dangerous offenders in the future.

Since describing this natural mechanism in the late 90s, researchers have begun to explore how editing a variety of genes in multiple species can address issues in human health, crop production and animal breeding. In the dairy industry, scientists are using the technology to address animal welfare and food security issues.

“In the same way that spell-check identifies and corrects single-letter errors in a word or grammar errors in a sentence, gene editing can be used to identify and change the letters that make up the genetic code within an individual,” wrote Alison Van Eenennaam, an animal genomics and biotechnology cooperative extension specialist for the University of California – Davis Department of Animal Science, in an eXtension article published in 2015.

How is this done?

In both cases, the next step is gene editing. By introducing molecular scissors, like those used by bacteria, into the cell culture or embryo, scientists can create double-stranded breaks at specific locations in the genetic code. 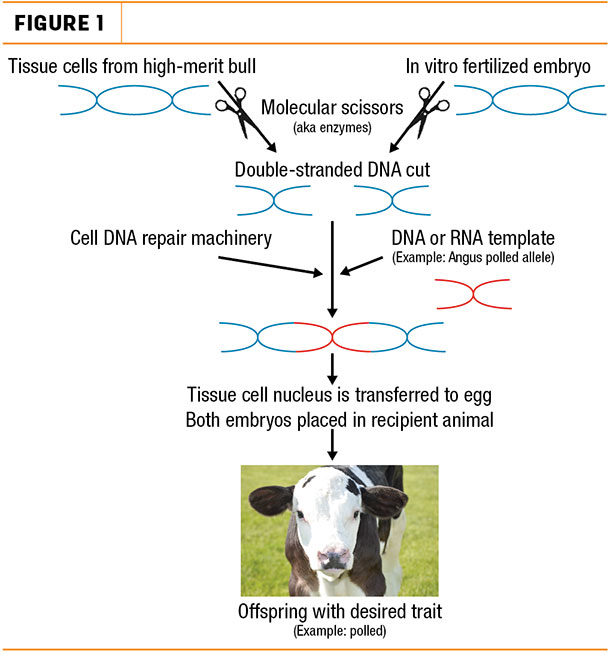 If scientists add a DNA or RNA template with ends that match those of the cut sequence, then this patch is sewn to the frayed ends of the genome, directing an exact repair for the DNA sequence of choice.

In effect, CRISPR/Cas 9 techniques allow researchers to knock out, repair or swap alleles – versions of a specific gene – while all other portions of the genome remain untouched, Van Eenennaam explains during a recent interview with Progressive Dairyman.

Although there are other gene-editing techniques that will also make double-stranded DNA breaks, the CRISPR reagents are more accessible, affordable and easy to use, Eenennaam says.

Once the desired trait is edited, the DNA of the tissue cell is transferred to an egg. Then, both types of embryos can be implanted into a recipient cow.

After 283 days, a calf with the desired trait is born.

“The advantage of gene editing over conventional selection to move these naturally occurring alleles from one animal to another, is that favorable alleles rarely all occur in one single individual and editing offers the opportunity to increase the frequency of desirable alleles in an individual or a breed more rapidly than could occur through conventional breeding,” wrote Van Eenennaam in the eXtension article introduced previously.

In fact, researchers from the Roslin Institute and Royal School of Veterinary Studies at the University of Edinburgh found that response to both genome selection and genome editing after 20 generations was up to four times greater than genome selection alone.

“I would say using genome selection and genome editing together in concert is the best of both worlds, because for some things there are so many different variants involved that you couldn’t edit them all at once to make the changes you want, so doing long-term selection is still valuable,” Sonstegard says.

Buri and Spotigy are two examples of what gene editing can accomplish. The Holstein bull calves, bred by Minnesota-based Recombinetics, arrived at UC Davis last December.

Van Eenennaam and her colleagues are monitoring the calves to ensure all of their physical and physiological characteristics are the same as other Holsteins with one important exception: They will remain hornless.

Using the methods described above, Recombinetics cut out the horned allele and substituted it with the polled allele observed in Angus. Because the rest of the DNA sequence is left unaltered, gene editing is the only way Holsteins could be polled without losing genetic merit, Van Eenennaam says.

Additionally, the polled allele is dominant, so only one copy needs to be passed on to offspring for them to be hornless. Since the calves each have two copies, all of their descendants should be polled, Sonstegard says.

For this reason, Eenennaam calls the process “a gift that keeps on giving.”

“Any genetic solution to a problem like this is even better than any chemical solution or physical solution,” she said.

UC Davis teamed up with Cornell Alliance for Science to create an outreach video that demonstrates the importance of this discovery in improving animal welfare. It shows the typical disbudding process performed by a veterinarian with local anesthetic, explaining that gene editing is a painless way to achieve the same end.

“We are trying to do something to stop a procedure that neither the cow nor the producer enjoys,” Van Eenennaam says.

Sonstegard and his associates have studied three cattle breeds of European ancestry that successfully adapted to New World climates: Senepol, Limonero and Carora.

These Criollo breeds share similar characteristics attributed to the SLICK allele, including shorter, sparser hair and 20 percent larger sweat glands, Sonstegard says. Because of these traits, cattle with the SLICK mutation remain 1ºF to 2ºF (0.5 to 1°C) cooler, even when not under heat stress.

In order to obtain these genetic features in their Holsteins, some South American dairy producers have been back breeding their stock for more than 50 years to obtain Holsteins graded up above 90 percent but with the SLICK gene variant, Sonstegard says.

The result: A $550 difference per lactation and cows that can be rebred up to 30 days faster under tropical production conditions.

Using gene-editing techniques, this process can be accelerated. All it takes is removal of a small DNA segment from Holstein cells and introduction of the Senepol’s SLICK allele in a petri dish. Once again, because the allele is dominantly inherited, all subsequent generations should exhibit heat tolerance.

The process also avoids drops in production from cross-breeding with beef breeds like Senepols.

The use of A.I. by the dairy industry significantly decreases the frequency of genetic defects due to screening of young bulls that are candidates for semen collection, says Kent Weigel, chair of the University of Wisconsin – Madison’s Department of Dairy Science.

However, it does not completely eliminate the threat.

There are two different types of genetic diseases, explains Van Eenennaam – simple and complex ones. Simple diseases linked to a single gene could feasibly be repaired by gene editing while diseases that are linked to many genes, like mastitis, could not.

CRISPR has already demonstrated its potential in combating some global livestock diseases of significant economic importance. It was used to produce swine with resistance to porcine reproductive and respiratory syndrome virus as well as African swine fever.

While Buri and Spotigy hold great potential for improving animal welfare, it is still unclear whether they can enter the food chain, Van Eenennaam says.

In the GMO debate, semantics are important. While genetic modification introduces genes from an entirely different species of animal, plant or bacteria, gene editing swaps alleles between members of the same species.

“Our cows are still cows,” Recombinetics states on its website.

Double-stranded DNA breaks like those made artificially with CRISPR/Cas9 frequently occur by natural processes, such as exposure to UV radiation, Van Eenennaam says.

“Given that DNA is generally regarded as safe to consume, and that genome editing can be used to produce precise analogs of the naturally occurring mutations we routinely consume in conventionally bred plants and animals, there would appear to be no scientific or other logical reason to single out the ‘process’ of genome editing for onerous regulation,” wrote Eenennaam and colleagues in the correspondence section of Nature Biotechnology in May this year.

Earlier this year, USDA-APHIS stated that it will not regulate a variety of white mushroom which was altered using CRISPR/Cas9 to resist browning. The FDA has not yet commented about the regulation of gene-edited livestock, Van Eenennaam says.

Another consideration, given that CRISPR/Cas9 is widely accessible and relatively easy to apply with minimal training, is how to determine when a group has enough knowledge or justification to edit a particular gene, Weigel says.

Aside from federal regulations, outreach personnel like Van Eenennaam are seeking public approval for gene-editing. She believes that there is a large, silent majority that would accept the technology if given an explanation of the costs and benefits. However, these individuals are the hardest to reach.

“Let’s not let another technology slip out of our fingers because we use scary-sounding terminology,” Van Eenennaam says.

Holly Drankhan is a student at Michigan State University College of Veterinary Medicine.