Physical dehorning of dairy cattle is a standard practice to protect both human dairy workers and other animals from injury. However, it is not only costly for producers, but also painful and stressful for the animals. As a result, dehorning is currently facing increased public scrutiny as an animal welfare issue. Despite these factors, 94 percent of U.S. dairy cattle producers report routine dehorning.

Horns are inherited as an autosomal recessive trait, meaning that horned cattle have two copies (pp) of a recessive allele that results in horns. Naturally occurring dominant (P) alleles of the POLLED gene locus (specific position on the chromosome) are prevalent in beef cattle breeds such as Angus, and also exist at a low frequency in some dairy breeds. Inheriting a single copy of this P allele results in a hornless or polled animal. However, dairy animals carrying the dominant P polled allele(s) tend to have lower genetic merit (lifetime net merit [$NM]). Horns do not have a cause and effect relationship with dairy genetic merit; rather they happened to come along as genetic hitchhikers when selecting for elite dairy genetics.

The American Veterinary Medical Association (AVMA) has proposed using polled genetics as an alternative to dehorning. However, there are few polled dairy sires with high genetic merit for important economic indexes, so this approach has not been widely adopted. Figure 1 shows that animals carrying the P allele tend to have a lower NM$, meaning that daughters of polled sires will earn less over their lifetimes. 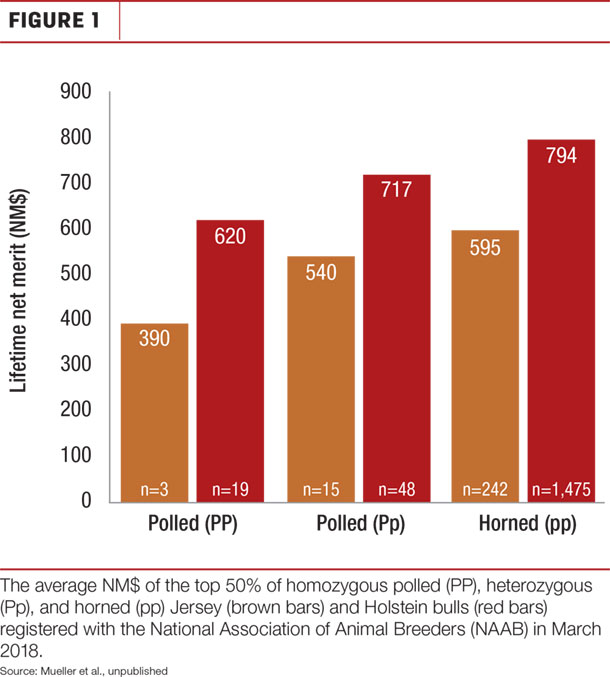 Gene editing has the potential to resolve these economic concerns by producing high genetic merit polled bulls, thereby eliminating the need for dehorning. Gene editing refers to a category of new tools that can be used to precisely edit or change the genetic code. It enables useful alleles to be introduced into elite germplasm without traditional crossbreeding. This often brings in a lot of undesired genetic information, known as “linkage drag,” which refers to all of the unwanted traits that come along with the desired allele when practicing traditional crossbreeding. Breeders then have to spend several generations breeding out the unwanted genetics while retaining the desired allele.

As the name “gene editing” suggests, these technologies enable researchers to add, delete or replace letters in the genetic code. In the same way that spell check identifies and corrects single letter errors in a word or grammar errors in a sentence, gene editing can be used to identify and change the letters that make up the genetic code (i.e., DNA) within an individual.

The currently available set of gene editors, known by acronyms such as ZFN (zinc finger nuclease), TALEN (transcription activator-like effector nuclease) and the trendy CRISPR (clustered regulatory interspersed short palindromic repeat)-Cas9 associated system, are effectively precise molecular scissors. They can be targeted to the POLLED locus that is responsible for horn development and used to replace 10 base pairs of the dairy “p” allele with 212 base pairs of the naturally-occurring “polled” P allele. This P allele sequence introduced by gene editing is exactly the same allele as that found in beef breeds, and when inherited it results in the polled or hornless phenotype in the resulting calves, making them genetically dehorned.

The edits can take place at the single-cell stage of embryogenesis (i.e., just after fertilization) (Figure 2) or in cell culture lines, which can then be cloned following confirmation that the intended edits have been successfully written into the genetic code. 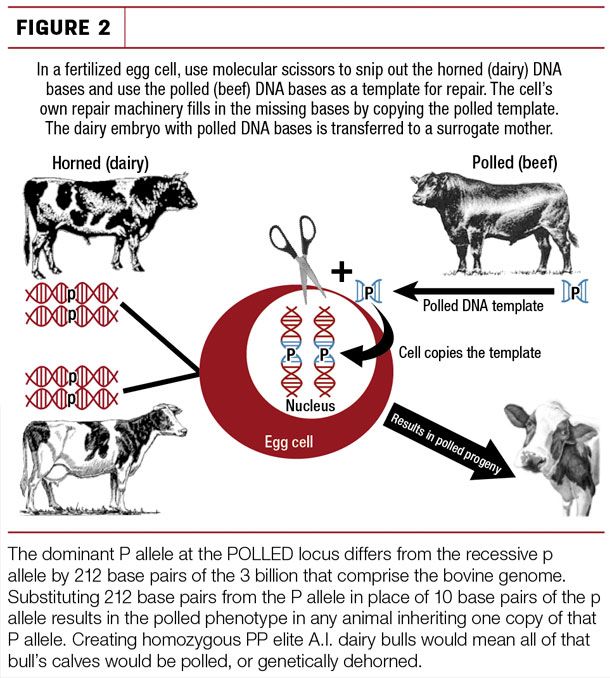 Given the extensive use of artificial insemination in the dairy industry, even if only a small proportion (1 percent) of elite A.I. sires were gene edited to be homozygous PP, the P allele could be rapidly disseminated into the dairy population while maintaining the rate of genetic gain. This would be superior to using existing polled genetics as recent simulation studies in both Holstein (Figure 3) and Jersey populations found that if existing homozygous polled sires were used exclusively, it would both slow the rate of genetic gain and dramatically increase inbreeding in both the Holstein and Jersey breeds. 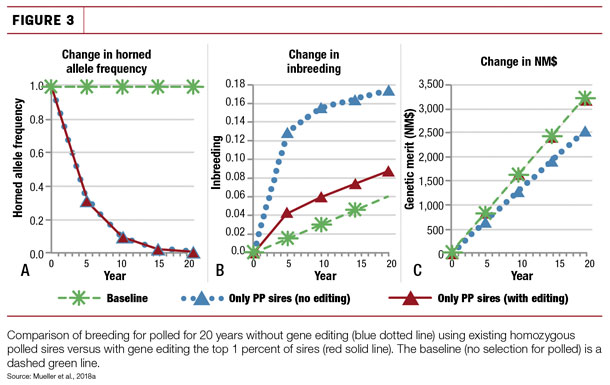 While there are many possibilities for gene editing in animal breeding, the regulatory status of animals carrying intentional gene edits, such as the P allele discussed above, is unclear. A 2017 draft of FDA guidance 187, Regulation of Intentionally Altered Genomic DNA in Animals, proposes that intentional genomic alterations, such as those introduced by gene editing, but not those introduced by selective breeding and random mutagenesis, will be subject to mandatory, multigenerational premarket “new animal drug” evaluation.

The FDA draft guidance specifies that additional “new animal drug” regulatory oversight will be triggered by intentional nucleotide insertions, substitutions or deletions introduced by gene editing. It further specified that in general, each specific genomic alteration will be considered to be a separate “drug” subject to new animal drug approval requirements, irrespective of the novelty of the alteration or the existence of any hazards in the resulting product.

This is diametrically opposed to the approach announced by the USDA on regulating gene-edited plants. In a March 28, 2018, press release, U.S. Secretary of Agriculture Sonny Perdue clarified that the USDA does not have any plans to additionally “regulate plants that could otherwise have been developed through traditional breeding techniques.” Historically, neither plant nor animal breeding have been formally regulated. Rather, U.S. law prohibits the commercial sale of unsafe food, irrespective of production method.

Other animal agriculture industries have voiced concern about the FDA draft guidance. In a position paper on “Regulation of Gene-Edited Animals,” the National Pork Producers Council (NPPC) wrote of the proposed FDA approach: “This regulatory path will result in a lengthy and expensive approval process, and functionally make any gene-edited animal a living animal drug – and every farm raising them a drug manufacturing facility. It does not allow for a risk-based approach that takes into consideration the familiarity or complexity of the genetic changes, and the fact that they could be achieved through conventional breeding techniques (though at the expense of time and genetic improvement from decades of animal breeding). The FDA approach is also out of step with the regulatory pathways under development in the rest of the world.”

The proposed FDA regulatory approach will introduce additional regulatory oversight on animals produced using gene editing that are no different to those that could have been obtained using conventional breeding. Unfortunately, lengthy process-based regulation triggered by human “intention” rather than novel product risk may effectively preclude animal breeders from employing gene editing to introduce beneficial genetic alterations like polled into our food animal populations.

Van Eenennaam originally presented this information at the 2018 Golden State Dairy Management Conference in Stockton, California, on March 29-30. Her presentation was entitled, "Use of Gene Editing to Introduce the Polled Trait."