For U.S. dairy farmers, 2017 started with lofty financial hopes. By the end of the year, productivity and income were up from 2016, but weakening prices had tempered those expectations.

An industry with an impact

(The USDA estimated about 1 billion pounds of milk were fed to calves or used at home in 2017, with calves fed 91 percent of this milk. Milk used on the farm was valued at $176 million in 2017.)

Among individual agricultural commodities, cash receipts from milk sales ranked fourth in 2017, behind only cattle ($66.5 billion), corn ($46.4 billion) and soybeans ($38.7 billion), according to data from the USDA. 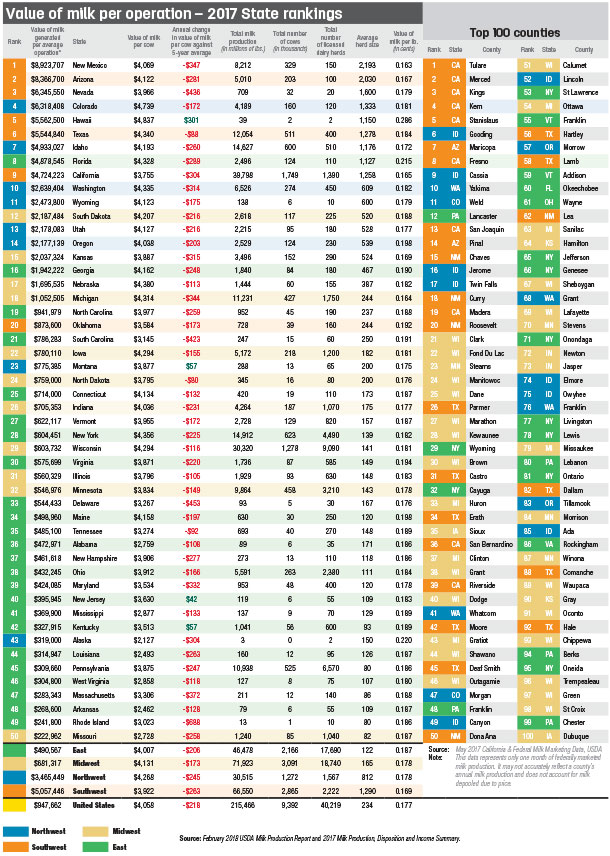 Click here or on the image above to view it at full size or in a new window.

Excluding Hawaii, the state seeing the highest value in annual milk production per cow in 2017 was Colorado, followed by Nebraska, New York and Texas. Wisconsin ranked 10th, Idaho was 12th, Pennsylvania was 29th, and California was 33rd.

With the largest average herd sizes, milk value per operation topped $8 million in New Mexico and Arizona. Among others, Colorado ranked fourth, Texas ranked sixth, Idaho was seventh, and California was ninth. With smaller average herd sizes, New York and Wisconsin ranked 28th and 29th, respectively, with Pennsylvania at 45th.

Prices and income levels are headed lower in 2018. As of late April, the USDA projected range in the all-milk price resulted in a forecasted average of $15.85 per hundredweight. With milk production expected to reach 219 billion pounds, that would yield total milk value of about $34.7 billion (down $3.4 billion from 2017 and about equal with 2016).