Since sugars are generally rapidly digestible, they can help the rumen microbes capture and use nitrogen.

Added sugar often increases milkfat percentage and/or milkfat yield. This may be because butyrate generated from sugar is used for milkfat synthesis. Also, if sugars moderate rumen pH, one would expect an improvement in milkfat percentage. Finally, sugars may promote the normal fatty acid biohydrogenation pathway, decreasing the amount of the trans-10 isomer of the 18:1 fatty acid implicated in milkfat depression.

It was recommended that dairy producers consider supplementing sugar in lactating dairy diets to achieve 6% to 8% diet sugar for optimum rumen function and performance. This would generally require 1.5 to 2 pounds of supplemental sugar per cow per day. Suggested optimal ranges (percent DM) for other nutrients include starch at 22% to 27%, soluble fiber at 6% to 8% and rumen-degradable protein (RDP) at 10% to 11%. 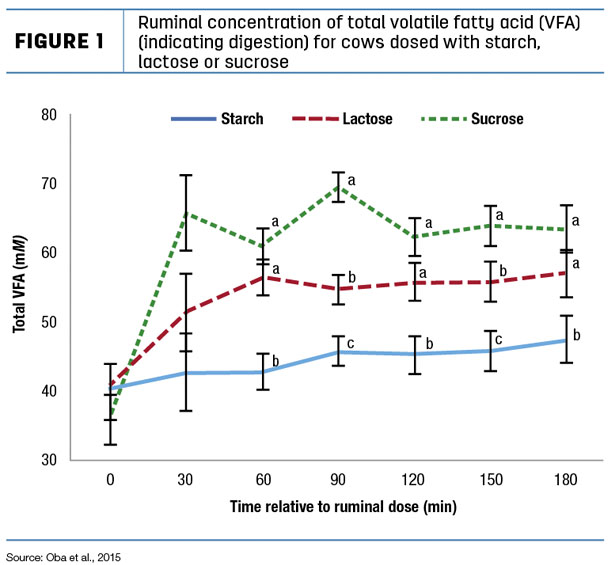 When either sucrose or lactose was substituted for starch in lactating cow diets (9% dietary sugar), both sugar sources similarly improved milk as well as milk component yields. Although lactose was digested at a slower rate than sucrose, cows still responded to lactose’s much higher rate of digestion versus starch.

Silages contain little of the sugar originally found in the harvested forage, but silages do contain some residual sugars from the breakdown of hemicelluloses in fiber. These five-carbon (pentose) sugars, including xylose, mannose and arabinose, have a much slower rate of fermentation than common supplemental six-carbon (hexose) sugars (glucose, fructose and galactose). Research at Cornell University found that rumen bacteria had slower growth on five-carbon sugars compared to six-carbon sugars.

Sugar alcohols include sorbitol and glycerol (a biodiesel byproduct). Unlike sugars, sugar alcohols are fermented primarily to propionate. Sugar alcohols can be used as a partial, alternative energy source for dairy cows and may also improve glucose status in transition cows.

Alternative energy sources should always be given consideration to save feed costs. However, productive benefits of supplemental sugars may justify a higher cost per ton or per unit of energy.