Improving conditions on both the income and cost side mean dairy farmers will be getting more money from markets and less from the new Dairy Margin Coverage (DMC) program.

However, the March 2019 margin was estimated at $8.85 per hundredweight (cwt), thanks to higher milk prices and steady feed prices (Table 1). That will yield a DMC indemnity payment of 65 cents per cwt on March milk production for those selecting the top coverage level at $9.50 per cwt, and just 15 cents per cwt at the $9 per cwt coverage level. The payments are also subject to a 6.2 percent sequestration deduction. 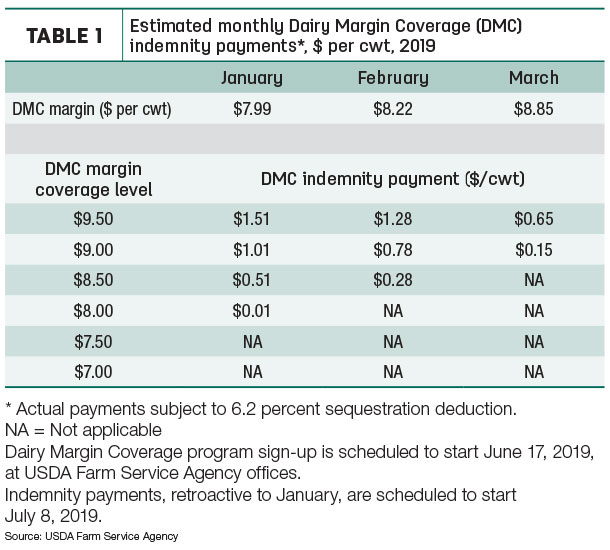 As we’ve seen in recent weeks, markets are changing. Earlier this year, DMC payments had been projected to extend into October. However, the increases in milk futures prices and declines in corn and soybean meal futures now push the forecasted monthly margin to $9.50 per cwt by June or July, halting monthly indemnity payments.

Enrollment in the DMC program will begin June 17 at the USDA Farm Service Agency offices. The April DMC margin will be announced May 31, so dairy producers will know expected payments for January-April 2019 before they sign up for the program. Distribution of indemnity payments, retroactive to January 2019, is scheduled to begin about July 8. 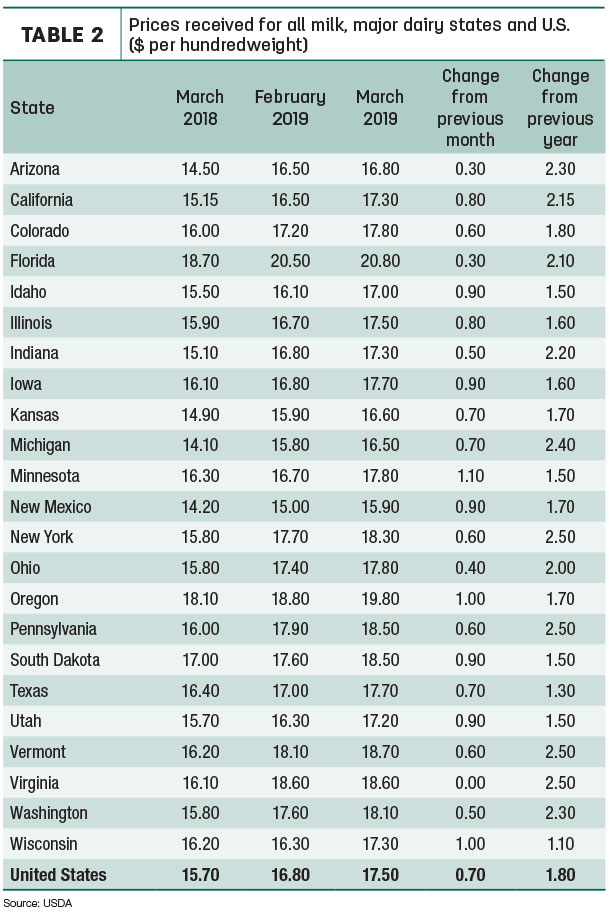 What if? New ‘dairy hay’ information

It’s only a “what if?” scenario, but if that average was incorporated into the DMC formula, the margin would have been 40 cents lower, or about $8.45 per cwt. That would have yielded a March 2019 DMC margin of $1.05 per cwt at the top margin coverage level of $9.50 per cwt. However, the new dairy-quality hay prices are not part of the DMC calculations.

The USDA has made a new web-based tool to help dairy producers evaluate coverage levels through DMC program by combining operation data and other key variables to calculate coverage needs based on price projections.

The decision tool assists producers with calculating total premiums costs and administrative fees associated with participation in DMC. It also forecasts payments that will be made during the coverage year.

A webinar, hosted by I-29 Moo University, will highlight DMC and another risk management program, the Dairy Revenue Protection (Dairy-RP) program, on May 17 beginning at noon (Central).

Bozic will outline developments in the Dairy-RP program and provide forecasts for the next year.

Compeer’s Newton, a crop insurance team leader, and Monger, a dairy industry specialist, will focus on Dairy-RP from a lender’s perspective. They’ll provide program results from the first quarter of 2019 and discuss how Dairy-RP can fit into an overall dairy risk management plan.