April 2019 proofs review: 10 years of genomics, current genetic trends and what new traits mean for you

Sophie Eaglen
2019 marks 10 years of genomic selection. Most livestock genetics conferences that are held this year will have a scientific seminar celebrating this milestone. It’s been a decade since our cattle genetic industry changed like this only once before – with the invention of A.I.
Sophie Eaglen

While there are people who support genomic selection and people who believe it was the end of a great era, its impact on the industry is undisputed.

When genomics was introduced, it was often referred to as a high-speed train. Geneticists warned the industry that you’d better be sure which direction you were heading. Otherwise, you would end up at the wrong destination so fast there would be no way back.

For all it’s worth, it feels like the high-speed train never stopped. For 10 years, it has been going at a very fast pace, and as an industry, we have been attempting to steer this train in a direction that benefits the U.S. dairy farmer and the global exporter, as well as the various breed associations.

So where does this leave us today? What are the current trends in U.S. cattle genetics? The April proofs showed yet more developments in genomic selection. What impact do they have on you as a dairy farmer? And what is the next hot topic?

What are you currently buying?

The National Association of Animal Breeders (NAAB) is a not-for-profit trade association. Where a collective voice is worth more than the individual (think of trade), the NAAB represents the U.S. A.I. industry. Ninety-five percent of U.S. bull studs and custom collection facilities report their domestic and global semen sales to NAAB. At the end of each year, NAAB publishes annual statistics which reflect the current state of affairs for both domestic sales and export accurately.

2018 has been a record year for U.S. genetics, with over 60 million units of semen sold for dairy and beef combined. But trends have changed and this reflects a different way of using semen.

Domestic sales of dairy units have decreased by 5.7 percent, while the total growth mainly stems from a 59 percent increase of domestic beef sales, as well as a 11.4 percent growth in exports. This reflects two trends in the current market:

NAAB also records unit sales by breed. Holstein remains the largest breed by far at 86 percent, followed by Jersey at 10 percent and Red and White Holstein taking over third place from Brown Swiss at just over 1 percent. But there has been another growing trend in 2018.

Crossbred genomic evaluations – what does this mean for you?

For the first time in many years, both the Holstein and Jersey breed had to give up part of their market share to some still small, yet fast-growing, breeds. The breeds with the most rapid growth were Montbeliarde and the dairy crossbred.

Although most crossbred bulls are Holstein-Jersey, crossbreeding in general has been gaining popularity. While recorded semen sales from crossbred bulls – most often Holstein-Jersey – are still less than 1 percent of all semen used in the U.S., nearly 70,000 genotypes from crossbred females and males combined have been submitted for a genomic evaluation to the Council of Dairy Cattle Breeding (CDCB). The CDCB is responsible for the national genetic evaluation of all dairy animals.

Since the arrival of genomic testing, CDCB has been receiving staggering numbers of genotypes from young females, including crossbreds. The graphs shown here (Figures 1 and 2) demonstrate the rapid growth of number of female Holstein and Jersey genotypes entering the monthly evaluations since 2009. Previously, dairy producers submitting genotypes from crossbred animals would not receive a test result because it’s difficult to produce a genomic breeding value for a crossbred animal. The main reason for this is that it is far from trivial to trace from which breed a DNA segment stems and, consequently, to estimate which effect that DNA segment has on the performance of that crossbred animal. 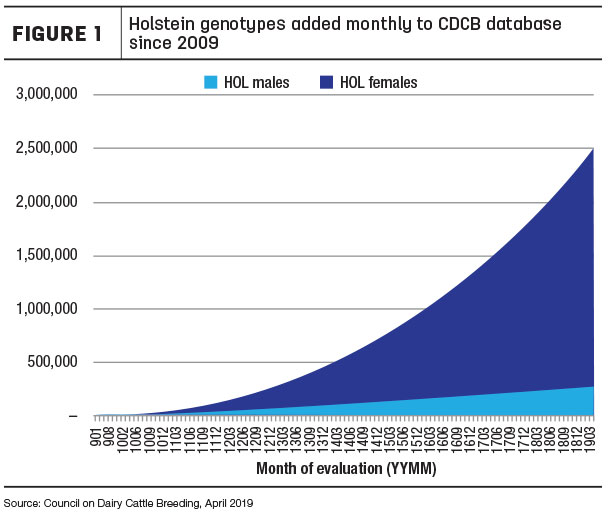 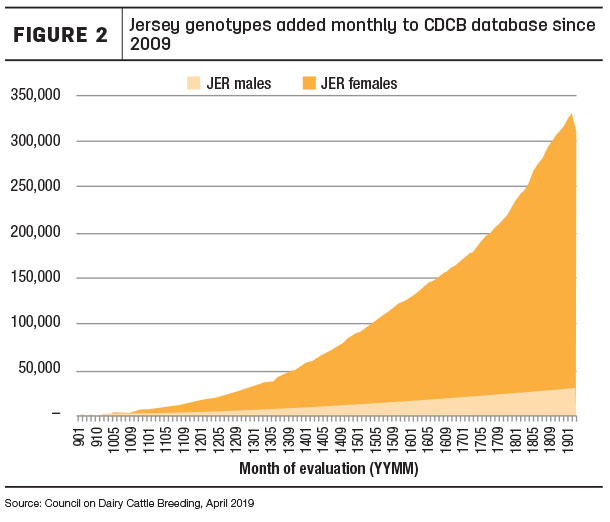 Over the last two years, CDCB, in collaboration with researchers from the USDA/Animal Genomics and Improvement Laboratory (AGIL), has developed a method that computes genomic breeding values for crossbred animals with good accuracy. In doing so, the U.S. is the first country to offer a genomic evaluation for crossbred dairy animals. But what does that mean for you?

1. You can now receive genomic predicted transmitting abilities (PTAs) on a crossbred animal through a genomic test. That means you can purposefully buy a genomic test for an animal you know is crossbred, but you also will receive a test result when your animal turns out to be crossbred. Previously, the animal would receive a breed conflict error if it was more than 10 percent of a different breed than suggested.

Be aware that the crossbred evaluations are currently only for animals that are crosses of the five main breeds: Holstein, Jersey, Brown Swiss, Guernsey or Ayrshire. Thus, a pro-cross animal (Scandinavian Red and White-Montbeliard-Holstein) or a Holstein-Fleckvieh for example, cannot currently receive a genomic evaluation. If you have been actively genomic testing, you should retrospectively receive the genomic breeding values on any crossbred animal you may have submitted through a genomic test.

An ever-increasing number of traits

Crossbred genomic evaluations were not the only new addition in the April proof. It was also the week in which yet another trait was added to the national evaluation: Early First Calving (EFC). Raising replacement animals is costly and EFC is therefore an economically important trait. The trait has an easy-to-understand scale in days where a positive number means an earlier first calving. However, EFC is the eighth trait added in the recent two years. Having so many traits available on both bulls and cows makes it difficult to see the forest for the trees. This is where indexes help. Whether it’s Lifetime Net Merit ($NM) (EFC will be included in $NM later this year) or your own index, it is always sensible to breed and mate according to an index.

If you find EFC an important trait for your herd, ask your genetic consultant to adjust your custom index to properly account for the trait. Or if you don’t have an index yet, ask your consultant to help you create one. Higher EFC is favorably related to Heifer Conception Rate (HCR) and Daughter Pregnancy Rate (DPR) but unfavorably related to stillbirth. Even though the heritability is low (2.8 percent) and genetic progress would therefore be relatively slow, it is still best practice to breed for EFC in an index to make sure your herd remains healthy while you reduce the age at first calving.

What is the next hot topic?

The widespread use of genomic selection has created a notion that we can derive the merit for every genetic trait simply by studying DNA. If that was the case, classification of females wouldn’t be necessary anymore, and we could all stop with milk recording. The truth is rather the opposite. To quote my former Ph.D. supervisor, “In the age of the genotype, the phenotype [performance] is king.”

As we expand application of genomic selection to more traits and increase our knowledge on the structure of DNA and how it affects the performance of our animals, we will need an increasing amount of performance data. Without knowing how animals perform in terms of production, fertility, health and type, we have no way of finding out how this performance connects to the animals’ DNA. The fewer farmers that milk record and classify, the more difficult it becomes to calculate accurate PTAs on bulls.

Thankfully, the amount of generated data is expanding exponentially. Every new sensor, milking equipment, on-farm management system and mobile app generates data. However, since the data is becoming more valuable, the discussion on who owns the data is getting more important as well.

The source of all the data that is collected is your dairy farm. Dairy producers will therefore be at the epicenter of this data discussion and will be faced with an increasing number of requests for their data. Likely, every request comes with a legal agreement which states where the data is going, who will own it and with who it can be shared. Make sure to read these agreements carefully and understand where your data is going and what its purpose will be.

Data can be compared to oil in the sense that it only has value when it flows. Keeping it contained defeats the purpose. The more data that’s shared and connected to other data sources, the higher the benefit to the national U.S. genetic evaluation and your herd’s profitability. Herd health data may tell you which animals need to be treated. However, health data from many U.S. farms connected to the genotypes of the animals will allow researchers to find specific DNA segments that predict innate genetic merit for better health. Think about it this way: It is not a coincidence that the ex-wife of Google’s CEO is now CEO of 23andMe, the human genomic testing company. Data is the future.

In the next 10 years, the focus will shift from genotype back to phenotype because these sources combined unlock great potential for further genetic improvement.

Our understanding of the genome will only get better, and our industry will undergo more changes to keep up with all the technological developments. As a dairy producer who is struggling with the ongoing low milk prices, genomics will provide more tools to increase your bottom line. It’s important to keep educating yourself about opportunities the next decade will provide to you but to also think about what you can contribute to the tools that will be created.

What data may you want to collect and share to create return on investment for your herd? It may seem like there is a jungle of companies trying to get your business using an increasing number of traits and tools all focused to give you genetic improvement. But at the end of the day, everything starts and stops with you. Be involved, and help steer the high-speed train of U.S. genetics to a future of sustainable, profitable dairy farming.