Michael F. Hutjens
With current low milk prices and negative profit margins, dairy farmers and bankers are asking nutritionists to reduce feed costs. On some farms, all feed additives have been removed, which may save 30 to 40 cents a day, but leads to reduced fertility, lower milk yield and components, and poorer health status.
Michael F. Hutjens

Unfortunately, minerals are also being removed to save money. This strategy has risks (Figure 1). 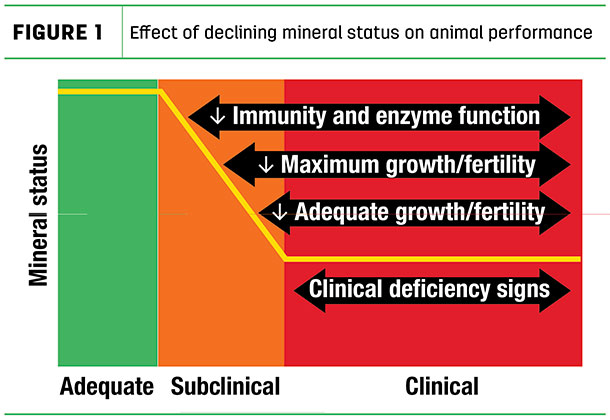 Figure 1 does not have mineral levels listed, but illustrates what may happen on the farm when minerals are reduced or removed. Mineral considerations are summarized below.

Rumen microbes have mineral requirements; these organisms can turn over or live for less than 20 minutes. Dairy cows also have mineral needs as listed in Tables 1 and 2. 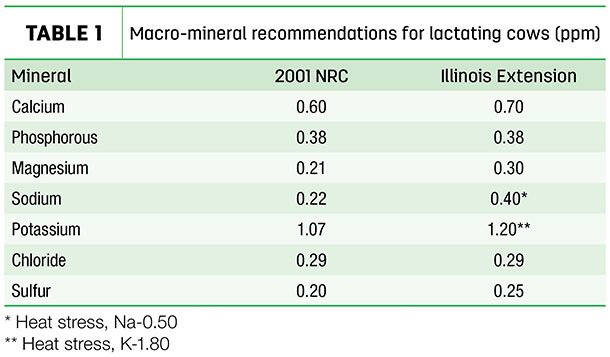 Mineral requirements can be related to milk yield including calcium, phosphorus and potassium. Other minerals are needed for fertility including phosphorus and selenium. Animal health and immunity can be impacted by zinc, selenium and chromium. The on-farm challenge is minerals can be removed from the ration while milk yield and heifer growth may not be influenced immediately, giving the impression minerals are not needed. Meanwhile, the animal reduces mineral storage levels in the bone, liver, blood and other organs.

The only mineral cows have a “true appetite” for is salt or sodium. Cows and other livestock will crave or search for sources of sodium or salt if the ration is deficient. Dairy cattle may lick urine as a source of sodium or salt. Sodium and chloride ration levels should be calculated to determine if adequate amounts are being force-fed (recommended approach).

Cows may need more sodium and potassium during heat stress (Table 1). Sodium and potassium may be removed in the close-up ration to reduce edema risks or development. Fresh cows may crave more electrolytes due to limited levels in the dry period and the loss of minerals during the calving process. One approach is to offer free-choice as an “add-on” program outlined below. Each product should be offered separately.

First choice: White salt offered as a block or loose free-choice for cattle craving sodium or salt. Trace mineral salt could be offered, but trace mineral balance and needs should be provided in the base ration (in the TMR or grain mixture). If cows average over 0.1 pound per cow per day of free-choice salt, monitoring which cows are actively or aggressively consuming salt is recommended.

Second choice: Sodium bentonite can also be offered free-choice to reduce soil consumption and improve the rumen environment. This mineral will swell up in the rumen and move out in the fluid phase (soil and sand may remain in the bottom of the rumen). Sodium bentonite can also bind mycotoxins. Free-choice consumption should be less than 0.25 pound per cow per day based on studies at the University of Minnesota.

Third choice: Sodium bicarbonate can be offered separately as the third free-choice mineral. Cows may consume the buffer free-choice, but free-choice systems should not replace the level force-fed (0.75 percent of the total ration dry matter). Research reports indicate cows do not crave buffer due to acidosis. But dairy farmers report higher intakes in fresh cows, cows under heat stress and increases in the milkfat test.

On larger dairy farms, minerals can be added to the water source before adding it to the total mixed ration or in the drinking water (more common in beef herds). Solubility of minerals is important, along with adequate mixing of the water-containing mineral in the TMR unit. Metering equipment may be provided if you purchase the minerals through the company providing the equipment. Feed additives can also be metered with this approach. Adding minerals though a molasses-based liquid feed can also be considered.

Commercial products are available in the marketplace that allow the dairy farmer to inject trace minerals. The approach is to “top off” the current or traditional mineral programs being fed. Injecting trace minerals allows the dairy farmer to inject during critical time periods (prior to dry-off for mastitis reduction during the dry period), prior to calving (to improve health and immunity) and six to eight weeks after calving to increase fertility based on studies at Cornell University. These products can be effective under mycotoxin stress conditions based on studies at the University of Illinois.