To seal or not to seal?

Mastitis has a large economic impact on a dairy producer’s bottom line. Research indicates the direct and indirect costs, which include veterinary, discarded milk, extra labor, cow mortality, repeat cases and milk losses, amount to $1.7 - $2 billion per year.1Preventive protocols are the best option to curb 50-60% of all new cases that occur during the dry period.2Dry cow antibiotic therapy has been the most widely used method until recently. With the movement to reduce antibiotic use and regulations preventing organic dairy farms to use dry cow antibiotic therapy, teat sealants have been added to protocols or even used exclusively.

Why add a teat sealant to a dry cow antibiotic therapy?

Understanding the three physical barriers of a cow’s mammary system along with the three stages of the dry period can help producers make a fact-based decision on whether to add a teat sealant to a dry cow protocol.

The streak canal, teat sphincter and keratin plug make up the three physical barriers that block or absorb bacteria that may penetrate a cow’s mammary system. 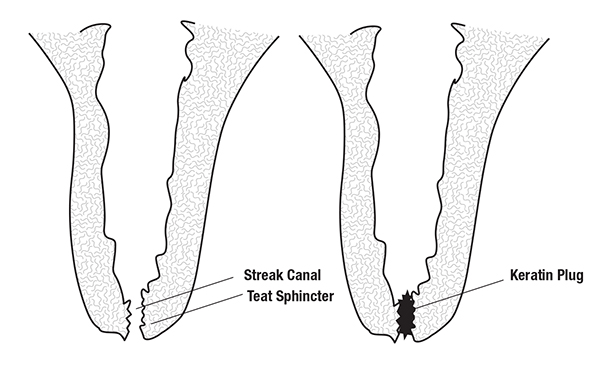 The streak canal is the primary line of defense. The streak canal has its own built-in defense mechanisms, such as physical closing of the entryway into the gland and the formation of a keratin plug to prevent entry of bacteria.

The teat sphincter, located in the teat wall, extends 2mm into the canal. It has no antibacterial activity, but rather contracts and shuts off the streak canal to create a physical obstruction to bacteria. Genetics can play a role in how quickly and tightly this smooth muscle closes off after milking. Clinical and subclinical milk fever can also impact time of closure, as low calcium and magnesium levels affect all smooth muscle contraction.

The keratin plug has two functions. It is a mesh-like substance formed by desquamated epithelial cells, fatty acids and cationic proteins. It functions as a physical obstruction and can also absorb bacteria. However, certain bacteria can survive and grow in the keratin plug. Secondly, it is bactericidal and bacteriostatic. It contains proteins that bind to and cause disintegration of gram-positive bacterial cell walls as well as compounds that inhibit the growth of bacteria.3 It is interesting to note that the fatty acid composition of the keratin plug is heritable.

Understanding the stages of the dry period

During the steady state there are no secretions of any kind. This allows the mammary system to recover and allow for maximum production. Shortening the dry period two weeks reduces future production. This is a lower-risk stage when it comes to new infections.

The final stage of the dry period, colostrogenesis, is when colostrum production and the start of lactation occurs. This period lasts around two weeks. New infections are likely to occur during this stage for three main reasons: 1) dry cow therapy is at a level below minimum inhibitory concentration; 2) the cow has a suppressed immune system; and 3) the keratin plug may break down or was never formed during involution.

Will a teat sealant make the difference?

When a teat sealant is deposited in the lower portion of the steak canal, it instantly mimics the keratin plug and seals off the teat for the entire dry period, blocking bacteria from entering the mammary system via the teat canal. It remains in the streak canal until it is manually stripped from the teat or a calf suckles the teat. Studies have shown the efficacy of a teat sealant used in conjunction with antibiotic dry cow therapy can reduce new dry cow infections at calving by 25%.5

What to look for in a teat sealant

Most internal teat sealants have the same key ingredients: bismuth subnitrate (a heavy metal used in the pharmaceutical industry) and a mineral oil base (viscous paste). The manufacturing process, type of tube used to administer the product and where it is manufactured sets UdderLife™ OptiShield™ teat sealant, available through GENEX, apart from the competition.

The type of tube and the manufacturing process make all the difference when it comes to keeping the teat sealant in the lower part of streak canal. Excess amounts of air in the tube can push the teat sealant further up into the streak canal and lower mammary system, requiring extra time for the teat sealant to completely clear. Teat sealants can clog milk filters and interfere with electronic switches in milking equipment.

Tubes with a tip that allow for a choice of full or partial insertion can push teat sealants up too far in the teat canal and require additional training for compliance and 100% consistency. Udder edema can also push the teat sealant above the streak canal and take longer to strip out.

The unique manufacturing process of UdderLife™ OptiShield™ teat sealant prevents large amounts of air in each tube. The tube design allows for escape of any additional air during administration, so the teat sealant stays in the lower portion of the streak canal. The tubes are also partial insertion only, so there is no confusion when it comes to administration and provides a more consistent delivery.

Furthermore, most teat sealant products are made overseas, which can present the challenge of waiting on a backordered product or the product not being available at all. UdderLife™ OptiShield™ teat sealant is the product of choice because it’s manufactured here in the USA.

Teat sealants are another tool to help cows block new dry cow mastitis cases and can increase profit to bottom lines. When considering any new dry cow therapy, it is best to consult with a team of professionals.

If adding a teat sealant to dry cow therapy, UdderLife™ OptiShield™ teat sealant from GENEX can help seal off those profit-robbing new cases of mastitis.