Albert De Vries and Joe Dalton
The following is a summary from the Dairy Genomics Workshop series on the value of genomic testing females, presented in Idaho, Washington, Florida, Texas and California in late 2018.
Albert Vries
Joe Dalton

The extension presentations were part of a large research and extension project sponsored by a grant from the USDA to improve fertility in dairy cattle.

The number of females that are genomic tested keeps growing. In December 2018, the Council on Dairy Cattle Breeding (CDCB) announced the three millionth genotype was uploaded since 2009 to the national cooperator database managed by CDCB. Approximately 90 percent of these genomic tests are for females. These females are overwhelmingly tested early in life.

Paying for a genomic test means buying information. Most genomic test results return predicted transmitting abilities (PTA) for a large number of genetic traits such as fat, protein, Daughter Pregnancy Rate, Productive Life and net merit. The reliabilities of these traits are much greater than when the PTAs are based on parent averages.

A higher reliability means we are more certain the PTA of an animal is close to its true genetic transmitting ability. Genomic test results also provide haplotypes for genetic conditions such as beta casein, polled or horned, and cholesterol deficiency, among others. Further, these tests identify animals that have a parent misidentified.

Information only has value if it improves your decisionmaking. Perhaps the most classical use of genomic test information is to help decide which heifers to raise if you have a surplus of heifers. For example, if we looked at a real herd of 2,000 genomic-tested heifers and culled the bottom 20 percent, the remaining top 80 percent (1,600 heifers) would have an average PTA net merit that was $52 greater than the average of all 2,000 heifers.

This increase of approximately $52 for the best 80 percent is approximately true for any herd that is genomic tested. The average increase of $52 in PTA of net merit translates to about $34 greater profit per cow per year once these heifers become cows (Figure 1). 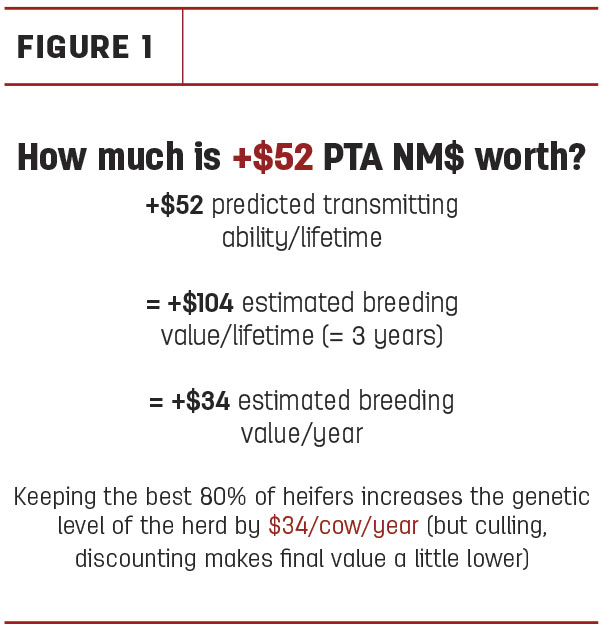 If genomic testing costs $45 per calf and all calves are tested, then culling more than approximately 10 percent results in a positive return on investment in genomic testing. This math assumes the price of the 10 percent surplus calves sold is not lowered because the buyer knows you are selling the calves with the worst genetics.

The math assumes we have no other way of sorting these heifers, but perhaps we could rank them based on parent averages of net merit for free. Because parent averages have a much lower reliability, the increase in net merit of the top 80 percent heifers is much lower than when genomic testing results are used to identify the best animals.

Does a surplus of heifer calves make sense?

The net value of genomic testing increases with a greater surplus of heifer calves, up to approximately 60 percent surplus calves. Surplus means heifers not needed to replace culled cows or for expansion. So we investigated if it made sense for a dairy to produce a greater number of surplus heifer calves through the use of sexed semen. The idea is that the value of genetic progress from selling a greater surplus of dairy calves might outweigh the cost of producing many surplus calves.

We put all these factors together and assumed a herd had decent reproductive performance and a 35 percent annual cow cull rate (Figure 2). 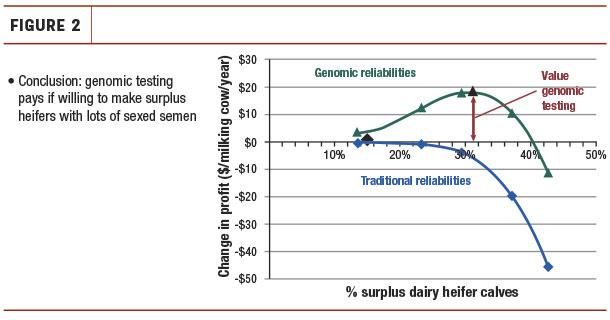 Surplus heifer calves were sold at the same price as bull calves. Our goal was to maximize herd profit. Without any sexed semen, this herd would make 13 percent surplus calves. Genomic testing to identify these 13 percent calves to cull barely paid for itself. However, heavy use of sexed semen in heifers and some in cows resulted in approximately 30 percent surplus calves.

Combined with genomic testing, profit increased by $18 per milking cow per year compared to the scenario where no sexed semen was used. Even greater use of sexed semen to make an even greater surplus of dairy calves reduced profit again, so the optimum in this case was about 30 percent surplus. Making 30 percent surplus dairy calves without genomic testing reduced profitability compared to no use of sexed semen. In this case, there was some genetic gain from selecting the bottom 30 percent of heifer calves to cull with a low parent average reliability, but the value of this genetic gain was less than the costs associated with the use of sexed semen to make a greater surplus of dairy calves.

We did some what-if calculations to see when we might expect a greater herd profitability as a result of the best combination of use of sexed semen and genomic testing. Genomic testing more quickly pays for itself if the herd has better reproductive performance, uses a genetic merit index that has greater variability and when the cow cull rate is lower. These factors result in greater genetic gain, and then, a higher reliability for selection has more value.

Response to selection was a major driver of the value of genomic testing. For example, the genetic theory says that for every pound of milk difference in genetic merit, we expect a pound of difference in the bulk tank, on average. This is a response of selection of 1.

We only briefly mentioned other factors during our extension talks. There are other uses of genomic testing that we have not included, such as fixing parent misidentification and avoiding inbreeding and bad matings. These by themselves do not pay for genomic testing, but they help. We also did not mention embryo transfer. When dairy heifer calf prices are low, it may be that waiting for test results costs so much in feeding and management that the genetic gain from selection is cancelled by the loss on the surplus calves sold.

We also discussed using beef semen to create crossbred calves instead of surplus dairy calves. Indeed, some scenarios showed this can be a more profitable strategy than creating surplus dairy calves. These scenarios have a combination of sexed semen in heifers and beef semen in cows, with some conventional semen. The value of genomic testing would be lower because test results would not be used to cull surplus calves, but only to identify which animals to breed with sexed semen.

Genomic testing has greater value when it improves your decision-making regarding which heifers to cull and how to breed your females. A high response to selection adds a lot of value, but there are also situations where genomic testing is not advisable.