What can be done to increase revenue and cash flow?

John Geuss
In 2014, Class III producer milk prices were above $20 per hundredweight (cwt). Milk protein was worth more than butterfat, and amino acid balancing was becoming the accepted technology for increasing butterfat and milk protein component levels.
John Geuss

Price changes have occurred over the last five years, with a big impact on producer milk checks. The price of butter has increased while the price of cheese has fallen, creating a price spread between butter and cheese unlike any seen before (Figure 1). That spread is continuing to increase. 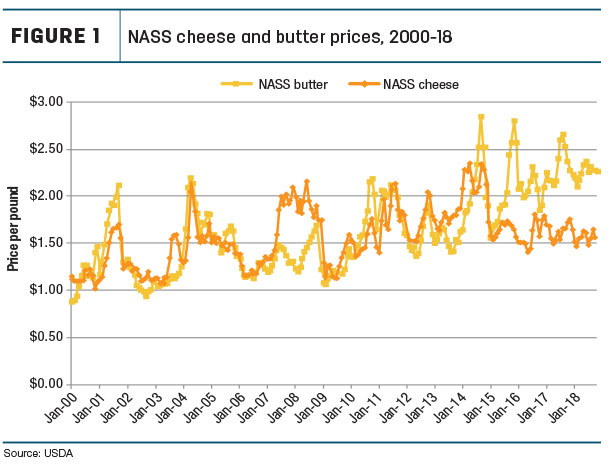 Figure 2 shows the impact of the changing butter and cheese prices on butterfat and milk protein prices. 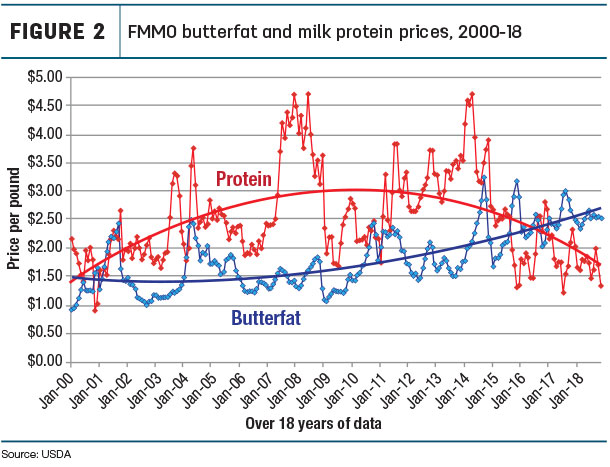 With these price changes outlined above, producer milk prices have fallen to unsustainable levels. With a higher price for butterfat than milk protein, producers and their nutritionists have reformulated their diets to financially manage revenue. The typical changes being implemented are to reduce feed cost while also emphasizing diets that support increased butterfat.

Figure 3 confirms this. The correlation between the cheese price and the Class III price is 96 percent. 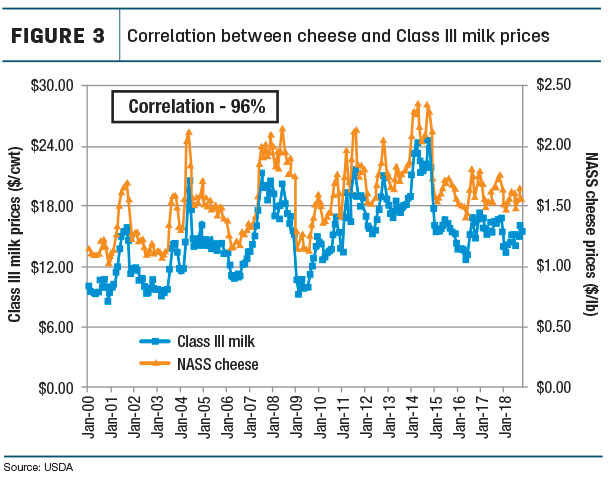 That means the Class III price can be determined with 96 percent accuracy from the cheese price. The price of butter and dry whey have very little impact on the standardized Class III price.

Figure 4 shows the history of the cheese price reported by the USDA’s National Ag Statistics Service. 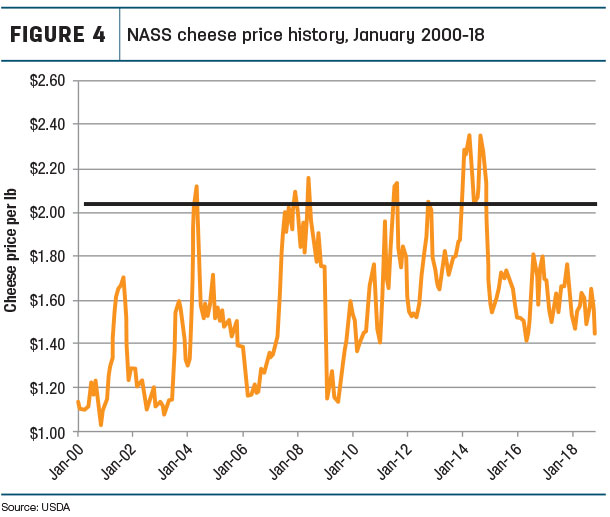 Since January 2000, it has been well above $2.05 per pound numerous times, and that is when the Class III price has also been very healthy.

The only way for Class III milk price to move higher is for the cheese prices to increase, and that can happen only if cheese inventories are reduced.

The formulas for butterfat and milk protein pricing, if also reduced to its simplest form and rounded for simplicity, look like this:

The real key for a producer to increase his or her personal Class III milk price is to increase herd component levels. Figure 5 shows where the percentages of components have ranged over the last 19 years for the Upper Midwest FMMO, the largest federal order during this period. 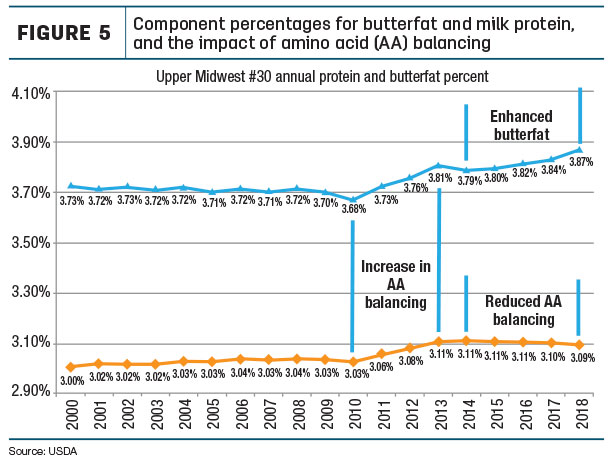 It makes sense to improve butterfat production, but it does not make sense to de-emphasize milk protein production. Amino acid balancing did increase the amount of butterfat and milk protein in near-equal amounts.

Figure 6 shows the October makeup of the milk payment by component. While butterfat is currently the largest income slice of the pie, milk protein is still an important part of milk payment. 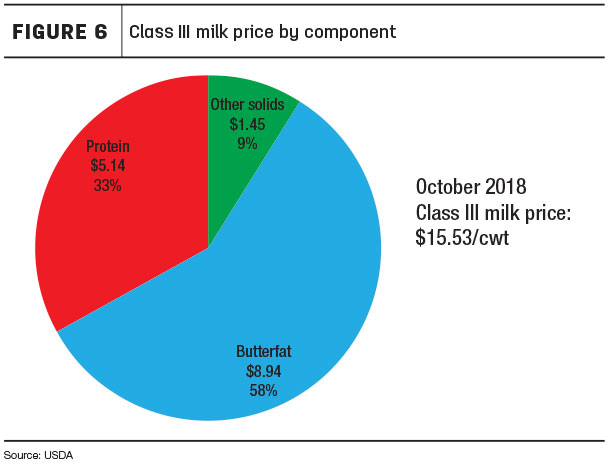 How could revenue and cash flow be improved? Table 1 shows the impact of amino acid balancing at October 2018 producer milk prices.

In that month, protein was worth $1.34 per pound, butterfat was worth $2.54 per pound, and the Class III standardized price was $15.53 per cwt. The increased amount of milk protein, butterfat and milk volume increases in Table 1 were based on the results of numerous trials covering thousands of cows where the impact of amino acid balancing was accurately tracked.

Amino acid balancing is typically associated with protein development because amino acids are the building blocks of protein. However, numerous trials show impact is much broader, including more milkfat, more milk volume and overall health improvements.

Table 1 shows an average increase in revenue of 89 cents per cow per day at October 2018 milk protein and butterfat prices. In this example, the initial revenue per hundredweight was based on 3.5 percent butterfat and 3 percent milk protein. With the impact of feeding an amino acid-balanced diet, the effective Class III price rose from $15.55 per cwt to $16.25 per cwt.

Another advantage is: The amino acid balancing will provide incremental revenue and cash flow as component prices improve over time. As mentioned above, changes in the price of butter primarily change the revenue source between butterfat and milk protein, but it has little impact on the Class III price. Having both bases – butterfat and milk protein – covered will help keep consistency in operations and maximize revenue and cash flow.