Forage challenges for dairy farms in the Southeast

Forages are the basis of livestock production systems because feeding costs represent a significant portion of total production costs. Therefore, forages with superior productivity and quality can reduce feeding costs significantly. The forage industry in the Southeast is well developed with many choices in terms of warm- and cool-season varieties.

Ecological differences across sites in the Southeast highlight the need for local research using a system approach to address the major needs of the local dairy industry. One of the main limiting factors for forage production is low soil fertility. Nutrients generated in dairy farms can address this need and at the same time lead to greater forage production potential. It is a win-win scenario.

Corn is the base of the dairy industry in many regions of the world. There might be a reason for that. Corn is a highly productive plant and has good nutritive value. Therefore, it is hard to beat corn during spring planting. It is important to remember not all corn varieties are the same. That’s why it is very important to check regional variety trials to pick the right one. The joint effort coordinated by the University of Florida and University of Georgia to assess different corn varieties for silage offers valuable information when deciding which variety to plant in the Southeast (University of Florida department of animal sciences).

Picking the right variety might represent profit at the end of the year. Using the 2017 data from University of Florida and University of Georgia trials, there were differences up to 9,000 pounds of milk per acre between the top- and lowest-ranking varieties. These differences are not only due to biomass productivity but also because of forage quality.

Typically in Florida and along the Gulf Coast region, corn is planted in March and harvested by the end of June. What about the other 260 days of the year (Figure 1)? What should dairy producers grow in their farms? 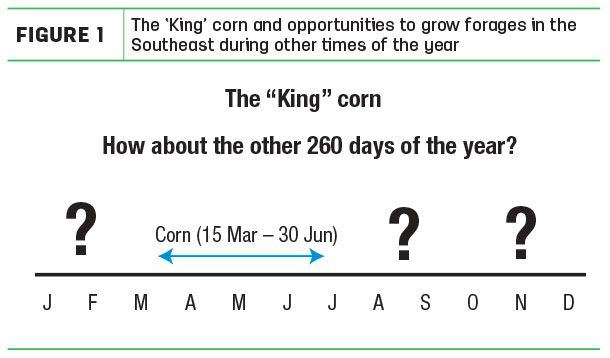 What should we plant after harvesting corn? From July to October, there are still 100 to 120 days of warm weather that could be used for forage production using warm-season forages. Options include sorghum, sudangrass and sorghum-sudan hybrids, pearl millet, sunn hemp, soybeans – or plant corn again (Figure 2).

Planting corn after corn is typically not a good option. Nematodes can build up their population in the soil and harm future corn crops. Sorghum, sudangrass and their hybrids could be an option, but they also suffer from nematodes when planted after corn, although less affected than corn varieties. However, sugarcane aphids have become a problem in the Southeast, resulting in crop losses.

During the cool season, there are numerous opportunities. Small grains such as rye, triticale, oats or black oats are typically preferred because they are early maturing and can be harvested by March, leaving the land ready to replant corn. There are different varieties, and it is always a good idea to check the most recent results from regional trials, such as the one coordinated by the University of Georgia (University of Georgia - statewide variety testing). 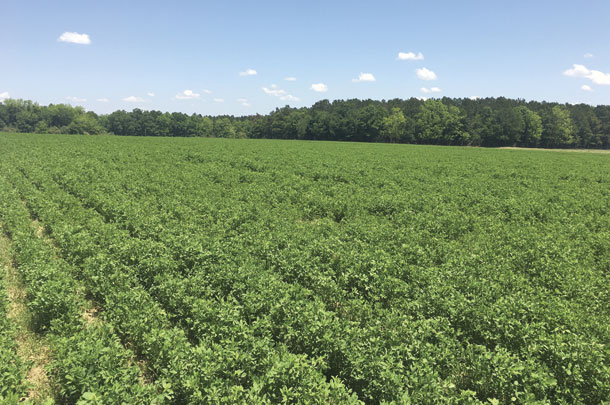 Another option being promoted is alfalfa. Recent research efforts are indicating the viability of growing alfalfa in the South. It is important to remember alfalfa requires better soil fertility and irrigation in order to reach its potential. Because dairies generate surplus nutrients from manure, this could be a great opportunity to grow alfalfa. Alfalfa seed prices dropped recently, and it may be viable even to use as a short-rotation crop, planting it in November and using it for 12 to 16 months. Alfalfa could be used as monoculture or mixed with bermudagrass. Mixing alfalfa with bermudagrass enhances forage quality and reduces the need of N fertilization.

Grazing dairies might be an interesting option in the Southeast. Perennial warm-season grasses will provide forage during the warm season, and these perennial pastures could be overseeded during the cool season with small grains, annual ryegrass or a mix, as indicated in the previous section.

Bermudagrass is one of the most important warm-season perennial grasses in the Southeast, and is an excellent option for grazing dairies. Stargrass is not as cold-tolerant as bermudagrass and is recommended for south Florida (south of the I-4 Interstate).

It is always important to diversify and have irrigation systems in intensive dairy systems. This will reduce weather-associated risks supplying the planned amount of forages. It is always a safe plan to have some backup plan and store some silage or hay in case of weather extremes.

The Southeast provides tremendous opportunities to grow forages. These forages can significantly reduce costs in dairy production. Choice of the right variety, crop rotation and diversification of forages is essential to reduce risks and increase profitability of dairy operations. A well-planed forage program might represent the profit of the operation.

PHOTO 2: Alfalfa Bulldog 805 is grown in south Georgia, overseeded with bermudagrass in its first year of planting. Photo by Jennifer Tucker, University of Georgia.