Dave Natzke
Editor's note: The original version of this article has been updated to include a newly revised schedule of USDA National Ag Statistics Service reports impacting MPP-Dairy margin calculations for November and December 2018.With the partial government shutdown ended – at least temporarily – the USDA’s Farm Service Agency (FSA) could soon be putting final numbers to the Margin Protection Program for Dairy (MPP-Dairy).
Dave Natzke

As of Dec. 10, 2018, FSA had processed about $253.8 million in MPP-Dairy indemnity payments for the year. More than 21,400 dairy producers opted for coverage through MPP-Dairy in 2018, up by more than 2,000 producers from the previous year. (At press deadline, Progressive Dairyman did not have an estimate of MPP-Dairy premiums paid in 2018.)

The total payments represents indemnity payments for milk produced in February-August 2018. Producers who chose premium coverage levels of $7.50 or $8 per hundredweight (cwt) received payments every month during that seven-month period. There were no MPP-Dairy payments issued for January, September or October 2018.

Due to the partial government shutdown, margins for November 2018 had not been released as of Jan. 30, 2019. And, December 2018 margins were originally scheduled to be released on Jan. 31, but it was unclear whether that announcement would be delayed while USDA staff compile survey information and calculate margins. As of Jan. 29, the Program on Dairy Markets and Policy projected December 2018 MPP-Dairy margin at about $8 per cwt. 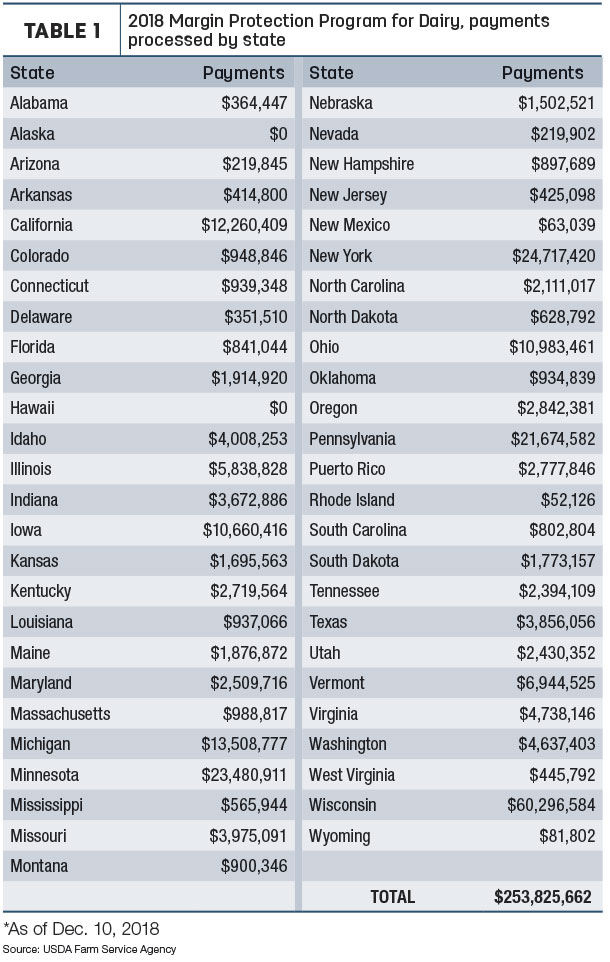 Even if MPP-Dairy payments are not triggered in the final four months of 2018, there may be more payments issued for 2018 milk production. That’s because one group of dairy farmers, by some estimates about 400, enrolled in a separate Livestock Gross Margin for Dairy (LGM-Dairy) program prior to MPP-Dairy program changes included in the Bipartisan Budget Act of 2018. At the time, federal law prohibited producers from participating in both MPP-Dairy and LGM-Dairy. However, the 2018 Farm Bill included a provision providing retroactive MPP-Dairy payments to eligible producers.

Under the 2018 Farm Bill, MPP-Dairy is revised and renamed the Dairy Margin Coverage program (DMC). The USDA must write rules for the new program and establish a sign-up period.

Read: Dairy gets a better margin protection program for 2019 and Temporary agreement means there's hope the USDA can get to work on farm bill dairy provisions.

While producers wait for final rules and the sign-up period, what we do know is the DMC offers much more affordable and higher margin insurance coverage levels than under MPP-Dairy. All dairy producers are eligible to insure margins up to $9.50 per cwt on their Tier I (first 5 million pounds) production history.

Based on projections by the Program on Dairy Markets and Policy as of Jan. 29, monthly income over feed cost margins will gradually increase in 2019, but remain under $9.50 per cwt – the top Tier 1 insurable margin under the new the Dairy Margin Coverage program – into October 2019.

During the three-year period of 2014-17, dairy farmers paid in more than $100 million in administrative fees and premiums to participate in MPP-Dairy, noted John Newton, chief economist with the American Farm Bureau Federation. However, total program payments made to dairy farmers during this time are estimated at less than $12 million.

Under provisions included in the 2018 Farm Bill, eligible dairy farmers will receive partial refunds on premiums paid in 2014-17. Newton estimates the total refunds to be about $60 million. Premiums paid in 2018 are not refundable and neither are administrative fees paid over the entire life of the program.

Refunds will be offered in two forms: Up to 75 percent of the premiums can be directly applied to premiums under the DMC for 2019-23; and/or up to 50 percent can be a direct cash payment. Farmers making this election must consider the total amount of the potential refund compared to the cost of DMC coverage over the five-year life of the new farm bill.