Bev Berens
Empty barns across America are a ghostly reminder of the dairy industry’s rapid exodus. Hollow and empty, they once housed the lifeblood of a farm, and are now begging a return to useful service for the farm family.
Bev Berens
Bev Berens is a freelance writer in Vestaburg, Michigan.

Maintenance will continue to be a necessary expense if barns are to avoid complete disrepair. Land, feed and equipment are still part of the farm’s resource base.

But that resource base – buildings, land, equipment and husbandry skills – is readily interchangeable with a beef enterprise and, in some cases, can provide an alternative after the cows are sold.

Renovating a dairy barn for steers

After a nearly 27-year absence from the dairy industry, Jack Koronkiewicz of Peshtigo, Wisconsin, did just that. It was a $25,000 roof replacement bill that gave him the final push to seek a better return from his farm buildings.

Koronkiewicz penciled out and researched renovating his 100-stanchion, 32-by-200-foot barn for a year, referencing as much material as he could from places like extension services in Wisconsin, Iowa, Nebraska and Illinois, digesting information on steer production in his existing situation.

His 100 acres of cropland would have to provide the feed, or at least most of it. Labor had to be minimized – something he could handle alone working around his off-farm job as a feed mill mechanic. He wanted to sell about 100 head per year.

Financing the project from his own savings, Koronkiewicz began renovating in 2015, beginning by filling the gutters and moving some support beams to accommodate swinging gates. He built 12 pens, each about 13-by-27 feet, and sized to house eight steers. Swing gates split the pens in half, locking down cattle for pen cleaning, then a switch to the opposite side of the pen to complete the cleaning, a job done every four to five days. Round baled canary grass and cornstalks are used for bedding material.

“One of the toughest parts of this transition was the first year with no income,” Koronkiewicz says. “I had to borrow operating money for purchasing cattle and crop production for the first year.”

The first finished steers were sold in May of 2017. For Koronkiewicz, the enterprise is profitable, and his initial operating loan will be paid off soon. He markets finished steers at around 1,200 pounds through a nearby sale barn and a local buyer who ships directly to JBS in Green Bay. Forward contracting groups of cattle is not an option unless he expands the operation as his groups are too small to fill a contract. He is keeping his expansion opportunities open as he approaches retirement.

His homegrown feed supply carries the herd for about 10 months. He has found purchasing additional forage and grain at harvest time, instead of in the summer when demand increases, saves money. 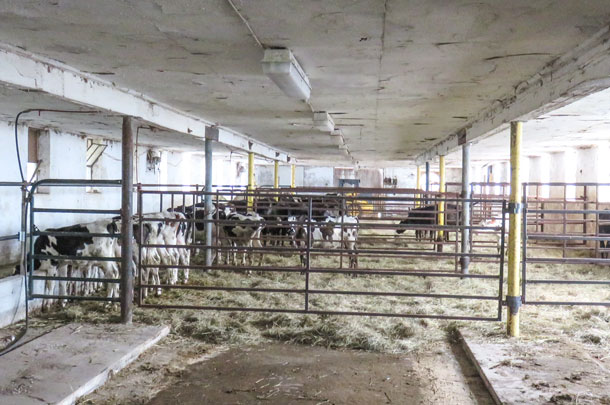 There was a learning curve, and the biggest lesson was to consistently purchase 300-pound starter calves, and to not accept lighter calves or whatever was available.

“When the pen of steers came through that I bought at 220 pounds versus the regular weight, I really took a hit on my bottom line,” Koronkiewicz says. “They didn’t meet the average daily gain of nearly 2.7 pounds that I normally got feeding silage and high-moisture corn. I just don’t think the calves’ digestive systems were ready to transition to a steer ration at the lighter weight when they came in.”

One of Koronkiewicz’s biggest concerns was getting enough ventilation for beef cattle through his old stanchion-style building. He called on Dr. Sarah Mills-Lloyd, DVM, University of Wisconsin Extension, Oconto County. She brought with her Dr. Dave Kammel, University of Wisconsin – Madison, biological systems engineering professor. They helped him design a positive-pressure tube ventilation system, which Koronkiewicz says works very well – proven by zero veterinarian calls in the past two years.

Click on the image below to view in more detail.

According to Mills-Lloyd, the structural soundness of the building being considered for renovation is the first place to start.

“Forgetting to take a big picture look at everything can be very costly if the little details aren’t done right the first time,” she says. “Avoid a hasty decision just because you have an empty structure; you still have to look at all the animal needs even if money is tight.”

For example, it may be tempting to leave in place existing individual water cups instead of replacing with frost-free hydrants. This mistake will be a cost down the road.

According to Kammel, a general rule of thumb in deciding whether to renovate is if the renovation costs exceed two-thirds to three-fourths the cost of new, it is wiser to build a new facility.

Infrastructure for dairy and beef are interchangeable with the right renovations to accommodate for things like low ceiling heights in single and two-story barns, movement of animals and ease of manure handling and pen cleaning, and light placement to accommodate skid steer movement and ventilation upgrades.

“Talk to as many people as you can – veterinarians, nutritionists, bankers, extension people,” Koronkiewicz says. “See what the banker wants and expects in terms of cash flow.

“I don’t have all the time in the world, but I do have enough time to do everything myself, and typical chores take about an hour a day. Make sure the skid steer is maneuverable in the space you have, and have a place to stockpile manure in the winter. My biggest regret is that I didn’t start doing this years earlier.”

PHOTO 1: Structures intended for dairy cattle like Jack Koronkiewicz's barn in Peshtigo, Wisconsin, can be renovated to house beef, providing a return for existing buildings that have a useful life. Photo by Jack Koronkiewicz.