Rumen bugs 101 – feeding the microbes, not just the cow

These micro-organisms include protozoa, bacteria and fungi, and they live inside the rumen, one of the cow’s four stomachs. 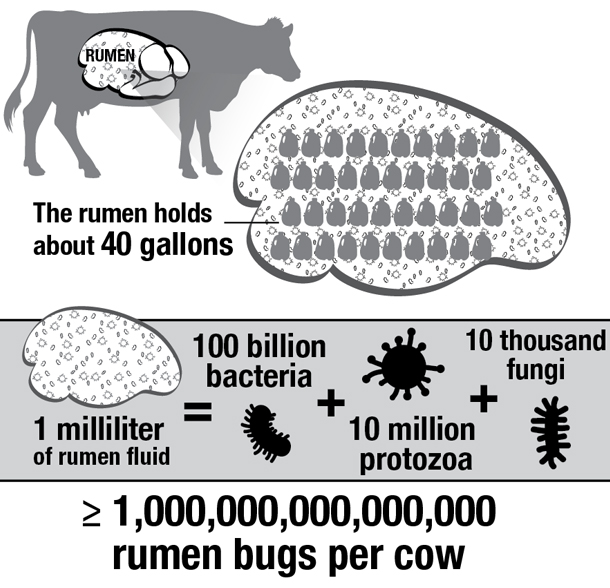 What are the bugs doing?

Although you can’t see them, rumen bugs work together to break down what the cow eats, supplying energy and protein to the cow.

Rumen bugs produce volatile fatty acids – acetic, butyric and propionic – which cows use as an energy source. Rumen bugs also reproduce to create more of themselves – an important protein source.

When rumen microbes have reached the end of their life cycle, they are recycled and used by the cow. Rumen bugs are washed from the rumen to the lower gut and become a protein source for the cow.

What and how we feed cows affects which bugs grow, how feed is utilized and the nutrients available to the cow.

What can go wrong?

A lot can go wrong when it comes to rumen bugs. Sensitive to pH, a change in rumen pH can wipe out the entire population of rumen bugs fairly quickly.

Bloat is a physical manifestation of rumen bugs gone wrong. Gas is a byproduct of rumen bugs breaking down feed, and when an animal cannot rid itself of the excess gas, bloat occurs.

When the population of bacteria gets out of balance and the lactic acid utilizers aren’t present, rumen acidosis starts to occur.

If the pH of the rumen gets below 5.4 and stays there, the microbe population in the rumen can become lactic acid producers. A build-up of lactic acid can paralyze muscles, including the diaphragm. As a result, the animal can stop breathing and die because of an imbalance in the rumen bug population.

Rumen pH is never constant – it goes down after each meal and starts to rise again when the animal chews its cud. The goal for rumen pH should be to stay at 5.9 or above 6.0. While it isn’t realistic to monitor rumen pH on a farm, there are management strategies you can implement to optimize rumen bug environment.

What can I do?

The primary goal should be to minimize any abrupt changes in the diet. Anything that causes an abrupt change in the animal’s diet can make things go awry quickly. Consuming multiple small meals throughout the day or “snack eating” can be beneficial to optimize rumen bug populations.

After a day of small, snack-sized supplement portions, cattle don’t return famished to eat a “super-sized” portion – which can cause a broad shift in rumen pH and, ultimately, result in health challenges.

The whole science of nutrition is having a balanced diet and providing nutrients to the cow to keep rumen microbes from going bad.