Annual plant production on native rangelands is dynamic and influenced by many factors. However, the most critical determining factor for plant production in the western U.S. is the amount and timing of spring and summer precipitation, which can be highly variable from year to year. As livestock producers who are currently managing through a drought well know, precipitation is the main driver in the amount of forage available for grazing livestock.

In addition to the temporal, year-to-year variability of precipitation, many rangelands exhibit spatial variability in plant production because of differences in soil type, species composition and topographic position across a landscape.

A long-term research project was developed at the University of Nebraska – Lincoln Barta Brothers Ranch in the eastern Sandhills near Rose, Nebraska, to better understand the spatial variability of plant production and how plant production responds to variable precipitation among the different topographic positions. 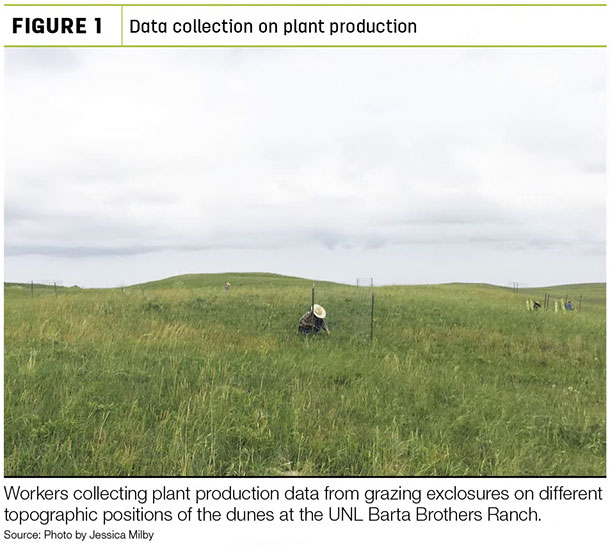 Over the 17 years of the study (2001 through 2017), average plant production was approximately 1,800 pounds per acre, but there was a nearly threefold difference between the years with the lowest and highest plant production.

When analyzing the spatial variability in plant production at the different topographic positions, average plant production was 48 percent greater on interdune valleys compared to the slope and dunetop positions (Figure 2). 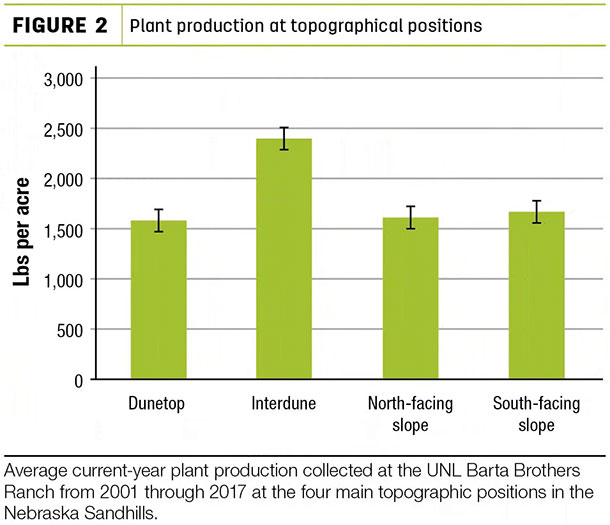 Additionally, production on interdune valleys was more sensitive to increasing precipitation and had a greater positive response to years with increased spring precipitation than the slope and dune topographic positions.

The spatial differences in plant production among the topographic positions highlight the importance of considering spatial variability in estimating forage production on rangelands.

While variability in plant production as a result of temporal weather patterns and spatial differences across a landscape typically cannot be controlled, the management response to these variable conditions is one of the grazing manager’s most important decisions.

Overall, the goal of adaptive grazing management is to sustainably match forage demand from grazing animals with the available forage supply. This is difficult in arid and semi-arid environments, where there can be large annual differences in forage production.

Additionally, spatially diverse landscapes like the Sandhills can influence plant production based on the topographic position of the landscape.