Beef production in 2021 is expected to total 27.95 billion pounds, up 55 million pounds from the previous month’s forecast. This increase is driven by a more rapid pace of cow and bull slaughter as well as by heavier cattle dressed weights. Beef cow slaughter in December was up more than expected, likely reflecting the drought in the Western region of the country. According to the USDA Agricultural Marketing Service (AMS) Livestock Slaughter report, total estimated federally inspected slaughter for December was up 1.5% above a year ago, while cow and bull slaughter rose 5.8% and 5.3%, respectively, above last year’s levels. Heavier dressed weights also contributed toward the increase in beef production. 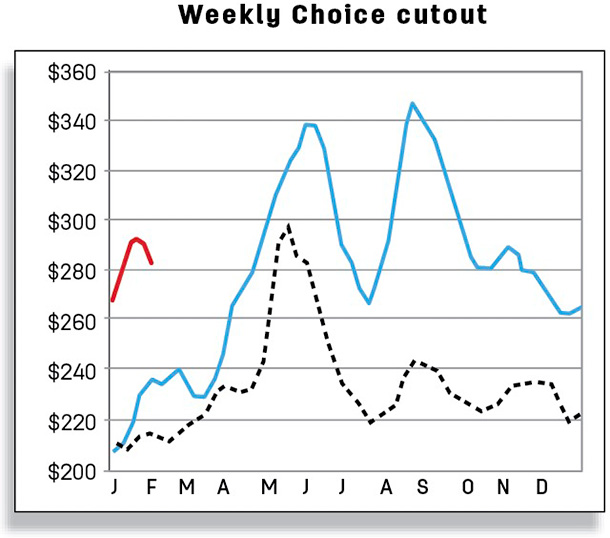 Net placements were raised for the 2021 fourth quarter, partly on stronger-than-expected cattle movement into feedlots during November. Given the anticipated rise in fourth-quarter net placements, fed cattle marketings and fed cattle slaughter expectations are raised in the second quarter and, coupled with a stronger expected pace of marketings in the second half of the year, the beef production forecast is raised for 2022. The forecast for the 2022 beef production was raised to 27.165 billion pounds, up 165 million pounds from the previous month.

This expansion in beef production was the result of an increase in the pace of slaughter, likely supported by continued strength in packer demand. The average price for all grades of live steers sold in the 5-area marketing region for December was reported at $139.36 per hundredweight (cwt), up 27.8%, or $30.31, from December 2020. As an accompanying figure shows, from August to December, the 2021 average 5-area market price exceeded the 2015-19 average steer price. During this period, the average 5-area steer price increased 12 percent, or $14.91. 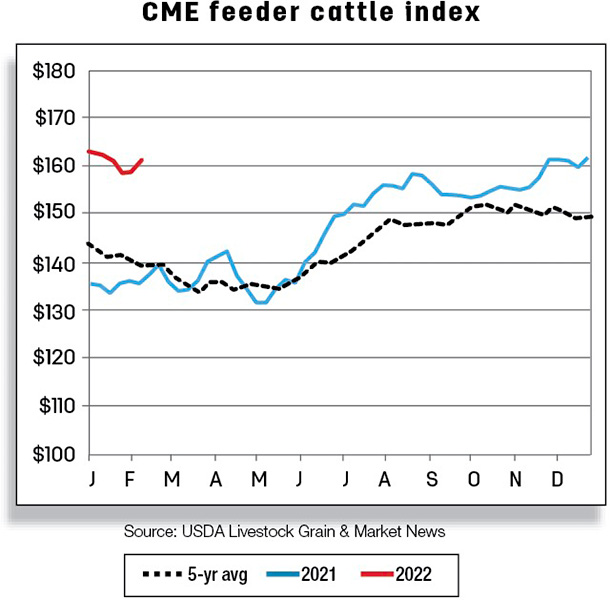 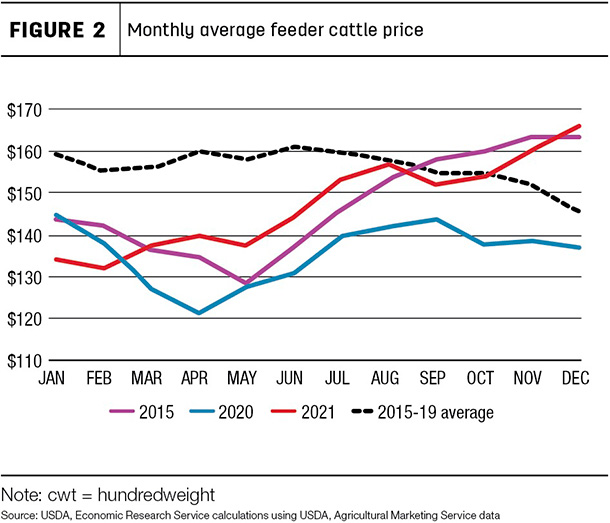 These increases in fed steer prices are based on expected continued strength in packer demand. The 2022 annual forecast was raised by $1.50 to $136.75 per cwt from the previous month. 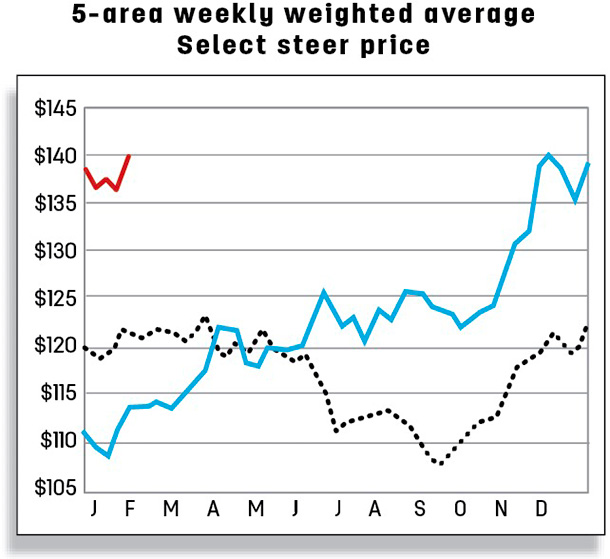 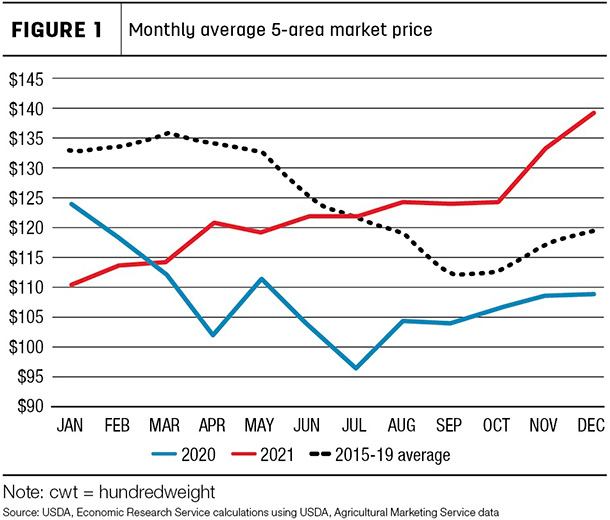 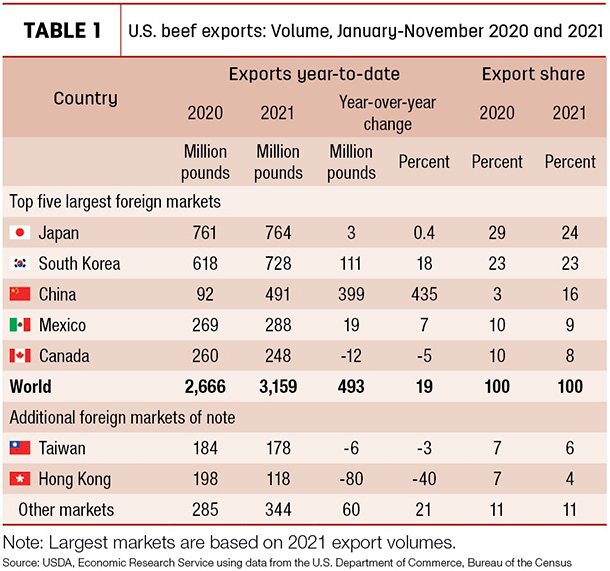 In November, U.S. beef exports were 298 million pounds, 8% above a year earlier and 15% above the five-year average. Among major destinations, larger year-over-year shipments to China, South Korea, Japan, Canada and Taiwan more than offset reduced exports to Hong Kong and Mexico. As a result, cumulative exports for January to November grew to 3.159 billion pounds, up 18% from a year ago and 19% above the 2016-20 average.

Further, year-to-date exports to other markets are up 21%, or 60 million pounds, from last year and 9% above the five-year average. This suggests demand for U.S. beef extends beyond major economies despite logistical issues, robust U.S. beef prices and the global impact of the pandemic on hotels, restaurants and institutional demands.

U.S. beef shipments to South Korea set a record for the month of November. In addition, South Korea’s aggregate beef imports from the world through November were also at their highest recorded levels. U.S. beef sales to Japan were 8% higher in November than last year, bringing year-to-date shipments 3% above 2020 levels, the first time this year cumulative imports exceeded 2020. U.S. exports to Mexico in November were down 37% from a year ago. Although year-to-date shipments to Mexico were up 7% from a year ago, they are down 20% from the five-year average. 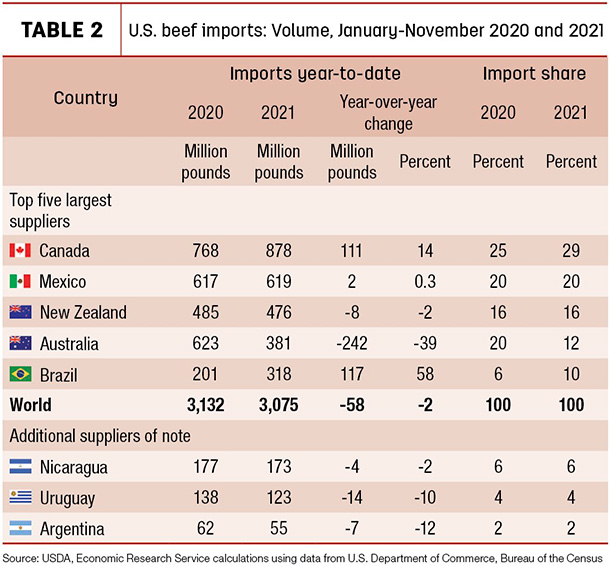 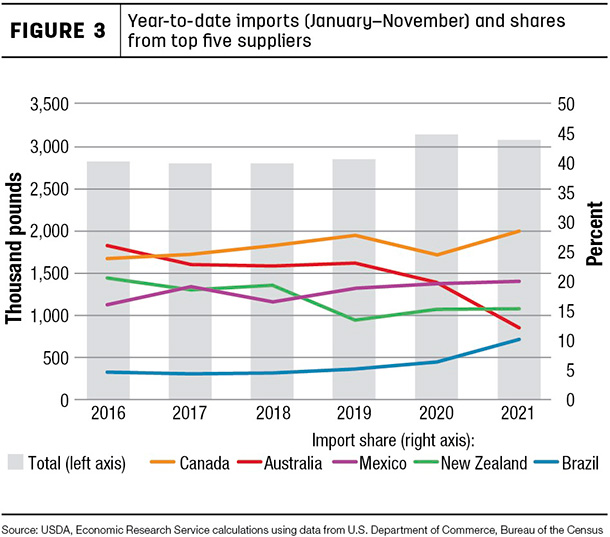 An accompanying figure shows the import shares from the top five suppliers over the last six years. These imports from Australia are historically low. After a contraction in inventories due to drought, Australia has been experiencing nationwide cattle herd rebuilding, which has resulted in limited exportable supplies. Historically, Australia was one of the top two suppliers of beef imports to the U.S. So far this year, it has shipped 380 million pounds, outpaced by Canada, Mexico and New Zealand.

Imports from Brazil have been increasing since February 2020 after the ban on fresh beef imports was lifted. This has resulted in significant growth in the share of imports originating from Brazil. Shares from Mexico and New Zealand have remained consistent with the previous year, while imports from Canada have been relatively strong in 2021.

The fourth-quarter 2021 beef imports were increased by 40 million pounds to 870 million, based on current trade data showing stronger-than-expected imports. Annual imports for 2021 were increased to 3.355 billion pounds, slightly higher than 2020 annual imports and the fourth-largest annual import volume overall. The beef import forecast for 2022 was left unchanged at 3.265 billion, a year-over-year decrease of about 3%.