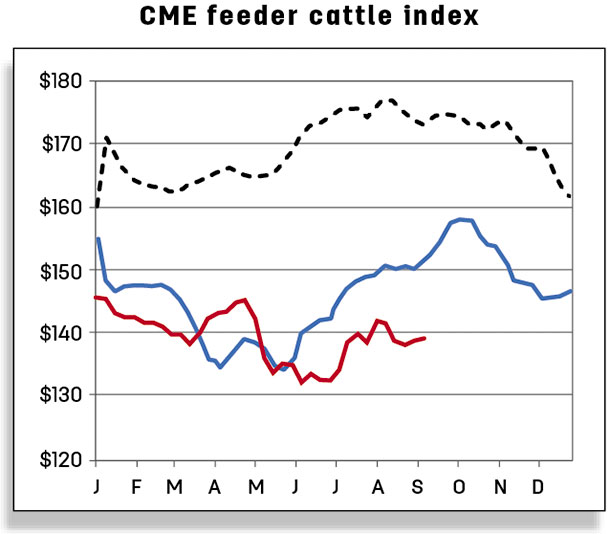 Based on the number of beef cows on July 1, ERS estimates that 9.7% fewer beef heifers entered the herd in first-half 2019 than over the same period last year. The ERS webpage “Livestock & Meat Domestic Data” has a table titled “Heifers Entering the Herd,” which estimates heifers for beef cow replacement that entered the herd this year (January-June) at 2.5 million head.

According to the Cattle report, producers intend to keep about 4.4 million beef heifers as beef cow replacements, 4% fewer than producers intended to keep at this time last year. Producers’ intentions are signaling that herd expansion since 2014 likely has peaked.

With fewer heifers retained for beef and dairy cow replacements, the other females are being placed into feedlots. According to the July NASS Cattle on Feed report, the number of cattle on feed in feedlots with capacity of 1,000 head or more totaled 11.5 million head on July 1, 2019, up almost 2% from 2018. This is the largest number of cattle on feed for the month since the series began in 1996. 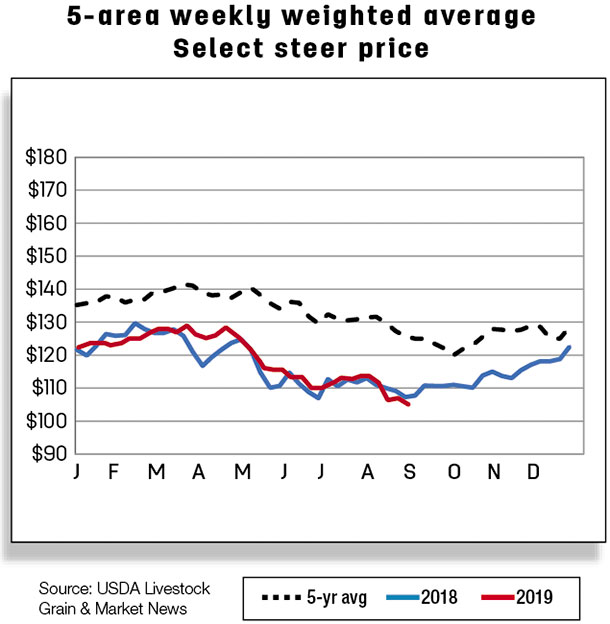 The NASS report also estimated the classes of cattle on feed as 7 million steers and 4.5 million heifers. Compared to 2018, the number of heifers on feed increased by 8%, while steers declined by almost 2%. Heifers represented 39% of cattle on feed on July 1, compared to 37% last year.

The ERS webpage “Livestock & Meat Domestic Data” has a table titled “Feeder Cattle Supplies Outside Feedlots,” which estimates the number of cattle available to place in feedlots at 37.1 million head, only 100,000 head, or 0.3%, larger than this time last year.

The 2019 beef production forecast was reduced by 86 million pounds from last month to 27 billion pounds, based primarily on lighter expected carcass weights through 2019 and a slower pace of fed cattle slaughter in the third quarter. For the week ending July 27, average carcass weights improved to 809 pounds, but weights were 2 pounds below the same week last year. For the same recent week, steer and heifer weights were 5 and 4 pounds, respectively, below the counterpart week last year.

The forecast for 2020 beef production was raised by 145 million pounds from last month’s forecast to 27.6 billion pounds based on an expected quicker pace of fed cattle slaughter in first-half 2020 that more than offset a slower anticipated pace of fed cattle slaughter in late 2020. Based on the cattle report, the 2019 calf crop is estimated slightly smaller by 102.7 thousand head, or less than 1% smaller than the previous year, suggesting that marketings in the latter part of 2020 will be lower than previously expected. 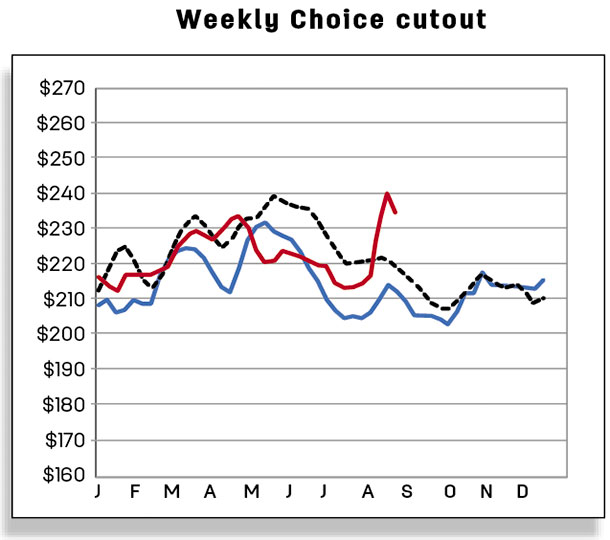 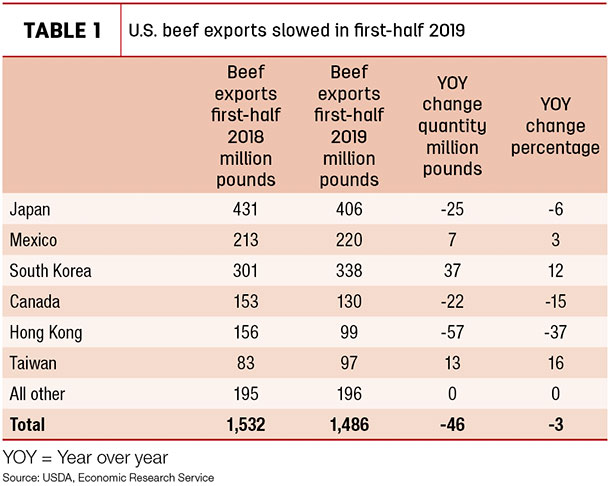 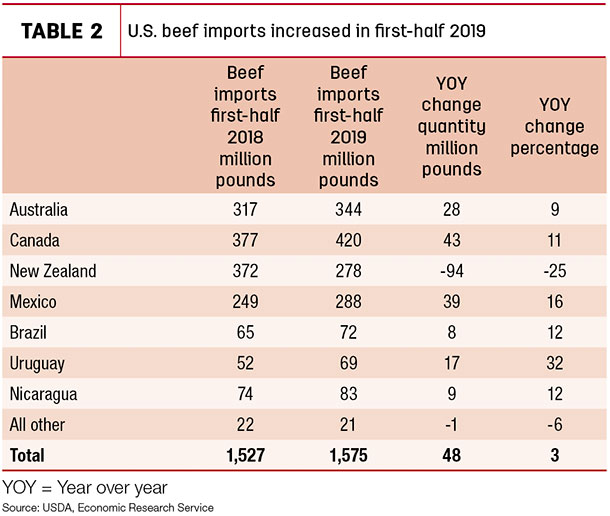 New Zealand is exporting more product to Asian markets, resulting in lower shipments to the United States. Imports from Australia declined sharply in June after three consecutive months of increases. With slightly lower-than- expected second-quarter imports, forecasts for the outlying quarters were unchanged. The 2019 U.S. beef import forecast is 3.045 billion pounds; the forecast for 2020 imports is unchanged from the previous month at 2.96 billion pounds.

June was the first month of 2019 where both exports and imports declined year over year. At 150,436 head, U.S. cattle imports in June 2019 were 4,249 head lower than year-earlier levels. Lower imports from Mexico fully offset the increases from Canada in June. However, higher year-over-year imports in the first five months of 2019 offset this decline, resulting in first-half imports that were 165,880 head above the previous year. The 2019 and 2020 import forecasts were left unchanged from the previous month’s forecast, respectively at 2.1 million head and 2.15 million head.

U.S. cattle exports in June were 1,958 head lower than year-earlier levels to 15,887 head. Exports were higher year over year in January through June, which resulted in over 2,300 head more cattle exported during the first half of 2019. U.S. cattle export forecasts were left unchanged from the previous month’s forecast at 265,000 head for both 2019 and 2020.