Email Dave Natzke
Progressive Dairy’smonthly review of the numbers to provide some additional transparency on your milk check.

The May Class III price moved above the Class IV milk price for the first month since last October. The May Class III-IV price spread slipped to just 22 cents per cwt, an eight-month low.

With higher individual milk class prices, May blend or uniform prices at standardized test were the highest ever (Table 1), increasing in a range of 31-79 cents per cwt across all 11 FMMOs compared to April. The high uniform price for May was $29.76 per cwt in the Florida FMMO #6; the low was $25.34 per cwt in the Upper Midwest FMMO #30.

With butterfat, protein and somatic cell count (SCC) premiums, the uniform prices “at test” will be about $2 per cwt higher than statistical uniform price in many FMMOs.

May baseline producer price differentials (PPDs) were lower, dipping into negative territory in the Pacific Northwest (Table 1) and within Upper Midwest, Central and California FMMOS when subtracting zone differentials. Also, we remind you each month, whether positive or negative, individual milk handlers apply PPDs and other deductions to milk checks differently. 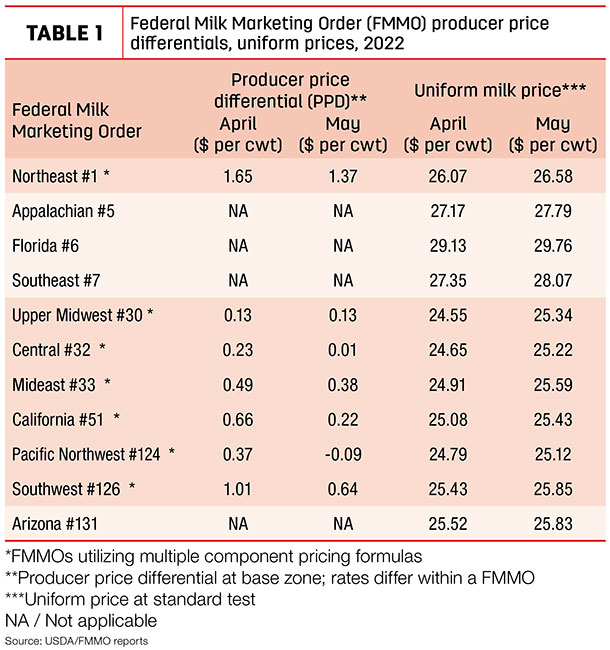 The small May Class III-IV price spread brought a lot of Class IV milk back into the FMMO pools but provided enough incentive to keep some Class III milk out. 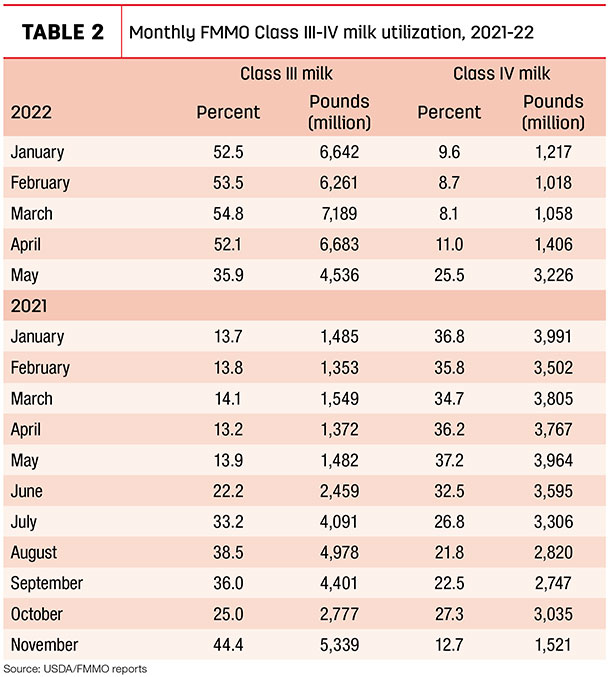 Looking at May data, about 12.65 billion pounds of milk were pooled on all federal orders, down about 184 million pounds from April (there was one more day of milk production in May).

If those prices hold, the Class III-IV price spread would jump to $1.48 per cwt, providing incentives for the return of Class IV depooling.

Longer term as of June 14, Class III futures prices averaged $24.02 per cwt for the second half of 2022, with Class IV futures averaging $24.85 per cwt. The monthly Class III-IV price spread ranges between 64 cents and $1.55 per cwt, extending the Class IV depooling incentive well into 2023.

Declining fluid milk sales and Class III-IV milk price relationships that incentivize depooling are cutting into the percentage of U.S. milk production marketed through the FMMO system. Watch the Progressive Dairy website for “Milk marketings through FMMOs are falling and here’s why.”