Supported by higher prices for all classes of milk, FMMO statistically uniform milk prices were up in April and close to September 2014 record highs:

Based on Progressive Dairy calculations, the Class I mover calculated under the “higher-of” formula would have resulted in a Class I base price of $24.89 per cwt, 51 cents more than the price determined using the “average-of plus 74 cents” formula. The effect within individual FMMOs depends on Class I utilization, with the largest impact on Appalachian, Florida and Southeast orders.

Offsetting the higher values, average butterfat, protein and nonfat solids tests in pooled milk were down slightly from March in a handful of FMMOs providing preliminary data.

With higher individual milk class prices, April blend or uniform prices at standardized test were the highest in nearly eight years (Table 1), increasing in a range of 86 cents to $1.89 per cwt across all 11 FMMOs compared to March. 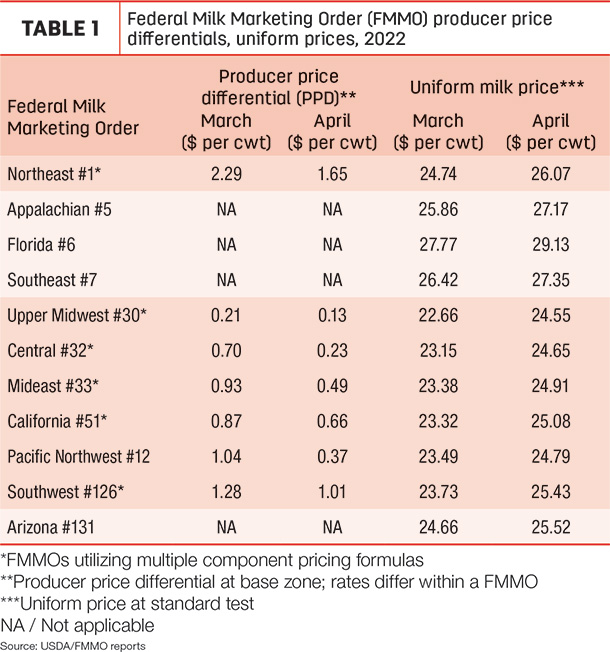 April baseline PPDs were positive but slightly lower than March, down in a range of 8-67 cents (Table 1). As we remind you each month, PPDs have zone differentials within each FMMO. Also, whether positive or negative, individual milk handlers apply PPDs and other deductions to milk checks differently.

The April Class III-IV price spread slipped to just 89 cents per cwt, a five-month low and cutting into incentives for Class IV depooling.

You can get a general picture of FMMO pooling-depooling in a couple of ways: on a volume basis, comparing monthly pooling totals to previous months; and on a percentage basis, comparing the percent utilization of a specific class of milk relative to all milk pooled that month.

Looking at April data, about 12.8 billion pounds of milk were pooled on all federal orders, down about 290 million pounds from March (there was one less day of milk production and marketing in April).

Class IV milk pooled across all FMMOs increased to about 1.406 billion pounds (Table 2) in April, representing about 11% of total FMMO milk marketings, up 3% from March and the largest volume since November 2021. It’s still less than half the average Class IV milk pooled monthly in 2021. 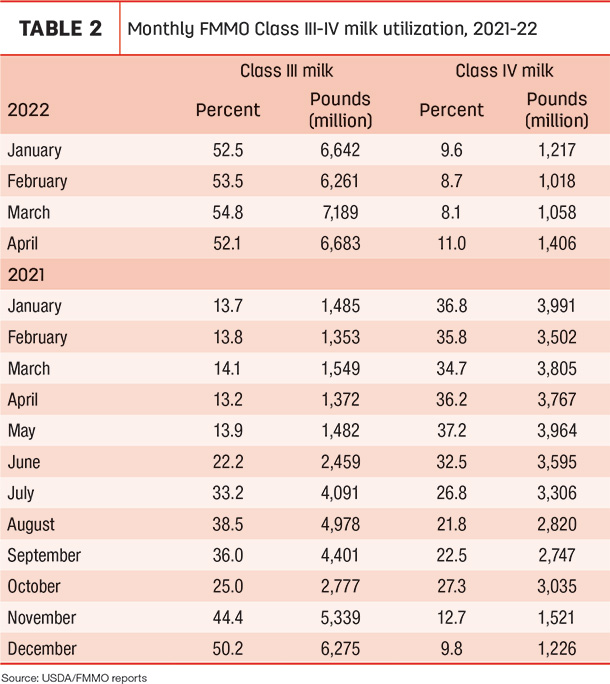 At 6.683 billion pounds, April Class III pooling fell about 500 million pounds from March. As a percentage of utilization, Class III milk represented about 52.1% of the total FMMO pool, on par with recent months.

The outlook for prices is strong but mixed for May milk marketings. The advanced Class I base price is up, but a slightly lower Class IV price is likely to offset a price gain in Class III.

With Class I zone differentials added to the base price of each FMMO principle pricing point, the actual Class I price will average approximately $28.27 per cwt across all FMMOs, ranging from a high of $30.85 per cwt in the Florida FMMO #6 to a low of $27.25 per cwt in the Upper Midwest FMMO #30.

In May, the newer Class I mover average-of plus 74 cents formula will help boost Class I prices paid to producers compared to the previous higher-of formula. Based on Progressive Dairy calculations, the Class I mover calculated under the higher-of formula would have resulted in a Class I base price of $24.28 per cwt, 17 cents less than the price determined using the average-of plus 74 cents formula.

May Class II, III and IV milk prices won’t be announced until June 2. At the close of Chicago Mercantile Exchange (CME) trading on May 12, the May Class III futures price was $24.95 per cwt, up 53 cents from April. The May Class IV futures price settled at $24.80 per cwt, down 51 cents per cwt. If those prices hold, it would mark the first month the Class III price moved above the Class IV price since last October. And the Class III-IV price spread would shrink to just 15 cents per cwt, eliminating most depooling incentives.