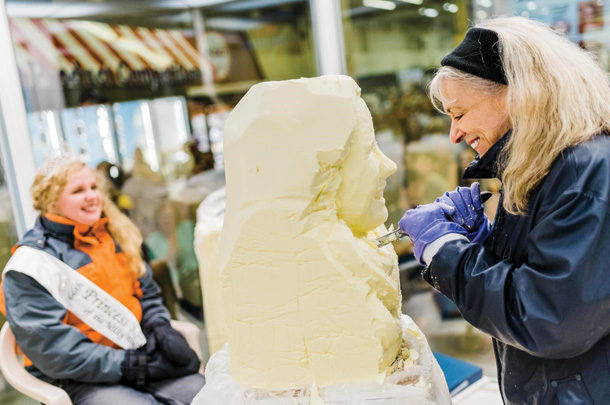 Audrey Schmitz
Linda Christensen has carved out a niche audience for herself over the past 50 years as the sole “butter head” sculptor of Princess Kay and finalists at the Minnesota State Fair.
Audrey Schmitz

Little did she know when she stepped into a 40ºF rotating cooler in 1972 that she would carve 41,500 pounds of butter into the resemblance of more than 550 young women involved in dairy farming over the next 50 years.

Each year, her work drew large crowds to the Dairy Building where the Midwest Dairy Association sponsors the butter carving in front of fairgoers.

“There are people who have art in galleries and have gallery showings, but I have tapped into an audience that is entirely different with this butter sculpting. I had people outside the butter booth who came in from rural areas from all over the state,” Christensen says. “They loved watching what I do and are involved with it in ways that people don’t normally get involved in art – because that’s their hometown girl in there or family member.”

After her many years of cooler conversations with her female subjects, Christensen feels she is a voice for dairy farming among urban dwellers like herself.

From her learnings, Christensen has come to have much admiration for the people who dairy farm.

“There is probably not a harder-working group of people that make such a commitment 24 hours a day, practically seven days a week to their animals, and it took me a while to get it,” Christensen says.

Over the years, Christensen also has seen the level of involvement of the finalists shift from the young women wanting to take on traditional roles of a schoolteacher or nurse to more active roles on farms and in the industry.

“There [were] only maybe a few of the early princesses who talked about taking over a farm. I know a few of them said they hoped they could marry a dairy farmer, but there wasn’t the talk of being a dairy farmer like there is now,” Christensen says. “The number of women who want to go back into dairy and maybe even take over their family farm that goes back generations is way more common today.”

Christensen’s favorite thing about butter sculpting has been the stories that involve these women and the stories the butter heads themselves create.

“Some of those heads have gone to New York – there is a butterhead that has gone to the David Letterman Show, and one head spent five years as an exhibit at the Minnesota Historical Society in a glassed-in freezer case,” Christensen says. “Sometimes they wind up on wedding tables or being part of a fundraiser for a church breakfast or town corn feed. That is what makes them so unique. It’s not like a sculpture you would do out of clay and there it sits. They have a life.”

In the early years, the first cooler Christensen worked in was six-sided with glass on four of the sides, was raised so people could stand around and watch, and the floor rotated in a circular motion. The temperature was set at 38ºF in the cooler, and there were lots of fans blowing inside so there was a windchill to keep the butter cool.

“I had these stainless steel bowls I filled with butter scraps from the sculptures that I passed out the back door of the cooler,” Christensen said. “There was a kitchen and crew behind there that buttered Saltines crackers and put them on trays. The princesses at the fair then walked around and handed them out to the crowd.”

Later, a bigger and better cooler was bought and placed more central in the state fair building as the butter sculptures got to be more popular. It was glassed in on more sides and has a smoother turntable underneath, Christensen says.

The first day of every state fair, Christensen started sculpting the winner of the “Princess Kay of the Milky Way” title, who was crowned the evening before. She then sculpted the remaining 11 finalists the rest of the fair. Starting at 9 in the morning, she would spend approximately six hours working on each head and complete one a day.

In order to do her best work, Christensen says the butter needs to be real butter and that it also needed to be salted.

“When it’s not salted, it is really gummy, sticks to my tools and is really hard to work with,” Christensen says. “It also can’t be old butter and cannot have been previously frozen. One year, they made the butter way in advance and froze all the blocks and stored them. When I started carving, everything started falling apart in layers, and they had to rush more butter blocks.”

To make all her big cuts and start to get the shape of the head, Christensen would use a clay wire, which she describes as being like a piano wire with handles on each end.

“I then used a regular butcher knife, a little paring knife and clay tools,” Christensen says. “One of my jokes is that clay tools are like these stiff wire hoops on a stick – and everything at the fair is on a stick, including my tools.”

The most challenging part of the butter sculptures for Christensen is getting the mouth just right.

“I think it’s because people’s mouths change so much as they talk and smile, and the muscles there change the shape of the face,” Christensen says. “That’s where I have to really sit for a while and look really hard. I warn the princesses I might be scowling at them, but it’s nothing they did because I’m just looking hard to figure out what it is that makes their features their own. Once I get that, I can put in the rest of the face much more easily.”

After 50 years, Christensen has many memories of her time in the butter booth, so she wrote a book titled Princess Kay and Me that details her art career, features past dairy princesses and how she gained an appreciation and passion for dairy and the people in it.

“There’s a lot of things I learned writing the book that I think are interesting, and I am getting feedback from people who knew nothing about dairy farming [who] found it fascinating,” Christensen says.

When asked about how she felt to be retiring from the job at 79 years old, Christensen says that first and foremost, she is astounded she made it 50 years in the first place.

“A lot of my self-identity was also wrapped up in being the Minnesota State Fair butter sculptor. It’s been bittersweet,” Christensen says. “I looked forward to it every year, and it’s a social life that I’ve, in a way, kind of given up.”

Last year, Christensen carved her last butter sculpture at the state fair and passed the butter knife on to Gerry Kulzer.

“I am so grateful to dairy farmers for allowing me to spend my whole adult life doing something I love to do, and it’s such an honor to be honored by them,” Christensen says.