Nationally, the average 2021 test-day herd SCC was 179,000 cells per milliliter (mL), up 1,000 cells per mL from 2020, according to the Council of Dairy Cattle Breeding and USDA’s Animal Improvement Programs Laboratory. Although small, the year-to-year increase was the first since 2014-15.

Despite that increase, the U.S. average is now down 143,000 cells per mL since peaking at the turn of the century. Prior to 2021, national average test-day herd SCC had declined every year except three since 2001.

Test-day data from all herds enrolled in DHI somatic cell testing during 2021 (98.4% of all DHI herds and 96% of DHI cows) were examined to document the status of national milk quality. All test-day data within herds on any DHI test plan (including owner-sampler recording) were included.

These tables include individual state data for herd test days, average number of cows per herd, average daily milk yield, butterfat and protein percentages and average SCC on test day. It also breaks out two categories of SCC levels: the percent of days over 750,000 cells per mL, the current federal limit for bulk tank SCC for Grade A producers; and the percent of test days over 400,000 cells per mL, the current maximum level for milk used to produce dairy products exported to the European Union (EU) and other markets. (A few states have lower SCC limits compared to federal requirements.)

Herd test days higher than the federal limit may overestimate the percentage of herds shipping milk exceeding that limit because milk from cows treated for mastitis is excluded from the bulk tank, even though it is included in DHI test data. 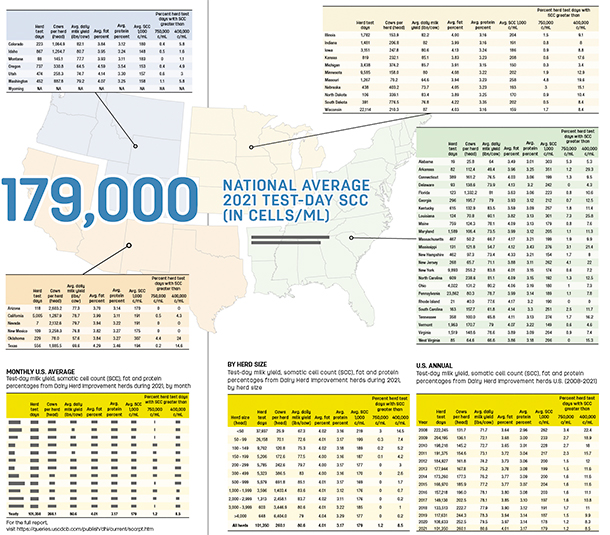 Average annual SCC in 13 states was at or less than the national average of 179,000 cells per mL, led by Idaho, Vermont and Michigan. Arkansas, Oklahoma, Alabama and Louisiana averaged more than 300,000 cells per mL.

Year-over-year annual average SCC increased in 21 states, rising by 20,000 cells per mL or more in Massachusetts, Connecticut and Nevada.